Increase in GDP could see the UK avoid recession 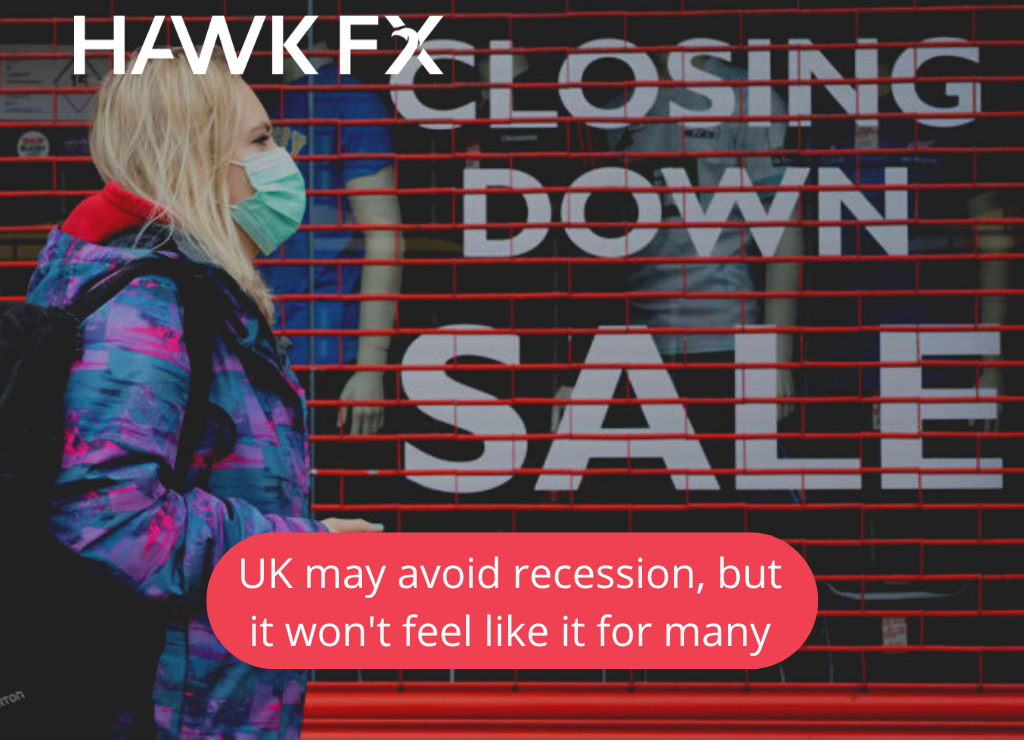 GBP – GDP increases by 0.1%, which could see the UK avoid recession

Last week, we were expecting to see another fall in GDP, but instead, November GDP rose by 0.1%.  This was unexpectedly positive and means that we may not see a contraction in the fourth quarter.  This may also see the UK avoid a technical recession for now.  The increasing number of strikes in December may have had an impact on activity, particularly in the hospitality sector.  So far, earnings results for the Christmas trading period have been better than expected. This week, retail sales are expected to increase in December, helped by the World Cup.  Overall, retail sales are still likely to have contracted during the final quarter, with consumer confidence at historically weak levels.

As one of the key pieces of data watched by the Bank of England, inflation this week will be closely watched.  We expect to see inflation fall slightly to 10.4% from 10.7% last month.  The core measure is also likely to have fallen slightly to 6.2% from 6.3%.  The labour market data is also likely to show demand softening though the impact on pay growth will be gradual. Average earning growth is expected to remain at 6.1%.  Markets expect unemployment to remain at 3.7% with a slight increase in the number of claimants of around 15,000.

The combination of downward trends in inflation along with softer economic data will likely give way to more caution from the Bank of England.  This will continue if inflation continues to fall, whilst the impact of past rate hikes feeds through to economic activity. There is also uncertainty about whether domestic price pressures will slow sufficiently even after all the rate hikes that have occurred. Bank of England Governor Bailey will testify this week on financial stability.

EUR – ECB minutes to give an update on the inflation outlook

This week, the final December CPI readings will likely confirm the preliminary flash estimate showing a fall from 10.1% to 9.2%.  We will likely see a rise in core CPI from 5.0% to 5.2%. With core inflation still accelerating in the Eurozone, the European Central Bank may decide to do another half-point rate hike at their next meeting. The minutes from the ECB December meeting will also be published, so we may see further thoughts on Core Inflation within those.

We expect a further improvement in economic sentiment from the German ZEW survey, though this will be from -23 to an expected -15. Last week, we saw Eurozone industrial production bounce back in November, rising by 1.0% for the month. Overall, the survey evidence suggests the Eurozone economy may have entered a recession, although the recent data suggested it may be a milder downturn. ECB President Lagarde will be speaking this week at Davos.

Last week was another positive one for assets with further signs that US inflation continues to fall and Fed interest rates may be near a peak. December inflation fell from 7.1% to 6.5% and the core rate (excluding food and energy) dipped from 6.0% to 5.7%. Both figures were in line with forecasts and suggest we may see a slowing in the pace of rate hikes at the Fed’s next policy update. One of the Fed officials, Harker, has already said he favours a smaller 0.25% hike at the next meeting.

This week’s data is expected to show further softening of demand.  We expect a fall in December retail sales of 0.4% and industrial production of 0.3%. Higher interest rates will likely continue to dampen housing activity, with housing starts expected to fall for the further month in a row.  The NY Fed manufacturing and Philadelphia Fed business surveys are also due. There are a number of Fed speakers this week and