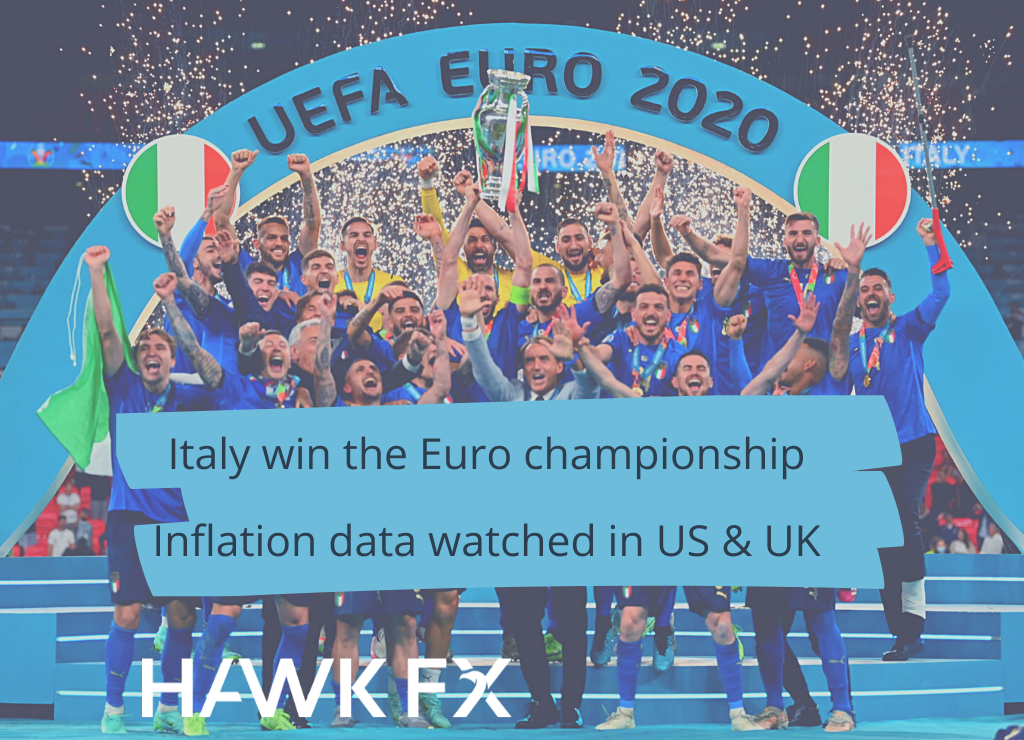 Last week saw much weaker-than-expected GDP data for May.  It rose by only 0.8% compared to an expected 2.5% while April growth was also revised down. Some bond markets including UK gilts, have also seen sizeable declines in yields. The market is reassessing growth and inflation trends.  Some see this as a sign that central banks are right in saying that the present rise in inflation is ‘transitory’. It may also be the case that recent sharp rising in Covid cases will lead to a slowdown in growth in the second half of 2021. In contrast, the construction PMI rose to 66.3 in June, which is its highest since 1997, while services PMI also remained strong at 62.4.

On Thursday, the labour market report may show further signs of inflationary pressures. Business activity surveys continue to highlight difficulties in recruitment which is causing upward pressures on wages. The changes in the way the report is collected during the pandemic, may not reflect this underlying position. We may see a revision in the estimated level of employment and possibly a small rise in the unemployment rate. Overall, the labour market situation looks particularly uncertain, though the report this week may not be a reliable indicator of what is going on right now.

In the UK, we will see annual CPI inflation, which  is expected to have risen further in June. We expect an increase to 2.2% from 2.1% in May.  The ‘core’ measure is also likely to have risen further to 2.1%. Recent easing of restrictions may lead to a surprise with the inflation number being closely watched by the markets and central bank.

Italy come from a goal down to beat England on penalties in the European football championship.

In the Eurozone, there is a quiet week for data.  From the regional data we have already seen, it suggests we will see a decline in industrial production in May. There have been supply chain issues which have cased problems for the German car industry which will feed into these figures.  The services PMI for June was revised up to 58.3, suggesting growth is continuing to pick up.  The European Central Bank confirmed a move to symmetrical inflation target around 2%, which allows for overshoot’s in the rate over short period, where the rate can average out in the longer term.

A month ago, the Federal Reserve’s monetary policy update raised fears of inflationary pressures and an earlier than expected tightening in monetary policy. Since then, US longer-term Treasury yields have dropped sharply, with 10-year yields touching their lowest level since mid-February. This suggests that markets are reducing their expectations of rate hikes in the medium term. This week, we will see the June CPI report, which may show a fall in annual headline inflation. So far this year, annual inflation has risen from 1.4% in January to 5.0% in May. Whilst we may see a small fall in inflation, it is unlikely to be clear that inflation pressures are easing.

Federal Reserve Chair Powell will provide a semi-annual testimony on monetary policy to Congressional Committees on Wednesday and Thursday.  This may well provide more information on the Fed’s policy intentions and when ‘tapering ‘ of asset purchases may start. Powell’s remarks are likely to be similar to his comments at the Fed’s June policy meeting. The inflation rise will still be seen as ‘transitory’ but with upside risks that need a close eye. He will probably say that the Fed is still someway from its goals and that the very accommodative stance will be eased very gradually.

It is a busy week for US data which may give indications on on growth trends. June retail sales are expected to post a second consecutive monthly decline. However, the fall is forecast to be concentrated in car sales, which seem to be struggling for stock availability issues due to supply chain problems. Industrial production is expected to post another significant rise in June despite the supply chain issues. We will also see the Empire State and Philadelphia surveys, and retail sales.