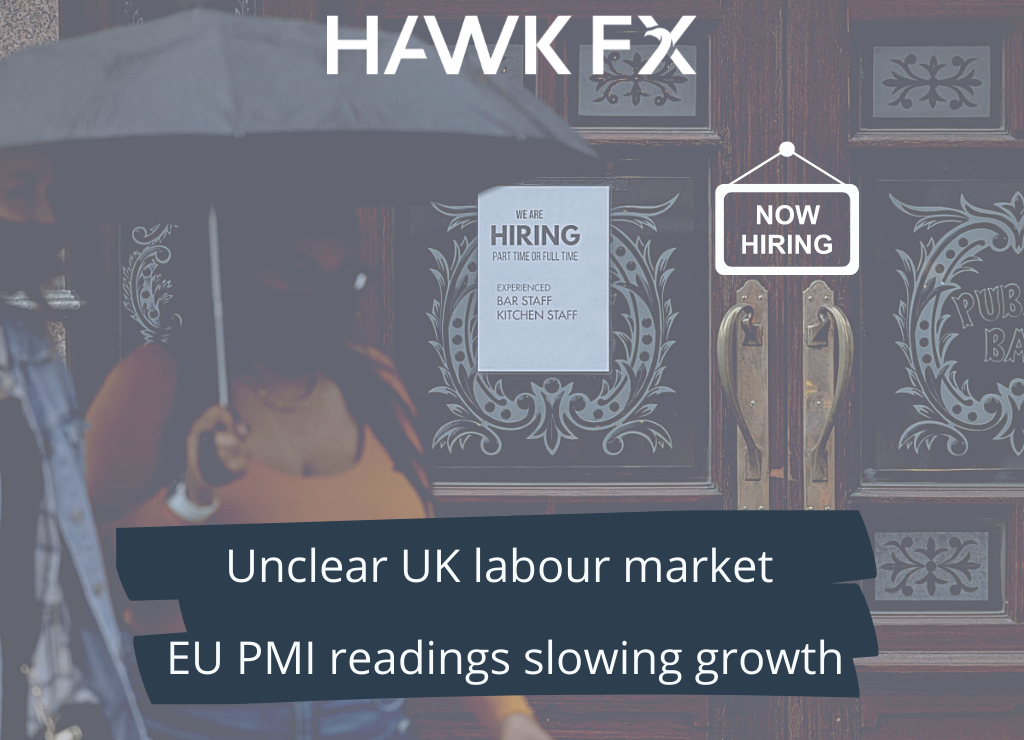 From recent data, the UK economy seems to have grown more slowly in the third quarter than previously expected. In August, GDP increased by 0.4%, which was better than the fall of 0.1% in July.  This was expected, being the first full month without Covid restrictions in England. Growth for the third quarter overall will be around 1.5% which is below the Bank of England’s recent forecast of 2.1%.  Markets are now pricing in a 15bps rate hike by the end of the year, with a further 0.25% hike to 0.5% in February 2022.

Last week, unemployment fell to 4.5% and unfilled vacancies reached a new record of nearly 1.2 million in September. The key unknown is whether furloughed workers at the end of the scheme will return to their jobs or will re-enter the labour market and alleviate supply and wage pressures. The ‘flash’ PMIs this week will provide an indication of activity and price pressures at the start of this quarter. Manufacturing PMI is likely to have fallen slightly to 56.6 with services PMI also expected to fall to 54.4.  These surveys will confirm weakening momentum in economic growth, though they are still consistent with growth.

Inflation concerns may be eased this week with expectations for a small drop to 3.0% from 3.2%.  Some of this is due to timing of support measures a year ago, with the expectation that we could be up to 4% by the end of the year. The increase in the energy price cap will move inflation higher in October, with a further rise in April due to the soaring wholesale gas prices. That means that inflation concerns will remain with inflation above 4% into the second quarter of next year. This puts the MPC in a difficult position between supporting the economy and tackling inflation, with markets expecting increases in interest rates this year.

Within the Eurozone, the main data for the week will be the PMI readings.  Along with the UK, a general softening in growth is expected, with manufacturing PMI forecast to move down to 57.2 from 58.6 and for services PMI to drop to 55.1 from 56.2. Even with falls of this size, the numbers remain firmly in growth territory, above 50, but it is clear that supply issues are having an impact on the pace of growth. The German manufacturing PMI may show a particular drop after the latest industrial production figures showed a fall in output due to shortages of intermediate goods, including semiconductors.

Overall, the IMF revised down its global growth forecast to 5.9% from 6.0%, and left 2022 growth unchanged at 4.9%.  With increased issues with supply chains, these numbers could be adjusted further, whilst increasing inflation is likely to complete central banks into action.  Eurozone final inflation figures will provide a further update.

Prospects of slower global economic growth and more persistent high inflation concerns remain at the forefront of investors’ minds. US Treasury yields fell even though there were further gains in the oil price, a higher inflation figure and Fed minutes reaffirming the likely start of asset purchase tapering this year.  Inflation increased to 5.4% last month with retail sales also rising by 0.7% for September.

This week, we will see industrial production, housing starts, the Philadelphia Fed survey and the Markit flash PMIs. The Fed Beige Book survey will also be of interest with a summary of economic conditions based on anecdotal information. In particular, makes will be interested in what report says about labour market and broader supply conditions. There are also several Fed speakers ahead of the Purdah (quiet period) before the early November FOMC meeting.