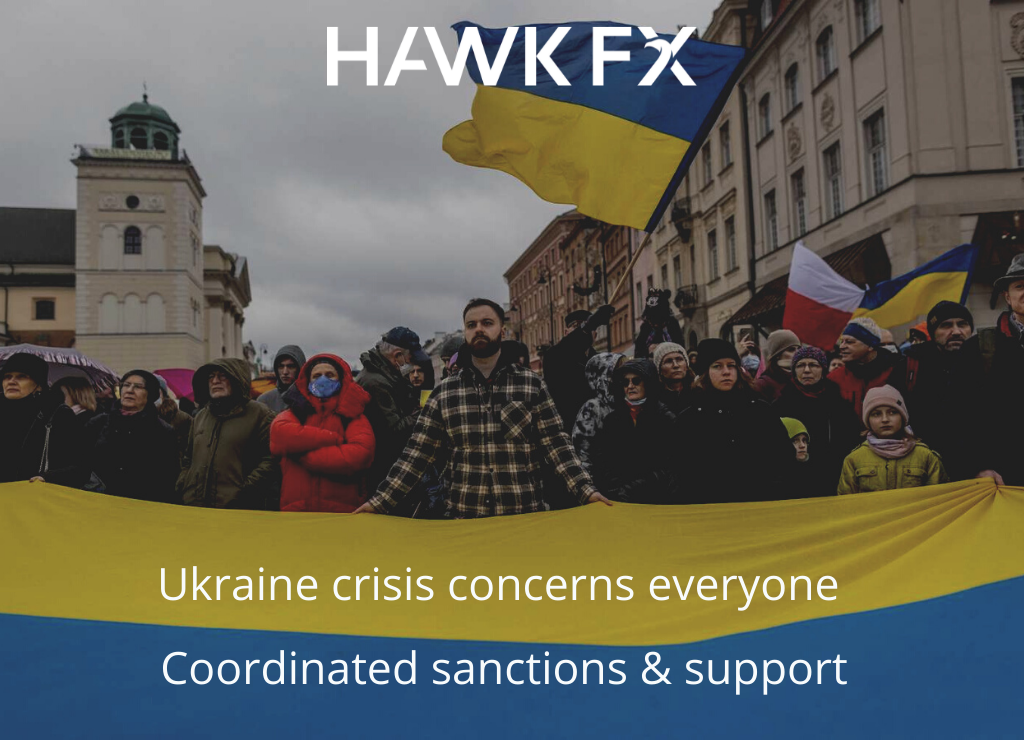 The Russian invasion of Ukraine has been a key focus for markets. A Russian incursion was expected in the breakaway Ukrainian provinces.  Very few people anticipated such a large invasion, which led to market turmoil, with shares falling and oil and gas prices rising.  With ongoing war in Ukraine and sanctions being ramped up, investors have looked for safe havens.  The US dollar has been a key beneficiary, with Sterling losing ground as concerns of knock on impacts of energy prices and inflation, along with the effects of sanctions concern markets.

Sanctions include penalties on Russian banks and high wealth individuals, moves against airlines, and restrictions on exports to Russia of hi-tech and military equipment. Key Russian financial institutions have also now been excluded from the Swift financial service.  There have been reports of the potential for a run on Russian banks as the Rouble dropped to record low levels, with the Russian central bank raising interest rates to 20% from 9%, to try to stabilise the situation.

Bank in UK markets, the rise in gas and oil prices and potential disruption of Ukrainian food exports is likely to push inflation even higher.  This would potentially increase the case for further rate hikes.  However, the Bank of England will be equally concerned by the potential impact on economic growth and wider disruption.  U data including PMIs were generally positive last week, ahead of the invasion, though consumer confidence was lower at -26 and will not be helped by the current situation.  That may be enough to persuade the Bank of England against a further hike at their March meeting.

The crisis in Ukraine seems to have galvanised the European response.  Whilst the initial feeling was that it would be difficult to agree a common position, the ultimate response has been strong and coordinated.  The first package of sanctions was relatively soft, though the German Chancellor Scholz was lauded for putting a stop on the Nord Stream 2 pipeline.  Following the invasion, significant extra sanctions have been put in place, with some Russian institutions excluded from SWIFT.  The response has also included excluding Russian aircraft from European airspace and providing weapons to Ukraine to assist with their defence efforts.

Whilst the response to Ukraine has been strong, there will no doubt be costs across Europe, with higher gas prices, and inflation expected to hit a new Euro high of 5.6%.  One ECB official has said that the Ukrainian situation may delay exit from central bank stimulus. For the moment, the economies of Europe are steady, with PMI readings showing a positive start to the year.  Clear challenges lie ahead, with the situation in Ukraine set to take a huge toll, with significant numbers fleeing Ukraine and many making their way to Europe through Poland.  The Euro has also struggled given concerns over the knock-on impacts from the Ukraine crisis.

USD – Support for Ukraine through Sanctions

The US has been a major part of the coordinated support for Ukraine and the sanctions on Russia.  The rise in gas and oil prices is expected to push inflation even higher, having hit 6.1% in January.  This week, Fed Chair Powell will testify to Congressional Committees. This will be his last opportunity to send a signal on the Fed’s policy intentions before the silent period ahead of the 15-16 March policy meeting. As Powell seems to prefer not to surprise markets, he will probably give some updated guidance.  This may shift to the Fed holding off in these uncertain times.  In the meantime, the US dollar has benefitted from being a safe haven currency.

The monthly labour market report will be seen as an important bellwether of economic conditions. January employment was better than expected. With the impact of Omicron fading, we expect another strong employment rise of 500k for February.  The unemployment rate may fall to a new low of 3.8%. Annual earnings growth will also be closely watched and may be as high as 5.9%.  That would make the Fed take notice that inflation risks are spreading beyond energy and supply chain bottlenecks.