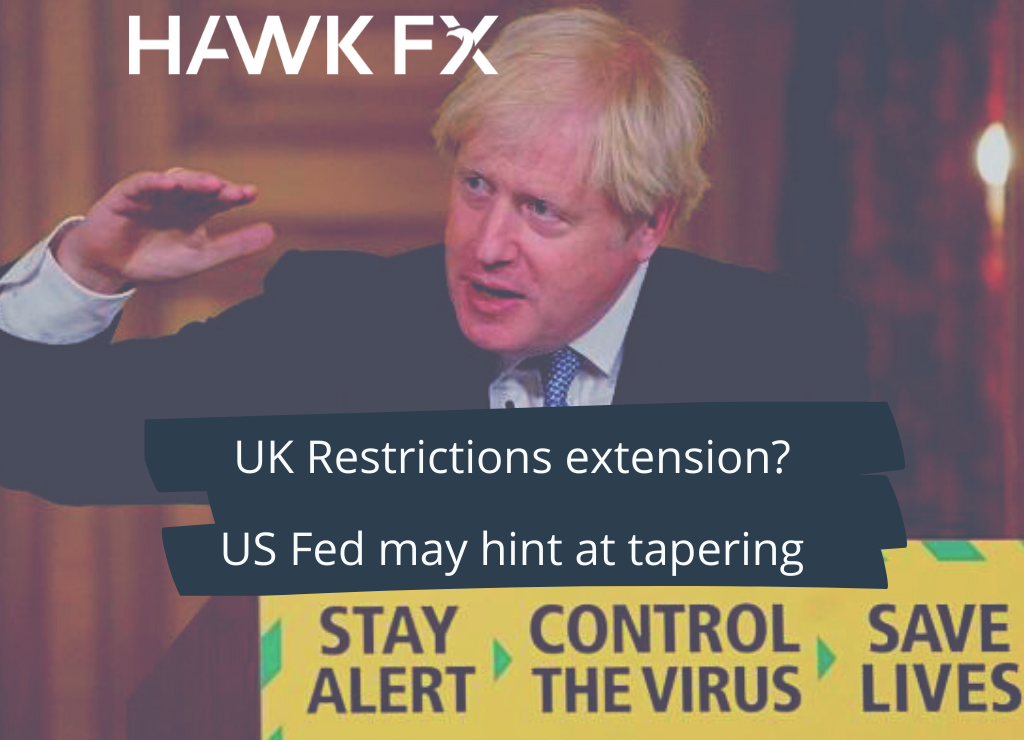 The government is due to confirm the next step in easing Covid restrictions for England.  The final easing of restrictions was due to go ahead on 21st June. With the acceleration in new Covid delta cases, it is likely the next easing will be delayed, perhaps by a month initially. The vaccine rollout seems to be helping to reduce more serious cases and hospitalisations, though the government will likely feel that retaining some or even all of the remaining restrictions will be necessary.

Inflation has been rising in the UK, though at a slower rate than in the US. May CPI inflation is expected to increase to 1.8% from 1.5% in April.  This will still be slightly below the 2% target.  The labour market is a major unknown in terms of inflation.  With the extension of the furlough scheme and the strength of the economic rebound, a sharp rise in unemployment is not expected.  The latest labour market report is likely to show a rise in employment of 120k.  We also expect to see unemployment fall to 4.6% from 4.8% and earnings growth to increase to 4.8% from 4.0%.

The stronger rebound and labour market may lead to further increases in inflation, which would need to be taken into account by the Bank of England. GDP rose by 2.3% in April due to a 3.4% increase in services output.  The Bank of England’s Andy Haldane warned that a tightening in monetary policy may need to be imminent if a more persistent rise in inflation is to be avoided. He will soon leave the Bank and is more ‘hawkish’ than most fellow policymakers.

The European Central Bank left policy unchanged last week as widely expected.  The ECB chose not to signal when it might start reducing its pandemic stimulus program.  It expects inflation to remain below its target in the foreseeable future.  Recent data has shown an overshoot in inflation but the ECB expects the pick up in prices to only be temporary.  Annual inflation is now forecast to reach 1.9% this year and 1.5% in 2022.  The Central Bank presented an update to the economic outlook in the eurozone. The new forecasts suggest a GDP growth rate of 4.6% for 2021 and 4.7% for 2022 — both of which have been revised upward.

USD – Fed may hint at tapering

This week, the Federal Reserve have their latest policy meeting, with no change highly likely on Wednesday.  The Fed may, however, make an adjustment to its policy guidance. The emphasis through the pandemic has been on supportive monetary policy. Some Fed policymakers are now suggesting that discussions around the tapering of asset purchases should start soon, given the strength of the economic recovery. The post-meeting press conference may include comments around the future path of tapering, which is likely to be very gradual.

Fed policymakers will also update their economic forecasts.  In March there was a significant upgrade in growth projections and a reduction in unemployment rate forecasts. The new forecasts are likely to show further improvements in the outlook.  It will be important to see what happens to the inflation and interest rate projections. Previously inflation was expected to be close to 2.0% even in 2023.  This time, the inflation forecast is likely to be revised up, though they may still forecast inflation close to 2% over the longer term. This may bring forward expectations around interest rate rises from the previous forecasts of 2024.