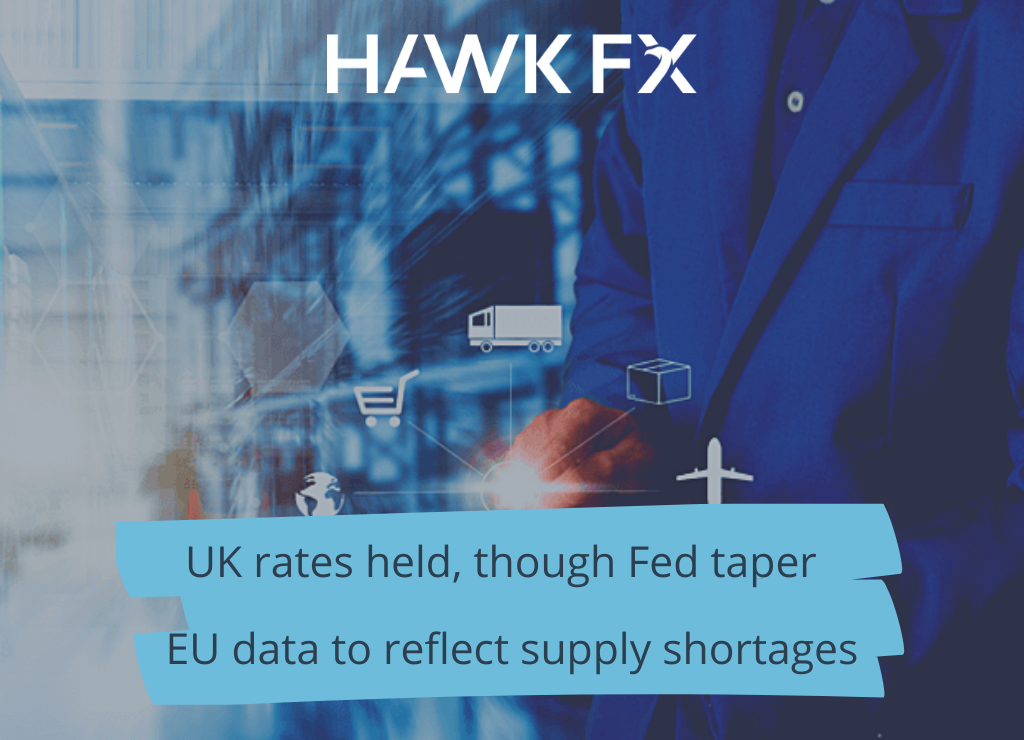 The Bank of England didn’t change UK rates last week, surprising the markets. They did signal an increase “over the coming months”.  There was a 7-2 majority to keep rates on hold. Ramsden and Saunders did vote for a 15bp increase to 0.25%. Most rate-setters, however, felt that they should wait for further developments in the labour market data following the end of the furlough scheme.  Inflation is set to increase significantly, up to 5% next year and these expectations will likely force the BoE into raising UK rates.

The Bank of England suggested that interest rate rises at around 1% by the end of 2022 would likely result in inflation undershooting the 2% target at the end of the forecast period.  This could be the cases, particularly if energy prices fall back significantly after the next six months. This suggests the Bank are only expecting modest interest increases in the coming year.

This week, we will see monthly GDP for September and the overall figure for the third quarter.  Monthly GDP is likely to be around 0.6% growth which would mean overall third quarter growth of around 1.5%.  This is a marked slowdown from 5.5% in the second quarter and reflects the change from the boost the economy saw immediately after reopening.  Expectations are for a lower level of growth in the final quarter of around 1%.  Supply bottleneck are hampering businesses and adding to the slowdown.

This week, markets will be interested in the German ZEW survey and Eurozone industrial production. The ZEW is a survey of the views on economic prospects from financial professionals rather than businesses, but it provides a good early guide to business surveys. Markets expect in modest falls in both the current situation and expectations components for November.  This will bolster expectations that the ECB are not anticipating increases in interest rates anytime soon. We forecast a fall in Eurozone industrial production in September.  This has been impacted by Germany where shortages of intermediate goods appear to be having a significant impact on production.

The US Federal Reserve’s policy update confirmed that it will start to taper its asset purchases. The initial monthly reduction is $15bn from the current rate of $120bn purchases per month. With similar-sized cuts going forward, the Fed would complete the tapering process in the middle of next year. The Fed seems to be in no great hurry to start lifting interest rates.

That Fed view of transitory inflation could be tested next week, with the release of October CPI inflation. We expect an increase to 5.7%, which would be a three-decade high.  Inflation rates look set to stay elevated in the coming months but are expected to fall back during next year. Rising inflation has affected US consumer sentiment in recent months.

The US added 531,000 jobs in October, which was higher than expected.  The two previous reports were also revised up significantly. This likely reflects the decline in Covid cases. The unemployment rate also fell to 4.6% from 4.8%, which is a new low since the start of the pandemic.  Average earnings growth accelerated to 4.9%. The labour force participation rate is still below pre-Covid levels, which suggests that there may be more slack in the labour market than these indicators suggest.