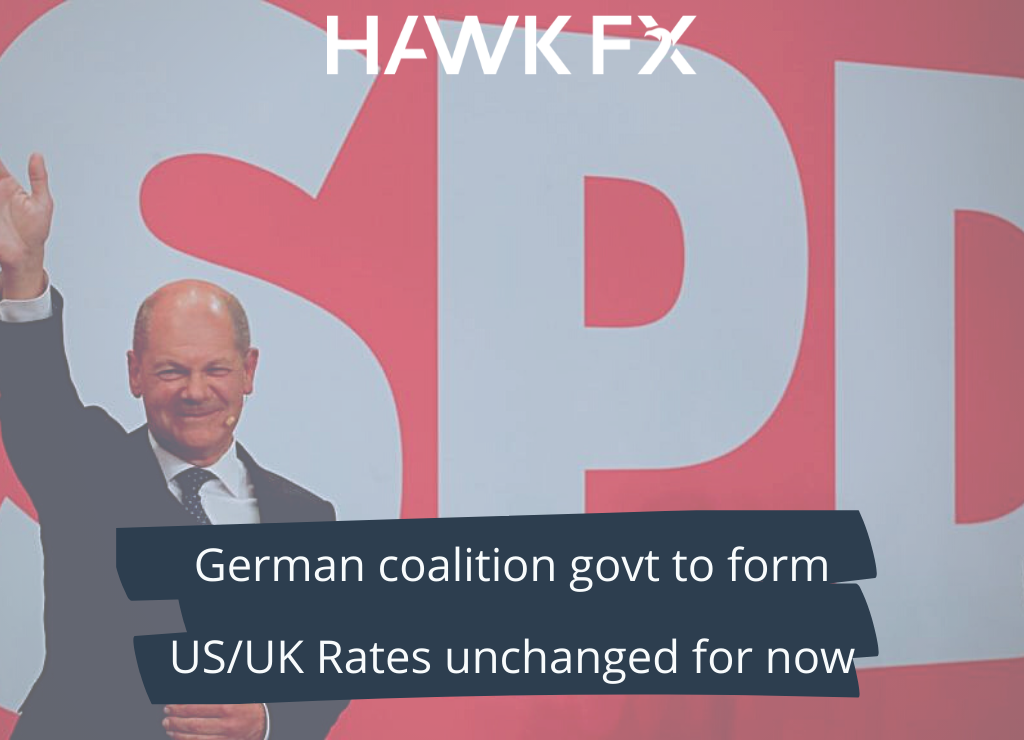 Last week, the Bank of England left policy unchanged.  The Base Rate remains at 0.1%, but an additional MPC member unexpectedly joined Saunders in voting for an early end to QE. While the majority still favour completing the current £895bn bond-buying programme, Ramsden’s switch to ending early is a signal of a move in policy. The Bank of England now expect inflation to peak above 4% and they suggested the sharp rise in wholesale gas prices may keep inflation above 4% into the middle of next year.  Expectations moved forward somewhat to expect a rate hike in early 2022 with a further potential hike in the middle of the year.

A chorus of central bank speakers this week will expand on recent policy decisions.  BoE Governor Bailey speaks at an event today, while new MPC member Catherine Mann speaks on a panel tomorrow. Central bankers from the US, Eurozone, Japanese and UK will also talk on Wednesday at an ECB event. These will be interesting talks as policymakers contend with slowing growth and inflation potentially remaining higher for longer.

Last week’s PMIs pointed to further easing in the pace of expansion in September.  With gas prices remaining elevated and potential for further disruptions from the panic buying of fuel, we could see further disruptions hitting growth over the coming months. This week we will see the BoE credit data and the Q2 GDP, current account and Final manufacturing PMI.

The Eurozone joined the high-inflation club last month, with headline CPI moving up to a 10-year high of 3%. It is expected to rise further in the coming months.  The forecast for September is an increase to 3.3%, which would suggest that short term inflation will be higher than the ECB predicted recently. Its view remains that this year’s high inflation rates are transitory and medium-term inflation will undershoot the 2% target. It may, however, take longer for inflation to return to 2% than mid-2022.

There will focus this week after German federal elections. It was a close contest with the left-of-centre SPD getting the largest share of the vote. Outgoing Chancellor Merkel’s CDU/CSU was in the end only 10 seats behind the SPD. There will likely be weeks of negotiations to form a coalition government now. A key focus will be whether the next German government will be led by the SPD’s Scholz or the CDU/CSU’s Laschet, and that could have implications for fiscal policy as well as the country’s EU and foreign policy.

Norway’s central bank raised interest rates by 25bps to 0.25% last week. ECB President Lagarde appears in the European Parliament. The view remains that price pressures will ease back next year as economies adjust to current supply-side issues such as raw material and staff shortages. This week, we will see Eurozone economic sentiment, unemployment and final manufacturing PMI along with flash CPI.

Concerns about China’s property sector and the potential ramifications for rest of the world worried investors last week.  These were soothed by liquidity injections by China’s central bank. Meanwhile, the world’s major central banks are grappling with the simultaneous slowdown in economic growth and the risk that high inflation may persist for longer than expected. Last week’s OECD forecast updates, saw downgrades to growth expectations but upgrades to inflation predictions. The US Federal Reserve announced that a tapering of its $120bn monthly asset purchases “may soon be warranted”, and is likely to start before the year-end. Fed policymakers are split between whether interest rates will start to rise in 2022 or 2023.

There will be a focus on the Fed’s preferred inflation gauge, the PCE deflator this week. The CPI print suggested that some factors that have driven inflation higher this year, such as used car prices, may have started to ease back. Annual inflation rates are likely to stay elevated for some time. We expect the PCE deflator to remain at 4.2%. The ISM manufacturing survey will also be perused closely for early indications of the pace of growth in the sector and whether the index for business prices, while still very high by historical standards, will continue to edge lower.

The outlook for US consumer spending remains closely watched and debated. Personal spending figures have held up better than the more narrow focused retail sales figures.  This suggests that consumers are moving spending from goods to  services. For August, it is expected to be up close to 1% on the month. There will be an update of the Conference Board consumer confidence measure. For a broader assessment of current US activity, markets will also take note of other monthly data releases, including durable goods orders, the goods trade balance and construction spending.

Fed Chair Powell and US Treasury Secretary Yellen will also testify to the Senate and House, as lawmakers work to reach a deal to extend government funding and avoid a shutdown.