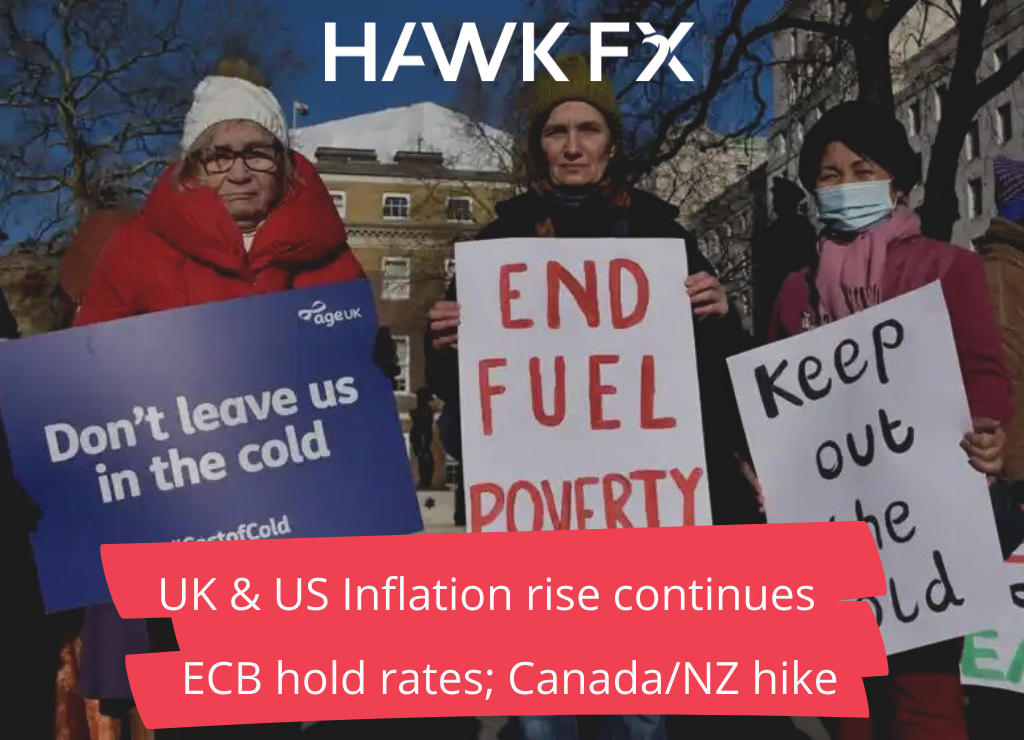 Last week, we saw a further sharp rise in inflation to 7% in March.  Both headline and core inflation were higher than expected, with the potential for headline inflation to get close to 9% in April. Meanwhile, unemployment fell to 3.8% with wage growth accelerating, which suggests a widening of inflation pressures. Bank of England policymakers have been less vocal than some other central banks, with the comments suggesting concerns over risks to growth. The market does still expect further rate hikes given the ongoing rise in inflation which will make it difficult for the central bank not to raise rates again in May.

There is not much data due out in this shorter Easter week.  We will see the April readings for the manufacturing and services PMIs. Last month saw a big jump in the services measure following a rebound post-Omicron in consumer-facing services.  The manufacturing index, however, fell to its lowest since last February. We will be watching this month for evidence of the impact of the Ukrainian crisis.  There may well be signs of further inflationary pressures and supply-side constraints as a result of the conflict.  Markets are forecasting both measures to be down in April, though they will remain in growth territory.

Following a rise in GDP of 0.1% in February, March retail sales will provide further insight on whether consumer spending is slowing. A further decline would be the third drop in four months. This may be a result of consumers switching to services as Covid restrictions end. However, it may be a sign of changes as a result of increasing costs being borne by consumers. The April GfK consumer confidence will also likely show a fall, again as the cost of living takes confidence back to the levels of late 2020.

EUR – ECB hold policy in contrast to Canada and NZ

April manufacturing and services PMIs will also be out for the Eurozone. These will be closely watched by markets for indications of inflationary pressure, supply bottlenecks and demand issues. Last month, we saw the Eurozone manufacturing PMI measure drop though the services index rose slightly.  As the Eurozone has closer economic ties to Russia and Ukraine it is likely to be more impacted by the crisis with falls in the PMIs expected.  The euro has generally been weak as a result of the concerns over these impacts.

The Canadian and New Zealand central banks both raised interest rates last week by 50 basis points.  This was a larger move than their previous 25 basis point hikes. This follows a number of central banks with the feeling they need to move more aggressively to control inflationary pressures. By contrast, the European Central Bank did not change monetary policy.  Markets expect that the ECB will start raising interest rates sometime in the second half of this year, though this is not something the ECB is clearly signposting.

The US also saw another sharp rise in inflation to 8.5%, though the core rate only rose slightly to 6.5%. The smaller rise in core inflation was mainly due to a fall in car prices. The Federal Reserve will no doubt be concerned about the larger-than-expected rise in service prices.  This suggests that inflationary pressures are widening out, which is backed up by increasing wage pressures.

The Federal Reserve is also concerned about inflationary pressures, which suggests we will see a significant tightening in monetary policy. Several Fed policymakers have signalled the possibility of a 50bp rate increase at the next policy update on the 4th of May. After this week, the Fed goes into its pre-meeting purdah, ‘blackout’ phase, so unless we see anything this week, markets will expect a 50 basis point hike in May.

We also see the PMI data in the US, where both the manufacturing and services indices were up in March.  Both remain at elevated levels consistent with strong economic growth. We expect a fall in both manufacturing and services.  Recent falls in consumer confidence are a signal of a potential fall in household spending. Housing data will also give us some indication of whether higher interest rates are starting to have an impact on the market.