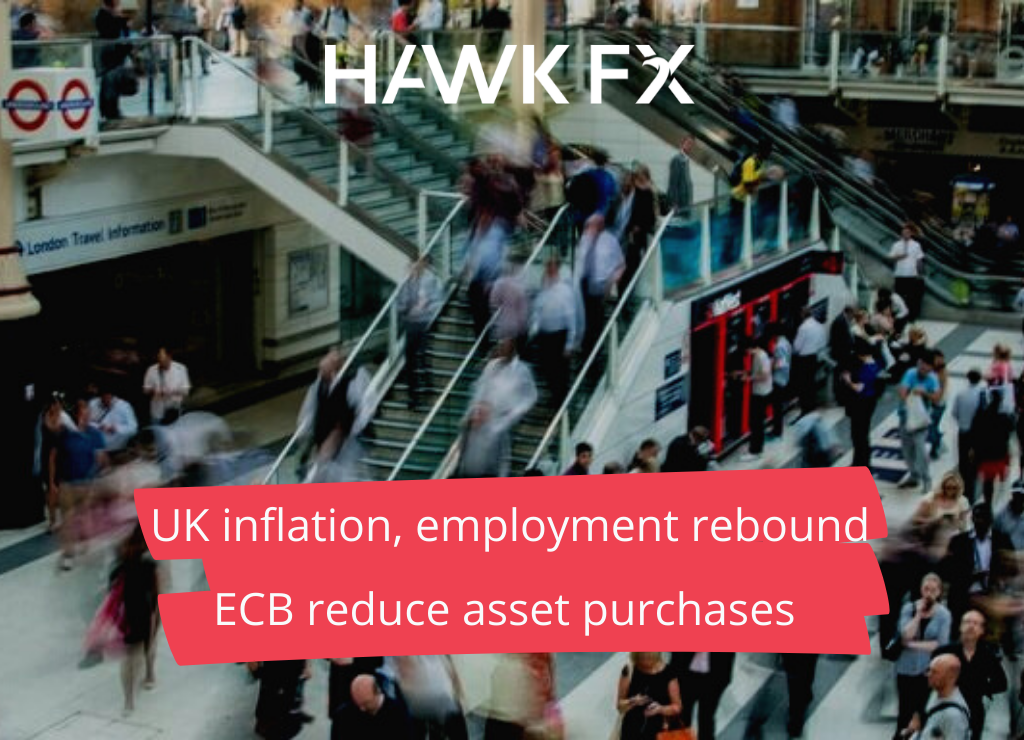 The GDP data last week showed that the economy grew by 0.1% in July.  This is much lower than the 1% rise in June, and lower than markets expected. Following the very strong growth rate in the second quarter as the economy reopened, a slowdown was expected in the third quarter.  This July figure suggests that the Bank of England’s latest projection for a rise of 2.9% in the third quarter looks optimistic.

Despite the lower GDP growth reading, sterling remained on the front foot, gaining against the US dollar and euro.  Whilst the general optimism remains for trading prospects, supply constraints look likely to affect growth including in the availability of materials and labour.  We expect the fall to 2% in inflation in July to be reversed in August with an inflation rebound higher to 3%.

The labour market report this week is likely to show strong ongoing demand for labour, with a record high of vacancies over a million in July.  Unemployment is expected to fall further from 4.7% to 4.6%.  As the furlough scheme ends it is likely that these furloughed workers will come back into the labour market and won’t lead unemployment higher.  Annual earnings growth will remain elevated but lower than the previous 8% reading.  Retail sales is likely to erase some of the fall of 2.5% in July.

Last week at the latest European Central Bank meeting, policymakers decided to reduce bond purchases ‘moderately’ in the remainder of the year.  This means that the monthly pace will be lower than the €80bn average since April. President Lagarde reaffirmed the risks to the economic outlook remained ‘broadly balanced’. The ECB did upgrade growth and inflation forecasts.

The delta Covid variant was cited as a potential delay to reopening which will slow the recovery in global trade. Vaccination rates are lower in many of the emerging market economies that are important in the global supply chain. Shortages in materials and equipment are holding back manufacturing and increasing prices. These effects are still expected to be temporary.

The focus in the US remains whether the Federal Reserve will start scaling back its $120bn a month of asset purchases.  Some expect this to be announce at the next FOMC meeting on 21st/22nd September. Inflation has been higher in the US that Europe, reaching 5.4% in July. We expect CPI inflation to remain at a similar level in August. There are some areas where price pressures appear to be easing but cost pressures related to supply bottlenecks remain higher.

There are concerns that US consumer spending growth may be slowing more than expected. The University of Michigan’s consumer sentiment index fell to a decade low of 70.3 in August.  The fall was mostly attributed to concerns about inflation impacts and rising Covid delta cases. The markets expect a  bounce in the September reading of consumer sentiment to 73.5. August retail sales may also fall for a second month.

On a more positive note, last week’s initial jobless claims fell to 310,000.  This is the lowest level since the start of the pandemic.  This variation in the data may keep the Fed holding off on action, whilst this will raise hopes that the delta cases have not affected strong demand in the labour market.