Market Report – UK Inflation and Cost of living squeeze; ECB minutes to pave the way for hikes?; US Inflation falls, but Fed to continue hikes 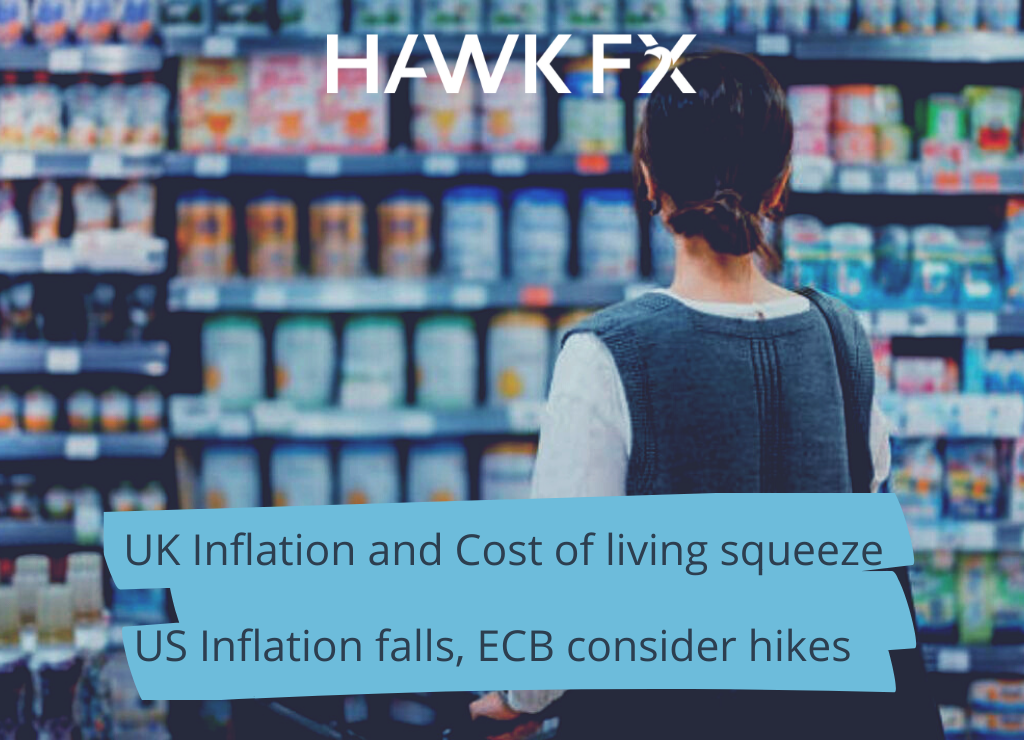 This week, the inflation report for April will show a large rise to 9% as the energy cap moves higher.  In March, we saw inflation rise to 7% with higher food prices and energy contributing to driving a higher rise.  Inflation is rising outside of these areas, with ‘core’ inflation excluding food and energy prices expected to increase to 6.3% from 5.7%. The Bank of England forecast an increase above 9% recently and they will be interested in whether inflationary pressures are broadening out.  Inflation may move higher again in the autumn after the next energy cap rise.

The Bank of England expects inflation to fall sharply next year and emphasised its growing concerns about the downside risks for UK economic growth. We will hear more about the challenges of inflation versus growth from Bank of England Governor Bailey at the House of Commons Committee. The question for markets at the moment is whether another rate hike is likely in June.

The latest labour market report may show a fall in employment with unemployment expected to hold at 3.8%. However, with unfilled job vacancies close to record highs, the market is clearly still very tight. That suggests that we will see ongoing inflation pressure from wage growth.  Labour market pressures will ease if economic activity softens, which is what the Bank of England remains concerned about.  In the first quarter, GDP was 0.8% but this post-Covid bounce seems to be waning.  The May GfK consumer confidence measure is likely to fall further, suggesting the cost of living is affecting consumers and slowing the economy.  Retail sales may show a bounce, but this follows a large drop in March.

EUR – ECB minutes to pave the way for hikes?

The European Central Bank policymakers have been expressing concerns over the level of inflation.  This suggests they are moving towards an early interest rate hike despite concerns about economic growth. Last week,  President Lagarde suggested that a rate rise might immediately follow the end of the asset purchase programme, which could be in July. There seems to be a feeling across the committee that some further action is required sooner rather than later.  The ECB’s June policy meeting will be closely watched for signs that a rate increase will be on the way on 21st July. This week, we will see the minutes of the ECB’s May policy meeting, which may give further insight into their plans and expectations.

In April, inflation in the US slowed to 8.3% from 8.5% in March.  This was less than expected, with core inflation falling a similar amount, to 6.2% from 6.5%. Federal Reserve policymakers have been much more explicit about their interest rate intentions suggesting 0.5% hikes will come in June and July. The Fed still seems to be more concerned with upward inflation than downward growth risks. The Fed looks concerned by evidence that inflation is continuing to broaden out.

Growth appears to be strong in the US despite the cost of living squeeze.  Retail sales and industrial production data for April are expected to show that the growth picture still looks reasonable.  Housing starts and sales will probably show a negative impact from rising interest rates.  We have also seen a significant fall in equities over the last week, with the US indices falling close to 20%, which is often seen as an indication of a ‘bear market’. Despite this, the US dollar has hit new one year highs against the pound and euro.