Market Report – UK Inflation above 10% and going higher; ECB minutes could give clues on the next hike; US Jackson Hole Symposium speech likely to focus on inflation 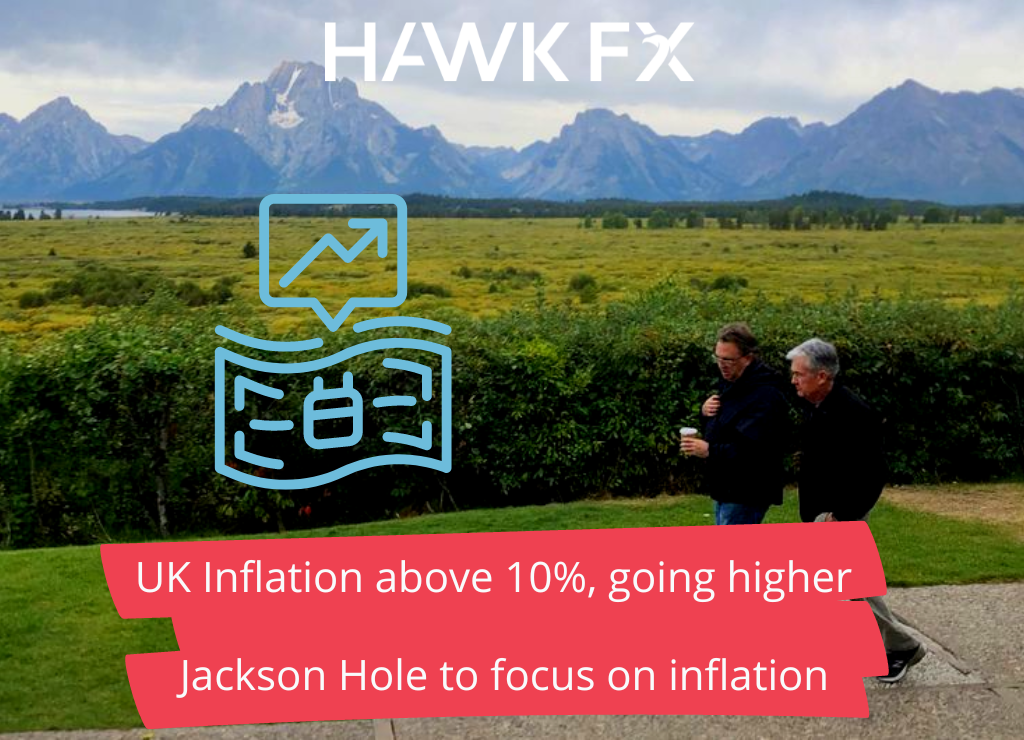 The latest inflation reading last week was a reminder that price pressures are the key economic issue. Inflation rose by more than expected, with UK Inflation above 10% for the first time in 40 years.  We are likely to see an even larger rise in October when the energy price cap rises. Core inflation (6.2%) may be of more concern to the Bank of England as it suggests that inflationary pressures are becoming broader based.  This is also in contrast to the US, where July inflation edged lower and energy prices are unlikely to provide further pressure.

As a result of the inflation move, market expectations for UK interest rates moved higher, with a further 1.75% of hikes expected in the next year. This also meant UK 10-year gilt yields touched their highest level in almost two months. Further ‘hawkish’ comments from US Federal Reserve officials and the uncertain environment helped to push the US dollar to its highest level in more than a month against sterling.

This week, the key data are the PMI indicators and the CBI surveys. It seems that demand is faltering suggesting that the downturn may gather pace. Despite this, recent data suggests that cost pressures are moderating as supply constraints ease.  The retail CBI measure may provide some indication of whether sales have fallen again after a rise in July.

EUR – ECB minutes could give clues on the next hike

This week, the minutes of the ECB’s July policy meeting will be released.  At this meeting, interest rates were raised more than expected, by 50 basis points.  Any clues from the minutes will be taken on the size of the expected second hike early next month.  The ECB faces a similar dilemma to other central banks with inflation suggesting aggressive action is required.

Recent data highlights that markets are unsure whether rising inflation or faltering growth is the bigger risk. Most central banks remain focused on inflation with both New Zealand and Norwegian central banks raising rates by a further 50 basis points. The European Central Bank, along with the Bank of England and the US Fed is expected to hike again in September. Meanwhile, markets look for clues about when central banks will think they have done enough and will start to move away from hiking policy rates. With further uncertainty, the Euro also fell back to parity against the US dollar.

This week, the US Fed will hold its annual economic symposium at Jackson Hole. The Fed Chair’s opening remarks have previously provided an important update on policy. Last year, Fed Chair Powell said inflationary pressures were temporary before the central bank started hiking based on less transitory numbers.  This time markets will be looking for signals on the size of the policy move in September.  Any indications or evidence that the Fed think inflation has peaked will give an indication of what we will see before the Fed ends monetary tightening. Markets expect a hawkish message, wanting a fall in headline inflation as well as an easing labour market.

The second quarter GDP is a second reading that is unlikely to add much new information.  Indicators for July are likely to give mixed messages with further signs the housing market is under pressure due to higher interest rates.  We may start to see industrial activity and consumer spending rise. The Fed’s preferred inflation measure (the personal consumption expenditure deflator) is likely to confirm that inflation fell modestly in July but is still well above the target.