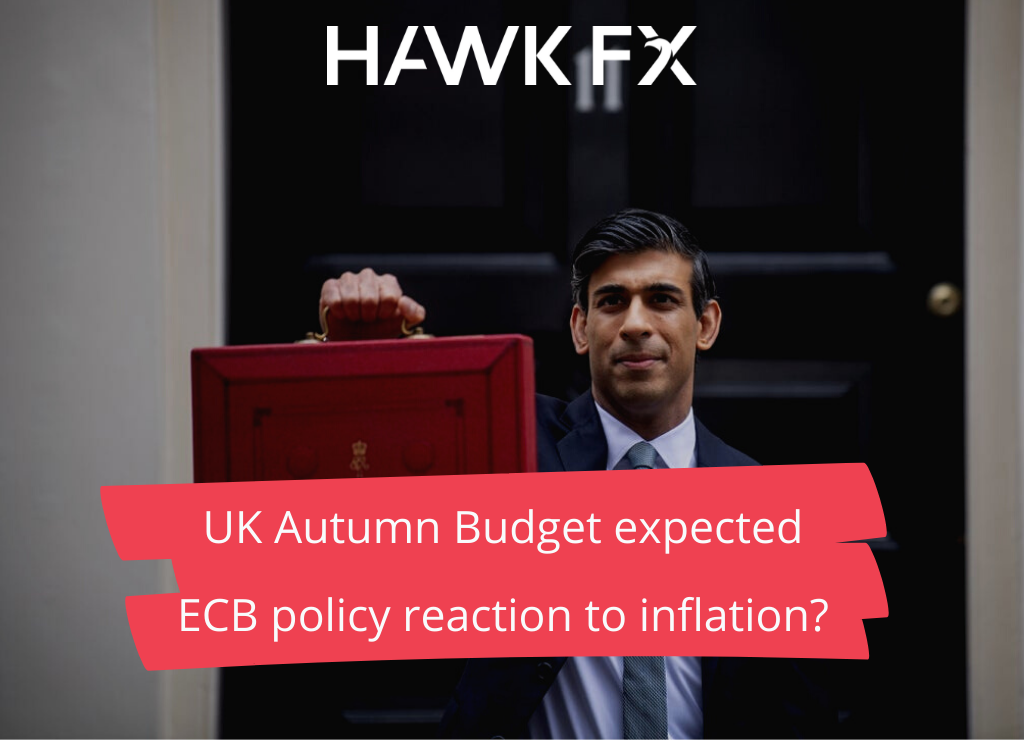 This week, the Autumn Budget and Spending Review will be the main focus.  The Office for Budget Responsibility (OBR) will likely increase it’s growth forecast for the year from 4% to closer to the BoE’s 7.25% forecast. Government borrowing was lower for the first half of 2021. Despite better-than-expected public finances, the Chancellor will probably be cautious, with higher inflation and the potential for interest rates to rise. The Chancellor could announce new fiscal targets to achieve a balanced current budget in order to control government borrowing. There may be some giveaways in the budget with suggestions that the coronavirus loan guarantee scheme may be extended.  There may also be announcements surrounding the transition to net zero energy. The Budget is expected to be broadly fiscally neutral.

Last week, the markets reacted to hawkish comments from Bank of England Governor Bailey.  He said that the Bank “will have to act” to curb inflation. Meanwhile, Chief Economist Pill said that UK inflation could move above 5% in 2022 and that November’s policy decision is “finely balanced”. Markets are now fully pricing in a 15bps rise in base rate to 0.25% in November.  They are now pricing in four further 0.25% hikes next year to 1.25%.

In October, the PMI readings surprisingly rose, suggesting the pace of expansion picked up at the start of the fourth quarter. Consumer confidence fell, however, along with retail sales.  This adds to a mixed picture, further obscured by supply chain disruption. This week, the CBI retail survey and BRC shop price index will add a little more colour.

This week, the European Central Bank provides its latest policy update. There is likely to be some discussion about what will replace the Pandemic Emergency Purchase Programme (PEPP). The markets will be interested to see what President Lagarde says about significantly higher inflation in the short term. Thus far, many ECB officials have sounded relatively relaxed with what they still see as ‘transitory’ inflation compared the the BoE or the Federal Reserve.

The latest Eurozone ‘flash’ CPI inflation figures for October are expected to show an increase to 3.6%.  This is well above the ECB’s new symmetric 2% target, with the increases mainly driven by energy prices. Core inflation, excluding food and energy, is likely to remain unchanged at 1.9%. We will also see the first estimate of Eurozone GDP growth for the third quarter. Markets are forecasting a similar increase to the second quarter of 2.1% growth. The German IFO business survey will give an update on business confidence.

USD – Slowing growth due to shortages

The US economy has already recovered the declines in output due to the pandemic.  Growth appears to be slowing, however, with third quarter GDP growth expected to have slowed to around 3.5% compared with 6.7% in the second quarter. The September personal spending data will also give an idea of how consumption progressed through the quarter. Consumer sentiment has been falling and remains near recent lows, with households facing shortages and higher prices. The Fed’s preferred inflation gauge, the PCE deflator, is likely to have moved higher again in September, to 4.4%, which would be the highest level since 1991.