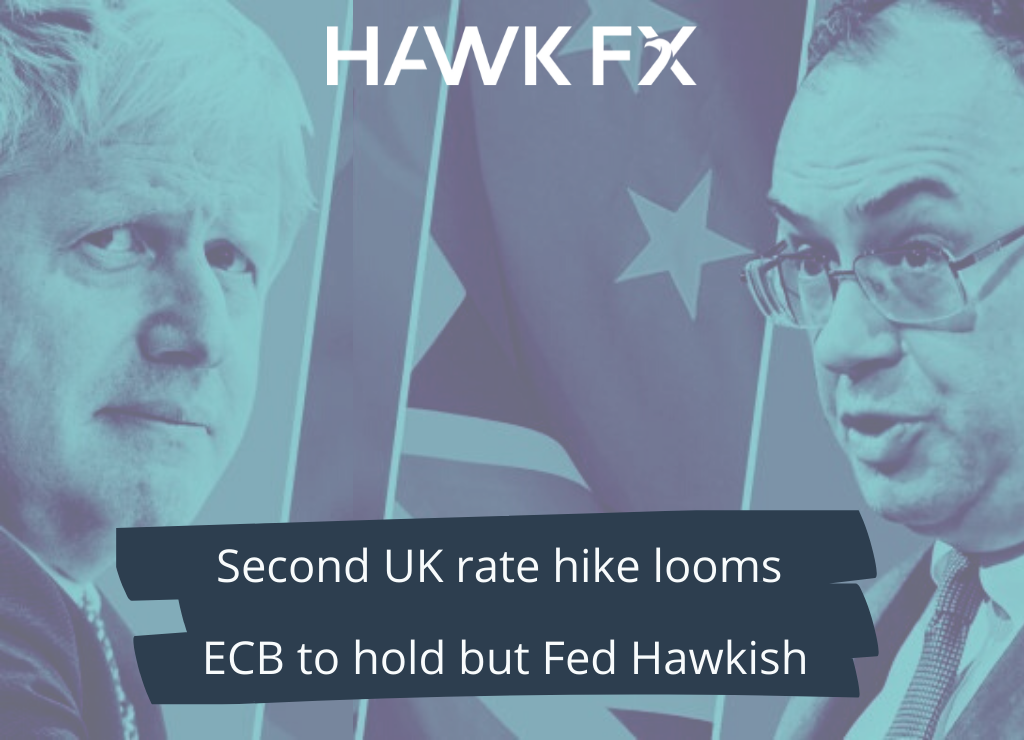 The main focus this week will be the Bank of England’s latest monetary policy decision.  In December, interest rates were hiked by 15bp to 0.25%. Official data has shown UK economic output returning to its pre-pandemic level.  Inflation remains higher than expected, hitting 5.4% in December, whilst unemployment continues to fall to 4.1%. The markets are almost pricing in a further rate hike of 25bp to 0.50%. We may also see the BoE confirm that they will stop reinvesting maturing assets purchased from its QE programme.

The new economic forecasts from the BoE will also need to show a higher peak in inflation than previously predicted. The April energy price cap and supply bottlenecks may push inflation even higher. There are suggestions that Boris Johnson may be scrap the contentious national insurance hike because of the impact of Omicron and higher inflation which are likely to lower growth this year.  Higher interest rate assumptions could also push down medium-term inflation projections, which is likely something the BoE are expecting.

The ongoing ‘partygate‘ situation continues this week with a response from Boris Johnson to Sue Gray’s report expected.  Of more importance is the UN Security Council meeting where Russia will be questioned by the rest of the Council.  Last week, we saw disappointing retail sales data and an 11-month low for UK business growth. The services PMI also fell slightly to 53.3, with manufacturing at 56.9, which both signals a slowdown, albeit still in growth territory.

EUR – ECB to hold rates in contrast to UK/US

In stark contrast to the Bank of England and the Federal Reserve, the the European Central Bank have shown no willingness to raise rates.  They are almost certain to hold interest rates on Thursday. There will be a press conference following the decision.  A key focus at the ECB press conference will be whether President Lagarde will push back on market expectations for a hike later this year.  The ECB has set out plans to taper its asset purchases through this year with the end of the pandemic emergency purchase programme in March.

Eurozone GDP figures for the fourth quarter will show a slowdown because the German economy contracted by 0.7% due to Omicron and supply chain disruptions. We expect Eurozone growth to slow to 0.2%. Eurozone inflation is also expected to fall from 5.0% in December to 4.3% in January.  This is partly due to German VAT changes in 2021, but will reduce the pressure slightly on policymakers.  The rise in oil prices above $90 a barrel may push inflation higher next month.  The euro remains generally weaker with the lack of action expected from the ECB and concerns around Ukraine.

Fourth quarter GDP was stronger than expected, rising by 6.9% compared to 2.3% the prior quarter.  Much of this increase was driven by inventory growth, with a recent run of softer data suggesting a much weaker first quarter.  Omicron has has a significant impact, though infection rates have recently started to fall.  The expectations remain that the Fed will tighten policy in March, especially with inflation showing no signs as yet of peaking. This week, the ISM manufacturing and services reports and the labour market report are unlikely to do enough to stifle these expectations.  The non-farm payrolls are expected to have added around 200,000, in line with the prior reading.

The US Federal Reserve showed an aggressive stance on taming red-hot inflation last week.  Inflation is currently at a 7% which is a 40-year high. Following the Federal Open Market Committee meeting, Chairman Jerome Powell gave a clear signal that interest rates will rise and asset purchases will end in early March ‘assuming that conditions are appropriate for doing so’.  Weekly jobless claims dropped by 30,000 to 260,000, and a report by the Commerce Department cited a robust rebound from 2020 for the US economy which grew 5.7% in 2021.  This is the best performance since 1984, albeit from a low, Covid-induced base.