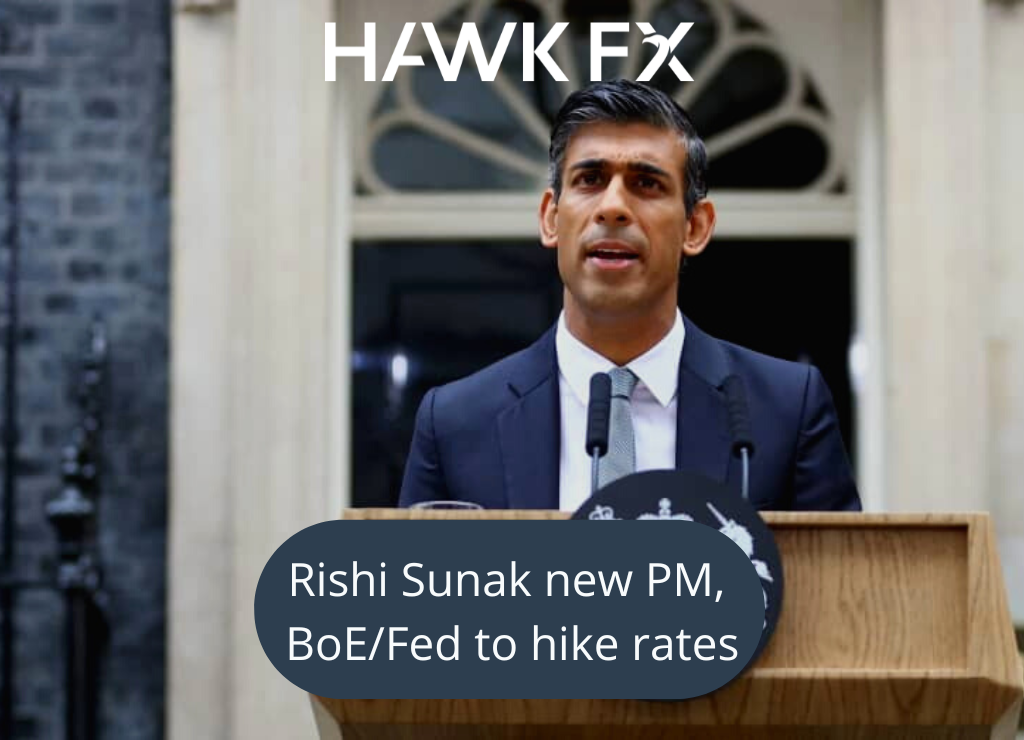 Last week, we had confirmation of Rishi Sunak as the new Prime Minister.  The market has responded positively to the abrupt turnaround in fiscal policy announced by the new Chancellor of the Exchequer Jeremy Hunt.  There was no real market concern with the delay of the fiscal statement until 17th November.  Gilt yields are now around 150bp below their peak following the September mini-Budget.

The Bank of England is expected to hike rates this week.  The size of the hike is uncertain and expectations have been fluctuating sharply. After the mini-budget, the markets were expecting a 1% hike.  Since the Bank of England now doesn’t have a clear idea of the fiscal situation, they are likely to hike rates by 0.5%-0.75%.  The expected peak in interest rates has also been fluctuating.  It was as high as 5.5% after the mini-budget, but has been falling and is currently around 4.75%.  This may change again after the next fiscal statement.

The BoE produce a new set of economic forecasts at this meeting, though they will have caveats due to the missing fiscal information. The Bank of England will be basing its forecasts on the announcements by the Chancellor. Inflation will be expected to end the year above 10% but to fall sharply through next year. The BoE will no doubt stress the highly uncertain situation and risks to growth.  A recent composite PMI at 47.2 highlighted the slowing economy with individual PMIs due out this week.

The European Central Bank’s raised rate by the expected 0.75% again. There was however dovish policy guidance alongside this, suggesting that the pace of hikes will now slow.  The progression of central bank hikes suggests that we may see a slowdown in hikes going forward.  Last week, we saw the Bank of Canada only raise rates by 0.5%, which may be a sign of things to come from other major central banks.  The Norges bank and Bank of Australia have rate decisions this week.

The Eurozone composite PMI came in last week in line with the UK figures and showed a sharp slowdown at 47.1 for October.  Eurozone manufacturing and services PMI are due this week. The inflation data for individual countries did suggest we will have another rise in overall Eurozone inflation for October.  These two pieces of data encapsulate the challenge faced by the ECB.

Last week, we saw treasury yields fall by 0.25%, suggesting that markets expect central banks to slow the pace of rate hikes.  Partly as a result, we saw the US dollar have a weaker tone last week, as markets decide whether rate hikes from the Fed may be cooling.

Although the expectations have fluctuated with some weaker US data, the markets generally expect a fourth successive 0.75% hike. It is more likely that the Fed will stick to a hike of this level, but may adjust their future policy guidance. The Fed’s focus has remained on bringing inflation back down to target.  With growth bouncing in the third quarter, and employment still strong, it is unlikely that the Fed will move too far at this meeting.

The other focus this week will be Friday’s labour market report.  This will have implications for policy beyond this week. We anticipate another solid report showing that the labour market remains buoyant and could continue to support inflation.  Manufacturing, construction spending and factory orders will add further colour to the picture in the economy.