Market Report – Restrictions eased in England; EU PMI data to suggest a return to growth; Concerns over US inflation increase 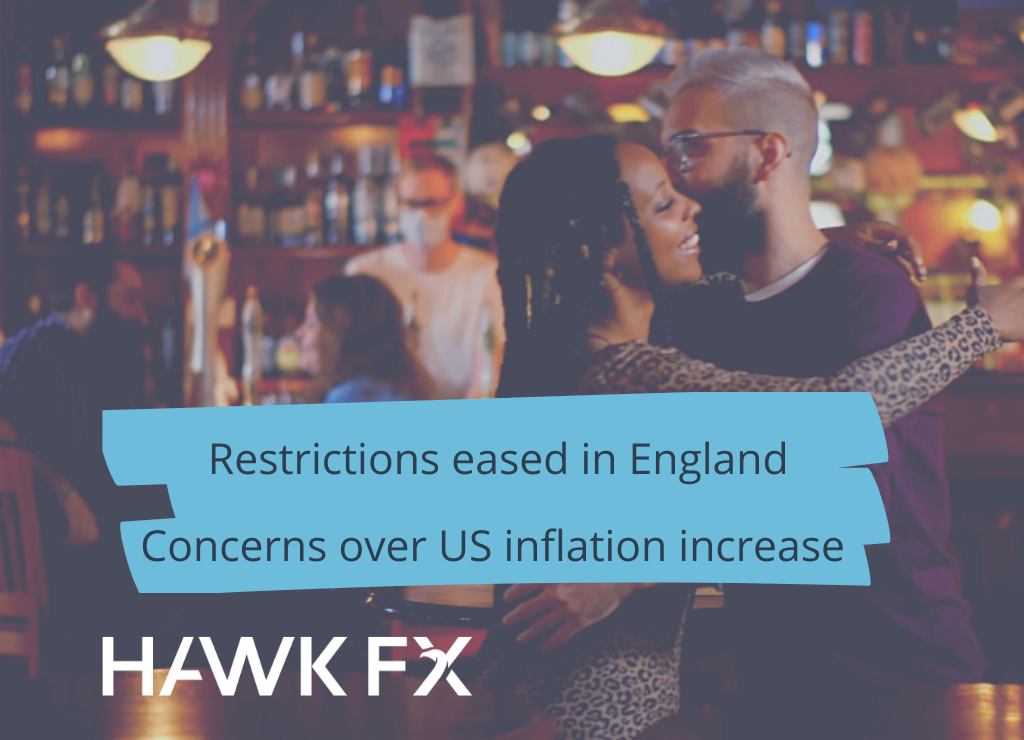 Restrictions in England have been eased further from this week. Despite the concerns about the new Indian Covid variant, Boris Johnson suggests that all restrictions could still be removed on 21st June.  The data will no doubt be watched closely, as there is expected to be a further boost to the recovery.  Meanwhile, comments from Matt Hancock and others suggest people shouldn’t travel abroad to most countries on holiday.

April retail sales are expected to show a solid rise of around 5% given the easing of restrictions. The May GfK consumer confidence is likely to show sentiment improving further potentially to one-year highs. With the rebound and inflation increases, the April CPI figure will be closely watched. It is forecast to be around 1.6% in March, mainly due to higher energy prices. This may increase further in the coming months.

Also this week, we will see the ‘flash’ manufacturing and services PMI readings for May.  Both are expected to hold above 60, showing solid growth, in line with the expected GDP growth in the second quarter, following an increase of 2.1% in March. We also expect to see unemployment fall further to 4.8% reflecting the ongoing support from the chancellor.

EUR – PMI data to suggest a return to growth

In Europe, the focus will be on the PMI data for May. In the Eurozone, the manufacturing measure is expected to slip back slightly to 62.4 following the very high 62.9 recorded in April. The weaker services reading moved above 50 in April for the first time since September.  It is likely to rise further this month to around 53.2. If we see readings at this level, they would suggest positive GDP growth is likely.  This would be a reassuring sign following the fall into technical recession to be confirmed by the second estimate of Q1 GDP growth. Eurozone industrial production, meanwhile, grew by only 0.1% in March.

Last week was more volatile as concerns increase that a rise in inflation will prompt earlier monetary policy action. There was a further increase in commodity prices due to oil prices. A much higher-than-expected April consumer price inflation of 4.2% suggests supply shortages and commodities are fuelling price rises. US Federal Reserve policymakers continue to argue that inflation pressures are transitory.  They argue that slack in the labour market should prevent a sustained rise.

This week we will see a lot more central bank speakers in the US along with the minutes of the last Fed policy meeting. The policy message is likely to be dovish, reiterating their intention to keep policy loose.  That is providing only limited reassurance to markets where concerns remain that policy will need to change as the recovery gathers momentum.

Retail sales were unchanged in April following a 10.7% rise in March whilst industrial production rose by a steady 0.7%. Both May manufacturing and services PMI readings are expected to post a further rise in May from already high levels in April.  This will add to expectations of a strong acceleration in GDP growth.