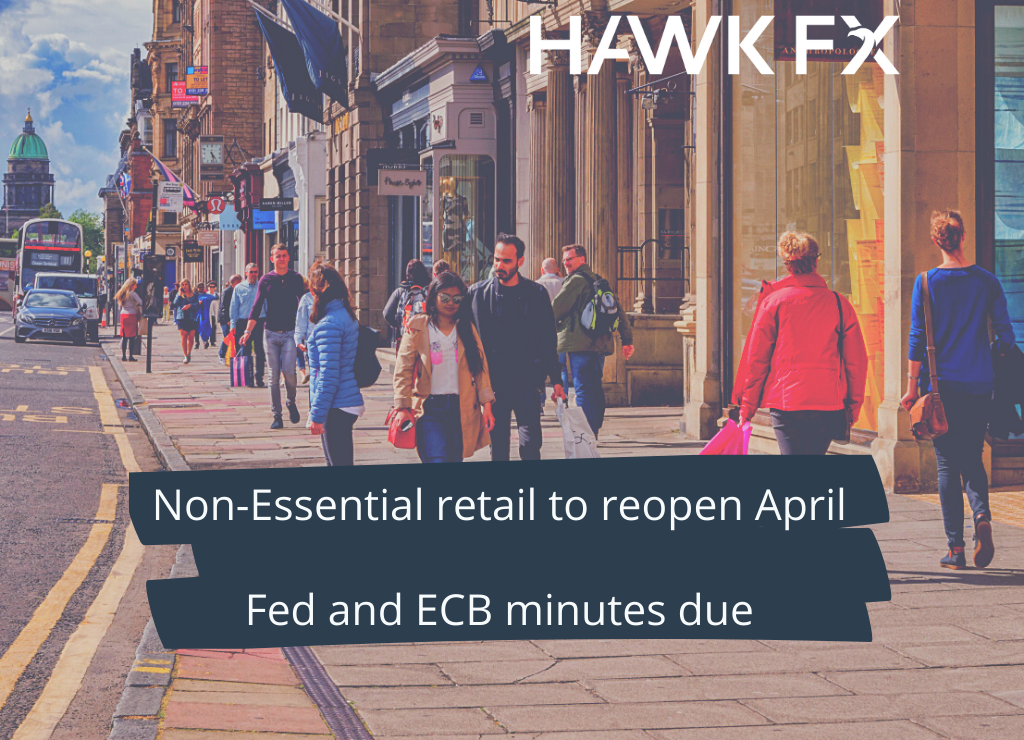 As we move into the second quarter, we expect a return to growth in the UK, with surging US growth but uncertainty in the Eurozone. The US has a further $1.9 trillion fiscal stimulus to provide a further boost, with both the UK and US on target with vaccinations and removal of restrictions. The US is also proposing a $2.25 trillion infrastructure plan. The IMF is expected to revise up its global economic growth forecasts today.  The last estimates of 5.5% growth in 2021 and 4.2% in 2022 were already the strongest in nearly 50 years.

Whilst GDP has almost certainly fallen in the first quarter after growing at 1.3% in Q4, survey evidence suggests increasing confidence going forward. The recent composite PMI and GfK consumer confidence surveys were better than expected at 56.6 and -16 respectively.  The government have said that the reopening of the economy remains on track.  This will allow consumers to spend some of their ‘forced’ savings.  The savings ratio rose to a record high of 16.3% last year from 6.8% in 2019.  Services and construction PMI’s are likely to show similar strength this week after manufacturing PMI were revised up to a decade high 58.9.  Sterling has been one of the strongest major currencies in the first quarter, up 1.2% against the US dollar though below highs and over 5% against the euro.

Whilst growth is picking up in many economies, the situation is more uncertain in the Eurozone. Business and consumer confidence showed improvements in March.  Overall, however, the sluggish deployment of vaccines remains a concern.  The EU has only vaccinated around 16% of the population compared with around 50% in the UK and US. Vaccine supplies and rates will hopefully pick up in the second quarter, which should enable countries to reopen their economies. France announced a new four-week national lockdown, while Germany’s Chancellor Merkel is reportedly mulling over whether to assert federal control on measures to combat the virus.  This all suggests the economic recovery will be further delayed.

The ECB will publish minutes of their most recent policy meeting this week.  The ECB has stepped up bond purchases and German 10-year bund yields, which have risen 25bps, are still negative at -0.32%. Compared to other central banks, the ECB is more concerned about tightening financial conditions.  This is particularly due to the fragile state of the Eurozone economy. The euro has fallen to new lows for this year.  This week, we will see further data including unemployment and services PMI for the area.  We will also have German factory orders and industrial production which are expected to show modest growth.

The Federal Reserve will also publish minutes of the recent policy meeting. They are going to start to struggle with the rationale for keeping policy accommodative. Policymakers will face pressure to signal the tapering of asset purchases given the accelerating economic growth and inflation. They will, no doubt, continue to point to subdued domestic inflation pressures as there is still significant spare capacity in labour markets. This will also become harder to justify if we continue to see strong employment, with the unemployment rate falling to 6% whilst non-farm payrolls increased by over 900,000.

These employment figures do not show the fact that employment is still nearly 9 million below pre-Covid levels.  Whilst the unemployment rate, though it has fallen from 15% to 6% likely underestimates the true slack in the economy with many not currently looking for work. US Treasury yields have risen strongly this year with 10-year at 1.70%.  This shows that the markets expect a first Fed hike to be early 2023. The Fed has so far been relatively relaxed about rising yields because they think they reflect expectations of economic recovery. The pickup in inflation is also likely to be seen as a reversal of last year’s deflationary pressures.  The Fed will likely ‘look through’ this without evidence of a more permanent rise.