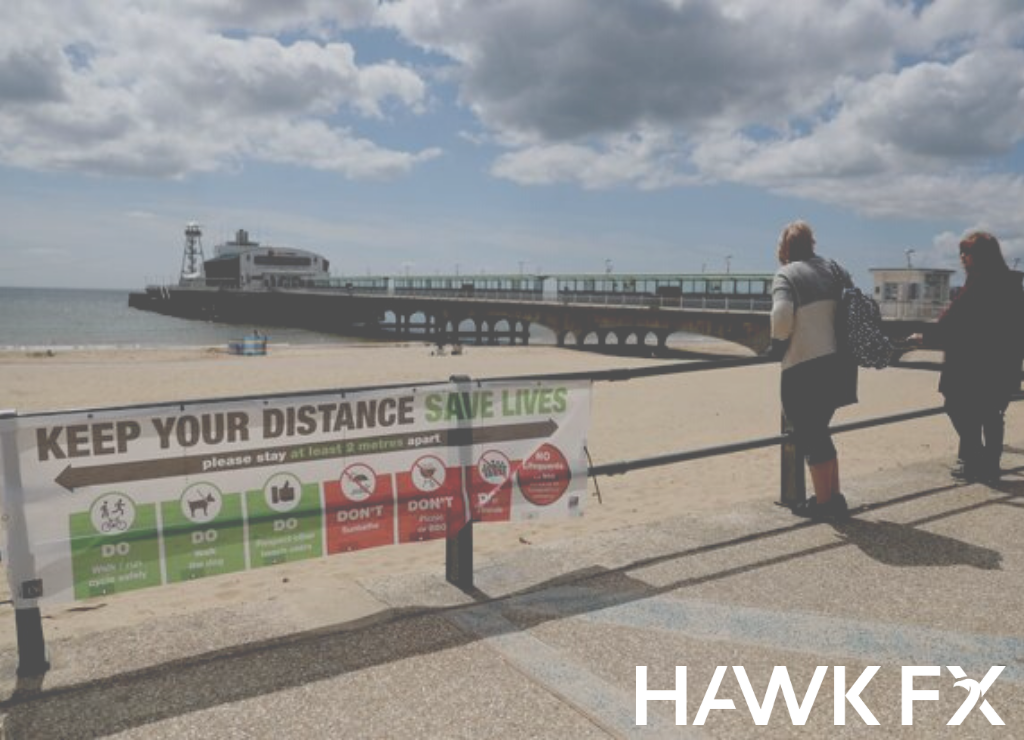 This week is a very busy one for UK economic data releases. The manufacturing and services PMIs will be the first updates for August. We expect both to show further increases.  The services PMI should be positively impacted by the government’s temporary VAT reduction and from the easing in lockdown restrictions. The services PMI could hit a five year high around 58.  We also expect manufacturing to move higher to 55.  The preliminary GfK consumer confidence reading will provide a further update with a small rise expected to -25, which is still well below pre-pandemic levels.  Retail sales may not show further increases as pent-up demand wanes. We expect July inflation to increase slightly, though this will be temporary as it will likely fall in August with the governments ‘eat out’ scheme and temporary VAT reduction.

Last week we saw dreadful GDP numbers with the second-quarter figure showing a 20.4% fall.  The figures include an 8.7% increase for the month of June.  Technically, these figures put the UK in a recession with two-quarters of negative growth. Employment fell by 220k in the 3 months to June but the unemployment rate held steady at 3.9%.  The British Retail Consortium (BRC) like-for-like retail sales put in another positive show, rising 4.3% year on year.

The UK government has added to quarantine countries with the acceleration in Covid-19 cases on the Continent. Markets are waiting to see whether further countries are added this week.  A further easing of lockdown measures in areas such as bowling alleys, casinos and live indoor performances was also announced.  This should provide a further boost to the economy.

Last week saw further positive data from Europe, with industrial production growing by 9.1% in July.  The German data was also positive, with the ZEW survey rising for the 5th time in succession.  This week, we expect August data to start with positive PMIs. We expect a further increase in the manufacturing PMI to 52.5. On the services side, we may see a slight increase, though there are concerns the figure will dip after the strong rise to 54.7 last month.

The more widespread rise in Covid-19 cases is raising concerns that the pickup in activity will falter in the coming months. Further evidence on infections rate rises will be watched very closely in the coming weeks. This week’s PMIs will be closely watched for any impact from these rising cases, though it will likely start to show up in next months data. Meanwhile, the latest round of UK-EU negotiations is due to start today.

Concerns continue about a gradual resurgence in Covid-19 cases around the world with cases still not falling in the US.  The markets are also concerned about US politicians’ failure to reach agreement on further fiscal stimulus.  As a result, the US dollar has continued to trade close to the bottom end of its recent range against both the euro and the pound. Despite the increase in coronavirus cases, some economic data has surprised to the upside, with retail sales and industrial production continuing to increase.  The trade deal review between the US and China was postponed over the weekend.  No date has been set for a new review, though some think more time may be given to allow Chinese purchases of US goods to increase.

The August PMI data will be seen as timely updates on the pace of the recovery. We expect manufacturing to rise to 51.4 and services to 50.7. This would bolster expectations that the economy continues to grow despite the increase in Covid cases.  The PMIs seem to be underestimating the pace of activity when compared to other indicators, such as the ISM surveys. The New York and Philadelphia Fed surveys will provide a further indication of activity for August. Lastly, the US central bank will release the minutes of its latest policy meeting. The discussion on ‘forward guidance’ will be interesting as many analysts expect the Federal Reserve to be more explicit on the criteria for policy changes going forward.