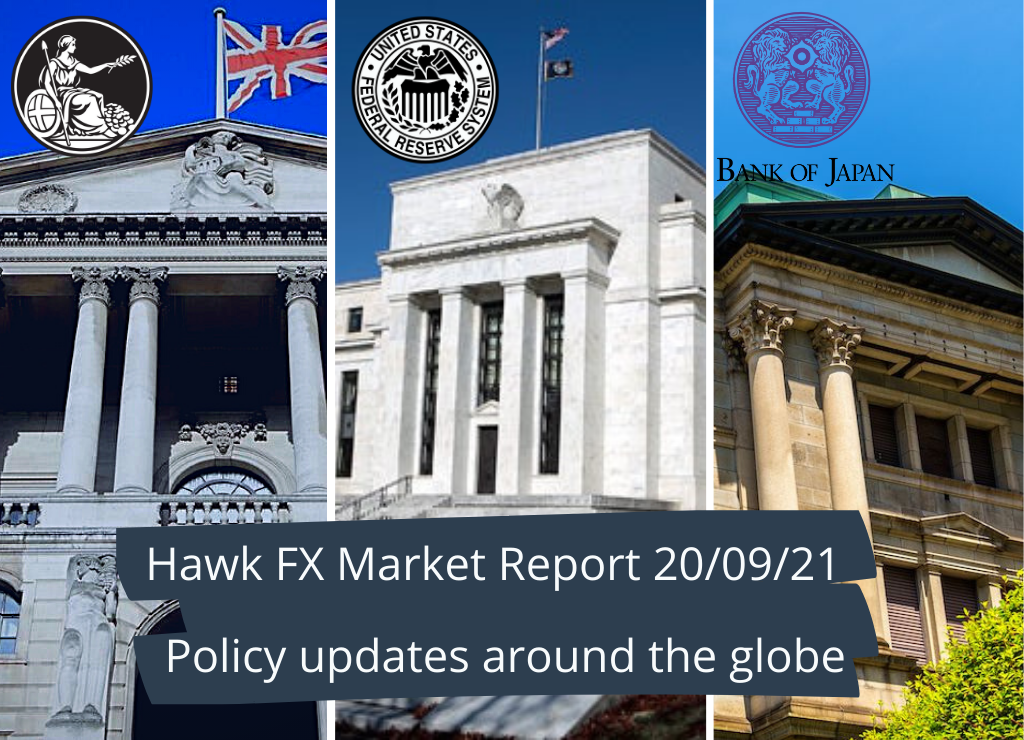 The Bank of England gives a policy update this week follows a slowing of economic activity over the summer months.  After the initial surge when restrictions were eased, this deceleration may have more to do with supply constraints.  There are two new policymakers – Huw Pill and Catherine Mann.  If their views lean towards policy tightening, it could shift the balance of the committee. Overall, we expect policymakers will want to move very slowly with any changes to the current very easy monetary conditions.

Inflation jumped sharply in August to 3.2%, which is close to a 10-year high. Bank of England Governor Bailey will have to write an open letter to Chancellor Sunak explaining developments. Inflation is likely to rise towards 4% before year-end and could be above the Bank’s 2% target for 2022.  A tax increase to fund additional health & social care funding has already been announced.  The BoE will be aware that the Budget on 27th October may see further tightening of fiscal policy.

The September PMIs are the other major data this week, showing slowing growth over the last three months in both manufacturing and services. We expect manufacturing to continue to fall, though services may post a small rebound.  With positive employment data but weaker retail sales last week, the picture around consumer confidence continues to look mixed.

The Eurozone PMIs have been following a similar path to the UK and US and also fell in August.  The manufacturing and services indices are however both higher than those in the UK at the moment.  This may be due to the easing of restrictions and rebound in activity happened later. Both PMIs are expected to fall further in September. The German IFO will also provide indications of the strength of the Eurozone economy in September.

Whilst the ECB is not providing an update this week, the Swedish Riksbank and Swiss National Bank and Norges Bank will all provide policy updates (along with the Bank of Japan).  Not changes are expected from these updates, though they will all have an eye on recovery and inflation and it is likely a case of when and not if action will need to be taken.

The number one issue for the Fed at their policy meeting will be the timing of any ‘tapering’ of its asset purchases. Fed Chair Powell has suggested that this may be imminent. Although this may happen this week, it seems less likely following the disappointing August employment report.  It is likely they will hold off any announcement until at least the next meeting in November. The Fed’s forecast updates may see changes to interest rates expectations.

Whilst we are likely to see no policy update, it is possible that we will see a majority of projecting a rate increase by the end of 2022. This would likely lead to further dollar strength. A Federal budget for next year is still yet to be passed by Congress, which leaves more for the Fed to consider.  An imminent breach of the debt ceiling is an additional uncertainty.

In the meantime, near-term inflation trends remain a concern. Inflation dipped slightly to 5.3% in August, providing some support for the idea that this is transitory. Even so, inflation is still well above the Fed’s target. Retail sales rebounded by 0.7% in August, following the July decline. This wee, the PMIs are expected to be relatively weak whilst still supporting growth.