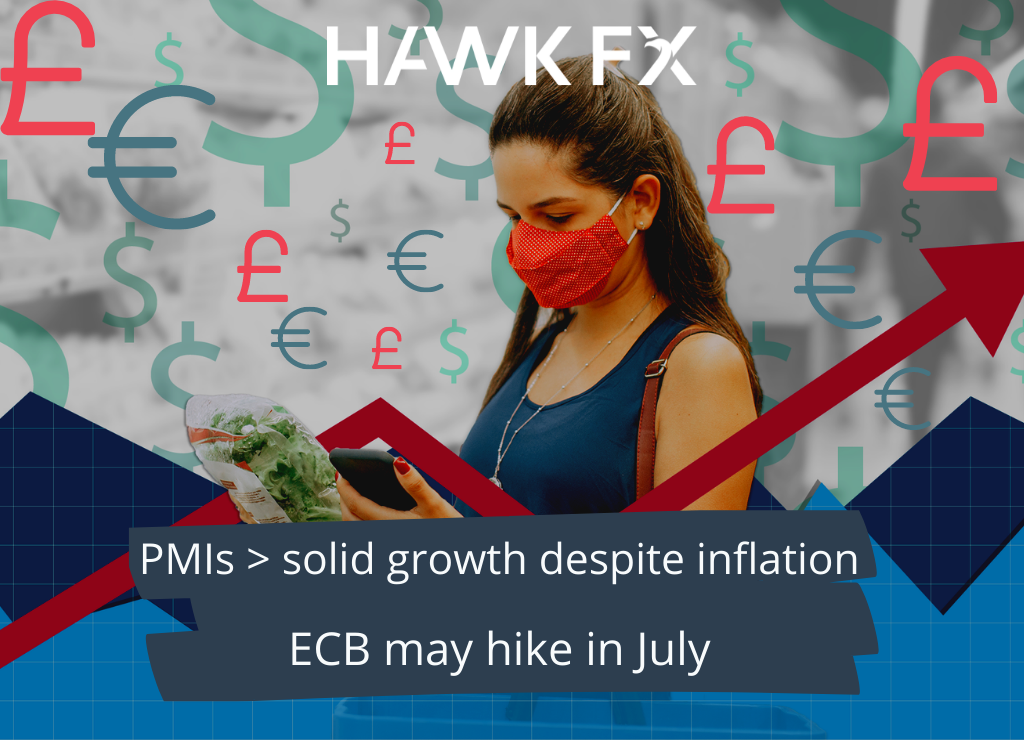 GBP – PMIs to show solid growth even with inflation at 9%

Uncertainty high inflation (now 9%)and the impact on growth continue to be the main theme across most markets.  The Bank of England has been raising rates at each meeting, but it is unclear whether it will do again in June. Comments from BoE Governor Bailey and Chief Economist Pill suggested that another rate hike is likely.  There is likely to be a split decision again next month.  These comments that more hikes “might still be appropriate”, saw sterling rebound from the recent lows.

This week we will see manufacturing and services PMIs. Both measures have still been pointing to continued growth.  The reading for May will have been impacted by the Ukrainian crisis and Covid restrictions in China but, the market still expects to see solid growth. We expect manufacturing to rise to 56.4 and services down, but still showing solid growth at 57.2.  The labour market remains tight, whilst retail sales rose, despite consumer confidence falling again in May.

We will also see the monthly public finance data this week.  This will be more closely watched than usual for indications of the leeway the government has to offer extra support to households. Chancellor Sunak said he has little room for more fiscal stimulus recently. As concerns about the ‘cost of living’ increase, the calls for action have increased.  Recent media reports have suggested a package may be introduced before the parliamentary recess in July. These measures could include specific support for fuel bills or a temporary VAT cut.

EUR – Some ECB members favour a hike in July

There are still a few weeks to go before the next announcement from the European Central Bank on the 9th of June.  All central banks currently face a dilemma over whether concerns about high inflation on the one hand and headwinds to growth on the other. Recent ECB comments indicate that a majority may favour or at least be open to an interest rate hike at the 21st July meeting.  Despite ongoing economic uncertainties, the minutes from the April meeting showed that several policymakers were ready to move rates in July. We may see a signal towards a July hike at the June meeting.

This week, PMI data and the German IFO survey will provide indications of the economic trends. The Eurozone PMIs have been solidly in growth territory and we expect that to be the case again in May. The German IFO survey has been less optimistic.  We expect a further fall in confidence this month following a sharp drop last month.

Compared to other central banks, the Federal Reserve’s message is clearest.  Its policymakers seem to be united in showing more concern about inflation.  The markets expect 50 basis point increases in interest rates in June and July. We will see the minutes from the May policy meeting this week, but there is not expected to be much new information to digest.  The only thing that may surprise markets is if some of the members were keen to see larger rate hikes, like the 75 basis points rumoured.

Aside from the Fed’s minutes, there is a busy data calendar this week.  The Fed’s preferred inflation measure is likely to confirm other data that inflation fell in April, and we may have seen the peak.  New home sales are likely to have fallen in April, following the series of interest rate hikes. Consumer spending numbers for April are expected to show solid growth by contrast.  The PMIs readings are expected to show solid growth similar to the UK and European figures. Retail sales rose by 0.9% with Industrial production growing by 1.1% in April.  This level of growth will likely keep the Fed comfortable that they have scope to raise rates further.