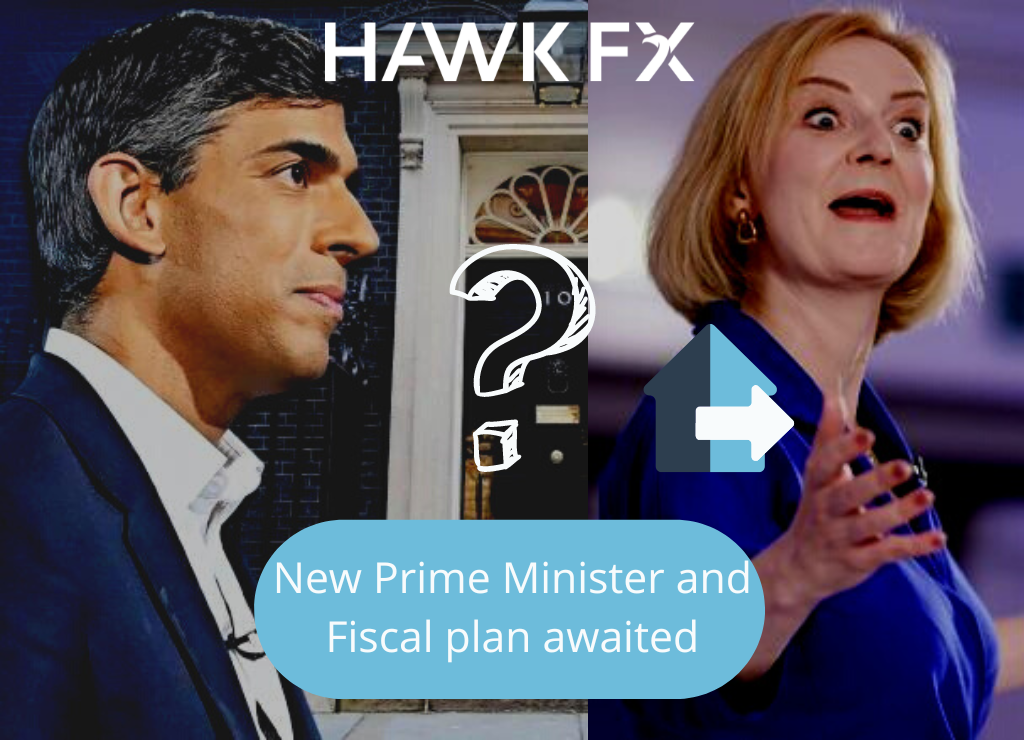 Political turbulence continues to be the main driver of the markets in the UK.  Last week, we saw the reversal of the mini-budget measures by Chancellor Jeremy Hunt lower gilt yields and support the pound.  Following continued chaos in the government, Liz Truss resigned, and the favorite to replace her is Rishi Sunak.  The markets have been considerably calmed by a shift in policy back to fiscal prudence.  The likely new Prime Minister is also seen as a safer pair of hands for the economy at a difficult time.  We may have a new PM as soon as this afternoon if Penny Mordant doesn’t receive enough nominations or pulls out.

The focus for the markets is whether the new PM will maintain political stability and continue with the newest Chancellor’s policy course.  As things stand, we are still expecting to see the medium-term fiscal plan and OBR forecasts next Monday.  This could be a challenge if the conservative leadership contest goes to a party vote to be decided on Friday!

Last week, we saw inflation rise above 10% in September, whilst retail sales fell sharply by 1.4%.  This highlights the challenges for the Government and the Bank of England. This week, we will see the flash PMIs for October, which is expected to show further contraction in manufacturing (around 48) and virtually no growth in services (around 50).

This week, the focus in the Eurozone will be the ECB’s policy update.  Even though the Eurozone economy continues to lose momentum, the ECB is expected to increase rates by 0.75%.  The markets are currently expecting further smaller hikes in December and next year.  The focus of the ECB remains on inflation and preventing second-round effects. The press conference with President Christine Lagarde will be closely watched.  There may well be questions around the timing of quantitative tightening and what level rates may get to.

We also see the PMIs this week, with manufacturing expected to drop to 47.6 and services to 48.1. Both would represent a further contraction of the economy and would suggest we will see GDP shrink in the last quarter. Third-quarter GDP reports will be released for Germany, France, and Spain. France and Spain are forecast to show slight growth, though the German economy may already be in recession.  Inflation is also expected to show rising costs, with headline inflation close to 10%.

USD – GDP to grow steadily at around 2%

In contrast to the UK and Europe, the US economy continues to grow at an impressive rate.  Figures this week are likely to show growth in the third quarter of around 2%.  Although the housing market has been slowing, consumer spending, helped by lower oil prices has been stronger. Positive business investment and a positive contribution from net trade have also helped the US economy.

The PCE deflator, which is the Fed’s preferred inflation measure, is forecast to rise to 6.3% in September, despite lower energy prices.  This explains the hawkish Fed comments that policy rates are likely to stay high next year. The Bank of Canada is expected to retain a hawkish tone, raising rates by 0.5%.  The Bank of Japan is likely to hold rates at current ultra-low levels, which has seen the US dollar at the strongest level for 30 years against the Yen.