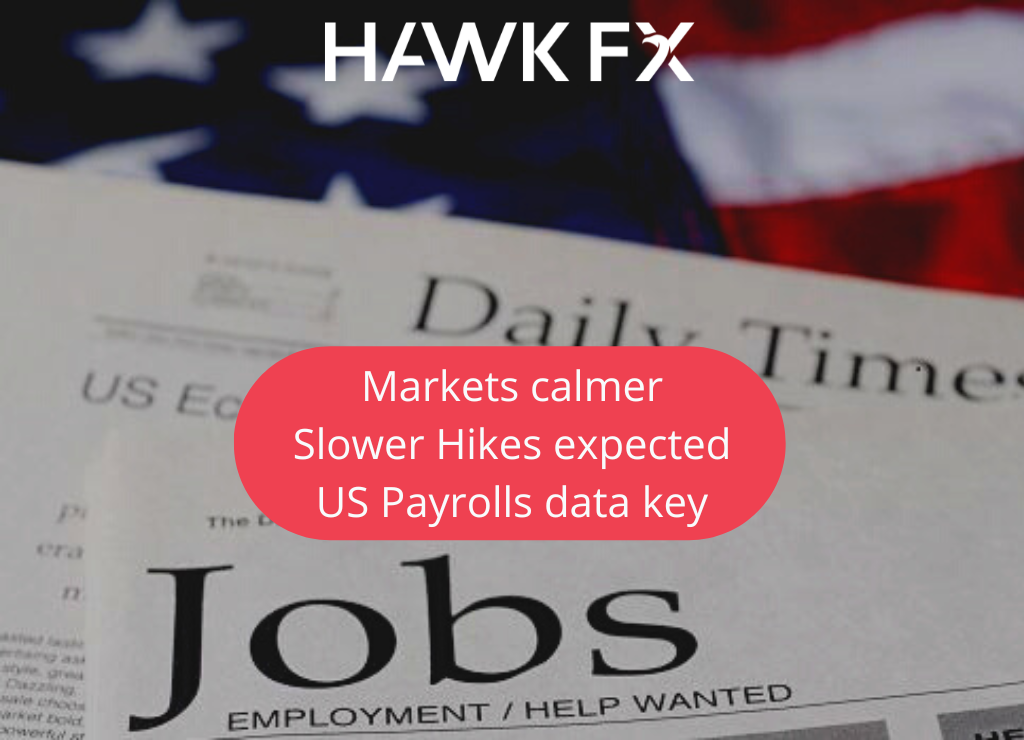 The volatility has reduced somewhat over the last few weeks, with the markets calmer with the government and budget.  The markets are expecting an earlier easing in the pace of monetary policy tightening. This has seen 10-year gilt yields fall below 3% for the first time since early September. This change in direction has led to a slide in the US dollar against many currencies including the sterling.  Comments from Bank of England policymakers have been guarded. The markets believe the BoE will make a smaller rate hike than the 75bp moves approved last time.

This week, we have the Bank of England’s monthly Decision Makers Panel survey which is expected to focus on inflationary pressures. In October there were signs of strains easing but wage pressures and recruitment difficulties remained high. Business uncertainty was lower than in September but remains very high. The composite PMI figures last week showed a similar level to October, still showing contraction at 48.3.

We will also see updates on consumer trends.  The November CBI retail survey will give an indication of spending trends, though this won’t include the Black Friday period. The October Bank of England bank lending data will give an indication of whether mortgage lending has been weakened by recent rate hikes. The manufacturing PMI for November will reiterate the initial reading was below the 50 expansion level for the fourth month.

There are only a few weeks until the next set of monetary policy updates. In the meantime, ECB officials seem to be indicating that the December policy decision will be a close call.  The speakers we have heard from seem to be signaling smaller rate rises next time. This week ECB President Lagarde will be speaking, though it is unlikely to reveal anything new about policy intentions. European Central Bank policymakers have generally been fairly guarded with their comments. The Sweden Riksbank was the latest to raise interest rates last week.

The key release this week is CPI inflation for November. After a further rising in inflation in October, this month markets are expecting modest declines.  We expect to see headline inflation fall back to 10.5% from 10.7% in October.  The core rate may also have dipped slightly to 4.9% from 5.0%. This clearly leaves inflation a long way above the 2% target and falling only marginally.  This will leave the ECB with a very difficult interest rate decision before Christmas. The Eurozone PMI improved slightly to 47.8, still showing contraction, with the German IFO index also improving slightly to 86.3.

The biggest data this week is Friday’s monthly labour market report. This is always important as a bellwether of US conditions.  It is even more key at the moment, with the Federal Reserve trying to work out whether inflationary pressures are easing. Recent data suggests that price pressures due to the international situation have eased.  The Fed is also concerned about domestic pressures and the impact of the tight labour market on wage inflation. The composite PMI falling to 46.3 in November also suggests an easing in the economy.

The October employment report showed a solid rise in employment but a small move up in the unemployment rate to 3.7%.  The Fed is also concerned about wage growth which seems to have levelled off, though it is still well above the 2% inflation target. We are likely to see a similar picture in the data on Friday, with no significant easing in pressures. The Fed’s preferred inflation gauge, the PCE deflator, is expected to confirm that inflation slowed in October.

The emphasis for central banks is now on expectations of a more measured pace of tightening. This week, the minutes of the November Federal Reserve monetary policy meeting will be released.  Comments from Fed officials suggest that a smaller rise of 0.50% is likely at the December meeting after four successive 0.75% rate hikes. The consensus is that further rate increases are still on the cards, which is unlikely to be changed by a speech by Fed Chair Powell this week.