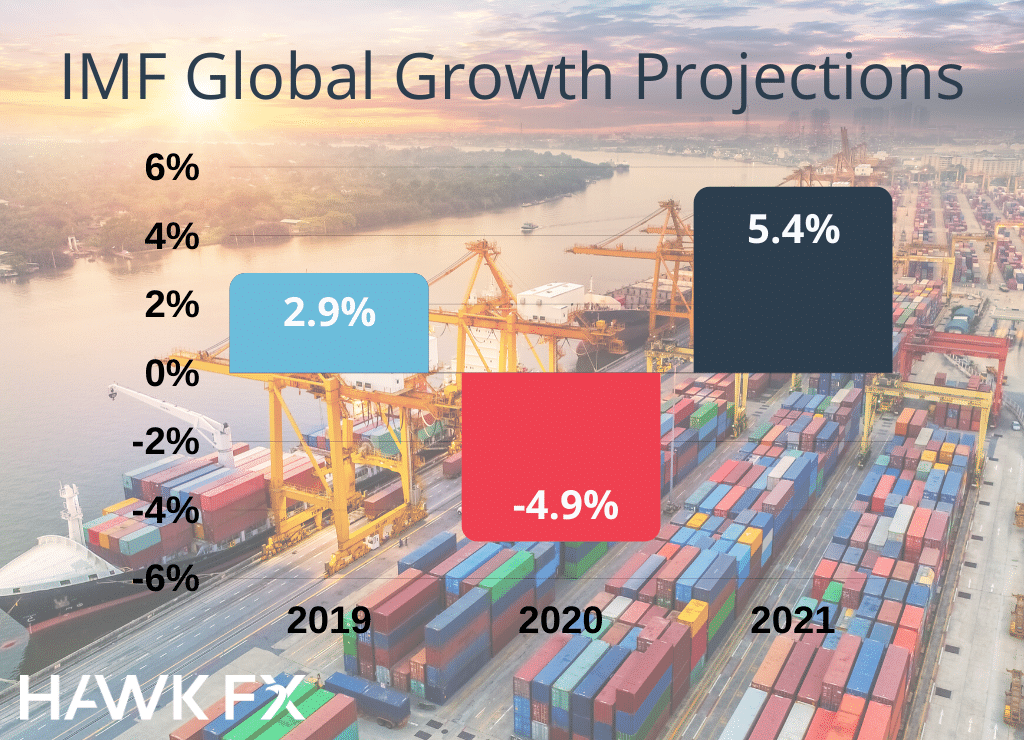 The latest IMF forecasts came as the IMF abandoned hopes for a V-shaped recovery.   In its latest economic update, it warned of a slow bounce-back from the deepest global recession in nearly a century.  This projection suggests a 4.9 per cent contraction in global GDP in 2020.  They revise world GDP downwards 6.5 per cent (to end-2021) from their January forecasts.  The worst-hit countries are forecast to be Spain, Italy, France and Mexico.  The UK is predicted to have the fifth-largest downturn.

According to these forecasts, Britain will need to borrow more than £400 billion over two years due to the coronavirus impact on public finances. UK GDP is forecasted to fall by 10.2 per cent this year but to grow 6.3 per cent in 2021.  The figures for the eurozone are similar.  The weak rebound for UK and world growth reflects “persistent social distancing, greater scarring from the larger-than-anticipated hit to activity during the lockdown”. The IMF also noted, “a hit to productivity as surviving businesses ramp up workplace safety and hygiene practices”.

Many economies have introduced wage support, such as the UK’s job retention scheme.  The IMF noted that “the global decline in work hours compared to the fourth quarter of 2019 was likely to be equivalent to [the loss of] more than 300 million full-time jobs”.  On a more positive note, Britain’s response to the crisis has been stronger than many.  Direct fiscal support so far is around 6 per cent of GDP in additional spending and forgone taxes.  This stimulus package will have a short term impact on public finances, with an expected budget deficit this year of 12.7 per cent of GDP.  This would total £270 billion for 2020 with an ongoing deficit expected within 2021 of £140 billion as the economy recovers the lost output.  UK national debt recently rose above 100 per cent of GDP and will likely stay there for some time. The sustainability of the UK’s debt is seen as strong, though this may be tested as uncertainty continues with Brexit on the horizon.

Within their projections, the IMF noted a higher-than-usual degree of uncertainty due to key assumptions about the fallout from the pandemic. Based on current figures, the “trough” of the global recession was likely in April, with activity picking up as lockdowns have eased.  A further risk is that a second spike that leads to additional lockdowns which could slow world growth in 2021.  On the positive side, they suggested that life could return closer to normal.  In this case, the recession this year will be slightly less bad and the recovery next year will be 3 per cent stronger.

Their recommendations include “building global stockpiles of essential supplies and protective equipment, funding research and supporting public health systems”.  Their suggestion was also for governments to support the recovery with further stimulus. They noted that the broad-based fiscal stimulus to support the recovery could focus on public investment.  Areas to provide ongoing benefits to future growth could include physical and digital infrastructure and the move to a lower-carbon economy.