UK Retail sales fall by 1% adding to the gloom 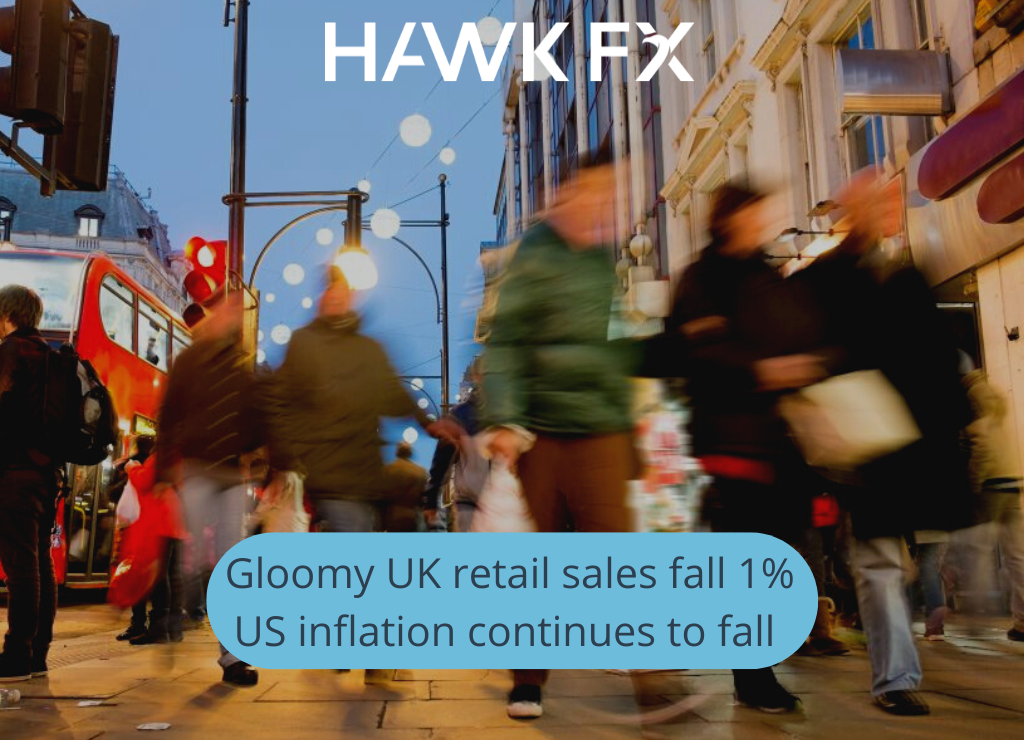 GBP – Retail sales fall by 1% adding to the gloom

Last week, December retail sales posted a big fall of 1% and the GfK consumer confidence measure fell 3 points in January.  This data will give policymakers some cause for concern.  The CBI and retail surveys will give more of an indication about retail trading through December.  This week, we will also see whether the manufacturing and services PMI readings stayed below the key 50 contraction level.  Markets expect a slight fall in manufacturing output and either little or no growth in services. The data will also give some indication of whether supply chain bottlenecks will ease, which should have an impact on inflation pressures.

Bank of England officials will go into their silent period ahead of their meeting and no speeches from rate-setters are scheduled for this week. We are going to have to wait for the early-February meeting to hear about their policy intentions.  We expect a further 0.5% rate hike to be the result of that meeting.

The markets continue to expect that easing inflationary pressures will mean that central banks soon finish this cycle of rate hikes. Inflation for December came in slightly lower at 10.5%, whilst the core rate remained the same at 6.3%.  The unemployment rate was also unchanged at 3.7% for November, with pay growth accelerating again.  Based on these figures, the Bank of England is likely to continue with further rate hikes in the near term.

Comments from European Central Bank President Lagarde suggested that the outlook is more promising than when they hiked rates in December. There are several speeches from ECB policymakers this week including one from President Lagarde.  They seem unlikely to change market expectations of another 0.5% rate hike in February.  The expectations component of the German ZEW survey rose to an 11-month high in January. The German IFO survey for January is also expected to continue this more positive picture.  That seems consistent with Lagarde’s comments that the economic environment looks a touch less negative.

The manufacturing and services PMI readings for the Eurozone were both below 50 in December. A rise in the services index should take it back above the 50, growth level for January.  In contrast, the manufacturing reading is likely to stay well in contraction territory due to weak order books and ongoing supply challenges. Nevertheless, overall, the data is expected to be consistent with the possibility that the Eurozone may still dodge a technical recession.

USD – Inflation continues to fall, weaker start to the year for the economy

Equity markets in the US have been boosted by the growing expectation of an early rate peak but they need to consider how much rate hikes have affected economic growth. Major corporations will report profits over the next few weeks will provide some indication.  In the meantime, some disappointing US economic data last week included a big fall in December retail sales. Industrial production also fell sharply in December partly due to the impacts of the bad weather.

With the February monetary policy updates fast approaching Fed policymakers are now in their pre-announcement blackout period.  With evidence of falling inflation the clearest cut in the US, we are seeing some of the biggest falls in bond yields.  Markets expect a smaller 0.25% rate hike from the Fed this time around.  As a result of this shift in expectations, the US dollar has continued to come under pressure against the euro and sterling (and particularly against the Japanese yen). Federal Reserve policymakers have said that it is too early to call a halt to tightening and certainly premature to expect a cut in rates.

Data this week in the US is expected to continue the picture of a solid economy with falling inflation.  The final quarter’s GDP is expected to show moderate growth of 2.2%.  Durable factory goods orders for December and January PMI data will provide further insight into the economy at the start of this year. Both are expected to point to the likelihood of activity remaining subdued early this year.  The PCE deflator is expected to confirm that both headline and core inflation fell last month.