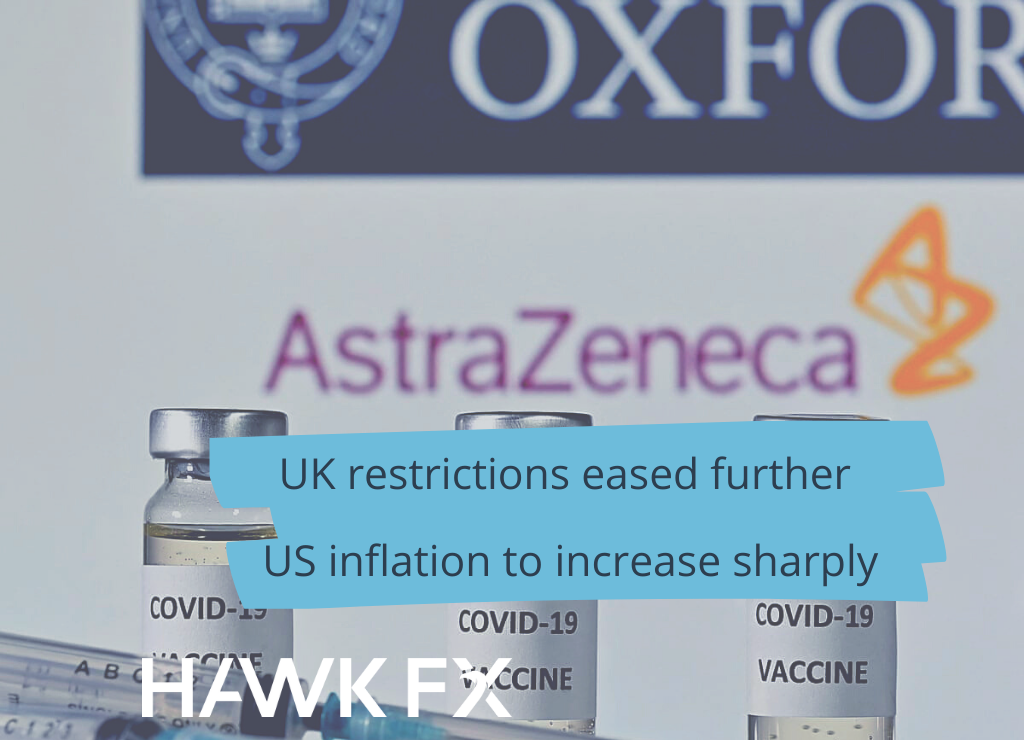 Today we have a further easing of lockdown restrictions in England, despite vaccine concerns and supply.  Non-essential retailers and some other consumer businesses are allowed to reopen. Pubs and restaurants will also be allowed to serve customers outside. The suggestion from the government is that the further loosening on 17 May also remains on course.

These moves are expected to lead a significant rebound in economic activity. In March, GfK consumer confidence and the three PMI indices (construction, manufacturing and services) posted significant rises. Last week, we saw the construction PMI rising at fastest since late-2014 at 61.7, with services showing strong growth at 56.3.  However, early 2021 activity has been restrained with GDP falling by 2.9% in January.  February GDP data tomorrow will either show a smaller fall or potentially a small rise.

We will also see the March retail sales estimate from the British Retail Consortium.  Retail sales showed a small rebound in February after a big fall in January. With the improvement in consumer confidence, sales are expected to have picked up in March. This is likely to continue to increase with the removal of Covid restrictions. Last week saw a sharp slide in sterling against both the euro and US dollar with further concerns around the Astra-Zeneca vaccine.

Last week saw further weak data from the Eurozone.  Eurozone services PMI was revised up to 49.6 in March but still below the 50 expansion level.  Industrial production in Germany and France by 1.2% and 4.3% respectively in February. The weakness of Eurozone data is expected to persist given the imposition of further restrictions.

Data for some of the larger countries point to a fall in February industrial production for the region. This would increase expectations of a fall in first-quarter Eurozone GDP. The German ZEW survey for April may give a slightly more positive picture.  It is expected to show a further improvement in both current conditions and expectations.

Of most interest to markets, this week will be March CPI. This is not the Federal Reserve’s preferred inflation measure but is the next inflation update.  Inflation is forecast to jump to 2.5% in March from 1.7% in February due to energy prices.  The ‘core’ rate is likely to have risen by less to 1.6%. Fed speakers are likely to reiterate the view that this is a temporary spike.  They may confirm that this data won’t mean a near-term change in monetary policy.

Most US activity data in February was worse than expected due to severe weather in the south. Big rebounds are expected in the March updates for housing starts, industrial production and retail sales. Retail sales may also be lifted by initial effects from the Biden fiscal stimulus package that was passed in March.  The ISM services survey for March rose to the highest ever level of 63.7 in March

Government yields have edged down in the US. This may be a sign that markets are gaining reassurance from central bank policymakers.  They suggest that a sustained sharp rise in inflation is unlikely and that monetary policy will remain very easy.