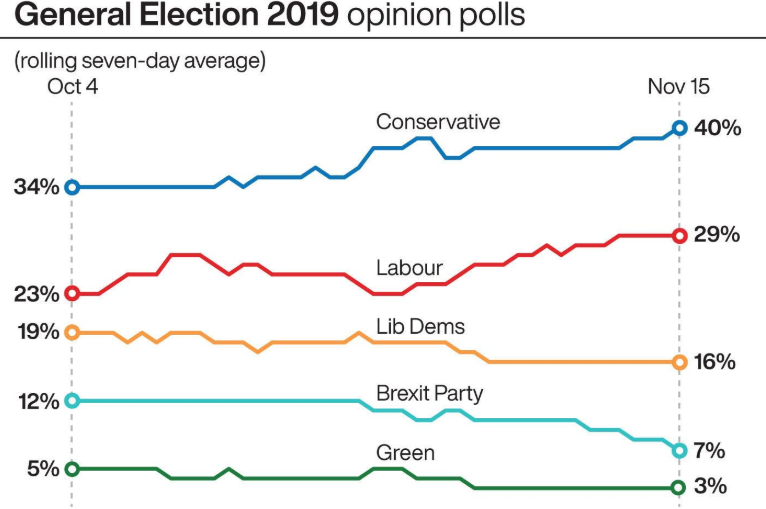 Focus remains on UK election polls.  Bookmakers now have the probability of a Conservative majority at greater than 50%.  As a result, markets pretty much ignored the past week’s data.  This was generally softer than expected, including GDP, labour market statistics, CPI inflation and retail sales. Polls suggest that support for the Conservatives and Labour has risen.  Support for the ‘remain’ parties and the Brexit Party have fallen, partly as the latter has withdrawn from many seats. With the potential for tactical voting, election pollsters are avoiding firm predictions.

The most significant political move was the Brexit Party’s decision not to field candidates in the 317 Conservative seats. Following this, the Brexit Party also stood down in some marginal seats to avoid splitting the Conservative vote.  With four weeks to go until the election, there is still a long way to go with election polls to be keenly watched.

GDP data confirmed the UK economy rebounded in the third-quarter, avoiding a technical recession.  This wee we have new ‘flash’ estimates of monthly PMI surveys. We expect a small decline in the November manufacturing PMI but a rise in the services PMI back into growth territory.  This will still be in line with flat or slightly negative quarterly growth.  Sterling has continued to shrug off the data, hitting recent highs on election expectations.

The minutes of President Draghi’s final ECB policy meeting are likely to reaffirm the need for monetary policy to remain accommodative.  It will no doubt ask for fiscal policy to play a bigger role in supporting growth. Draghi’s argument was that more fiscal stimulus would shorten the time that interest rates remain negative.  This is not popular in Germany and other northern European countries. Last week Germany skirted a recession, posting a marginal 0.1% increase in the third-quarter.

The new ECB President Lagarde may continue to persuade governments with fiscal headroom to loosen their purse strings. For now, the German government is showing no signs of readiness to embark on fiscal easing.  Central fiscal capacity in the Eurozone still seems some years away. This week’s Eurozone flash PMIs are likely to show sluggish economic growth.  A number of ECB speakers will gain attention this week.  This includes President Lagarde herself, as well as Bundesbank President Weidmann who opposed the resumption of QE.

US interest rates are set to remain on hold at least through the rest of the year. Fed Chair Powell indicated this last week to Congress.  He also noted that policymakers remain concerned about downside economic risks. That is likely to be reflected in the minutes of the October FOMC meeting. Markets still attach a significant probability to a further rate cut in 2020.

Market attention remains on prospects of phase one of a trade deal with China. Meanwhile impeachment proceedings continue for President Trump. It remains unclear whether this will significantly affect Trump’s re-election chances. White House economic adviser Kudlow described a deal as ‘close’ but ‘not done yet’. This week we will see new and existing housing data along with the Philly Fed and Michigan consumer survey.