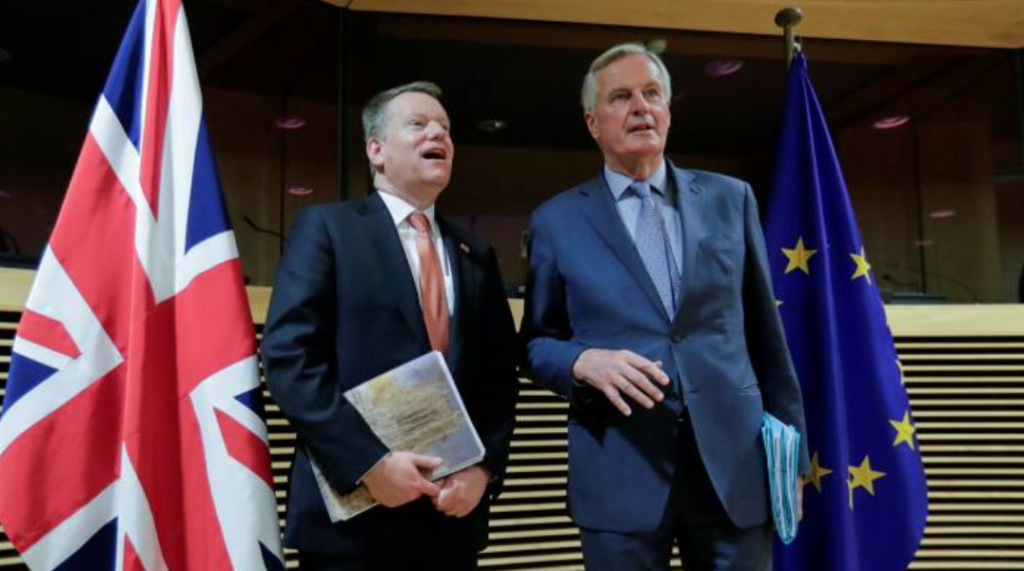 The final round of UK-EU talks is due to take place this week before the end of June extension deadline.  David Frost will discuss the future relationship with the EU’s Michel Barnier.  The deadline to extend the transition period beyond 31 December is the end of June. The UK has said it will not ask for an extension to the transition period. There remain issues with some key matters, especially relating to a level playing field in return for access to the single market. The UK says it only wants a deal that has been given to other countries. If there is no extension to the transition period, intense negotiations will resume in the second half of the year.  The risk of no agreement will no doubt increase if the transition period is not extended, with an impact on sterling as a result. Boris Johnson may hold face-to-face talks with his EU counterparts after the European Council meeting on 19 June.

This weeks data includes the final readings for the May PMI surveys. The headline indices may show modest upward revisions to 41 for manufacturing and 28 for services.  The later returns take into account the easing in lockdown restrictions. Both, however, will remain well below the 50 level reflecting expansion. GfK consumer confidence for May is expected to be steady at -34.  Personal finances for the next twelve months are becoming slightly less negative.

The ECB launched its Pandemic Emergency Purchase Programme (PEPP) in March, to buy €750bn of bonds.  There is an expectation in the markets for more policy stimulus to be announced.  President Lagarde recently suggested that Eurozone GDP is expected to fall by between 8% and 12% in 2020.  These are the ECBs ‘medium’ and ‘severe’ scenarios, rather than the ‘mild’ scenario of a 5% decline. Eurozone CPI inflation fell to just 0.1% for the May flash estimate.

The minutes of the last ECB meeting in April stated that policymakers “stand ready to adjust the PEPP and potentially use other instruments”.  They are expected to increase the stimulus if it becomes clear that more support is needed. Updated macroeconomic forecasts will show a sharp downward revision to economic growth from the March projections which still predicted 0.8% for 2020. Inflation forecasts of 1.4% in 2021 and 1.6% in 2022 are also likely to be revised lower.

Overall, the ECB is expected to announce a €500bn increase to its PEPP, although there is a risk it could be smaller or even deferred.   Interest rates are likely to be unchanged. Markets will be looking for more detail about the purchases under the scheme. Ms Lagarde may also be asked about the German Constitutional Court ruling which questioned the legality of the ECB’s asset purchases under its Asset Purchase Programme.

Last month’s US non-farm payrolls plunged by 20.5 million and the unemployment rate jumped up to 14.7%. Weekly initial jobless claims have continued to rise, but the pace of increase is moderating. Latest initial claims rose by 2.1 million for the week ending 23 May.  This is greater than anything seen during the global financial crisis, though we are down from the peak weekly rise of nearly 7 million at the end of March. Continuing claims fell for the first time during the pandemic to 21.1 million for the week ending 16 May from 24.9 million. For this week’s monthly data, we expect a further drop in payrolls of 10 million in May and a rise in the unemployment rate to 20%.  This would be the highest level since the Great Depression.

Before the official figures, we will see the ADP payroll report.  The ISM manufacturing and non-manufacturing surveys are likely to show modest improvements but continue to point to contraction. We also expect construction output and factory orders to fall substantially. GDP growth last week was revised down to -5.0%.  April consumer spending dropped 13.6%.  Risk assets rallied on economic reopening optimism, but US-China tensions continue to rise after following the new security law for Hong Kong being passed by China.