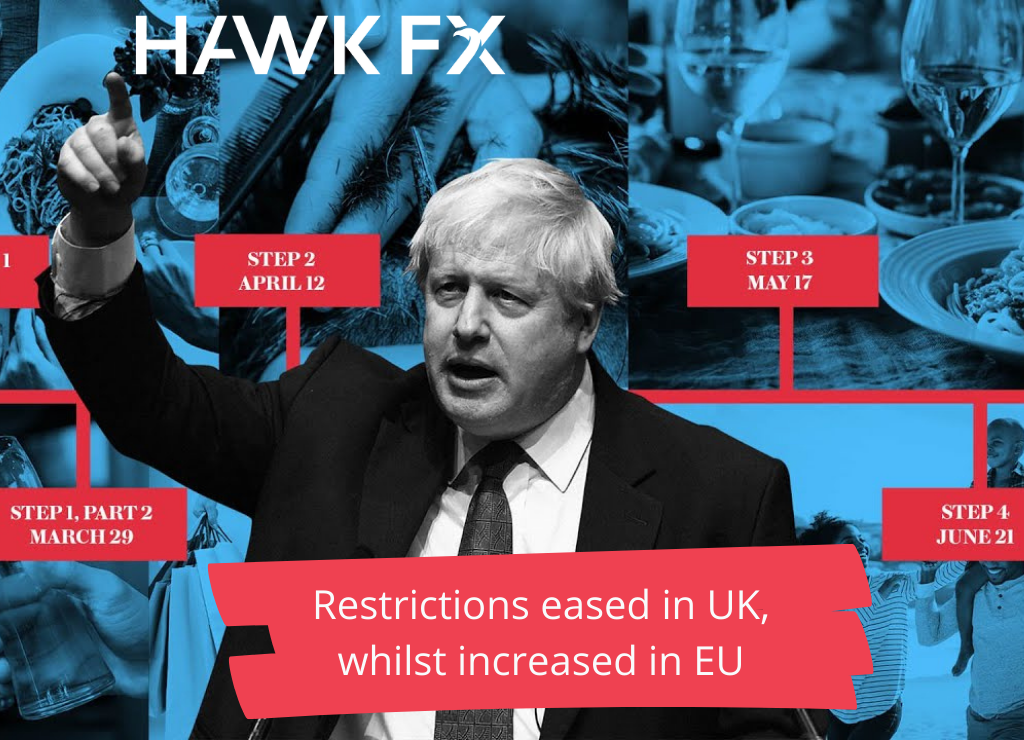 The possibility of a strong economic rebound continues to support markets.  Concerns remain of a new Covid wave that could lead to further restrictions which would affect this.  This week, there is limited data in the run-up to Easter.  There is a modest easing of Covid restrictions in England from today, with more significant changes due in April and May.  The impact of these changes on the reported number of Covid cases will be closely watched.

On Wednesday we will see the second estimate of further quarter GDP.  This is expected to affirm the initial 1.0% rise. The report will provide further information on the household savings rate. This has climbed during the pandemic due to forced saving driven by a lack of spending opportunities. The end of last year and the start of this year are expected to show further rises. This supports the idea that there is pent-up consumer demand that will be released this year.

Last week CPI inflation fell to 0.4% from 0.7% in January.  The unemployment rate unexpectedly fell from 5.1% to 5.0% with retail sales rising solidly by 2.1%.  There was further positive news from the PMI readings, with manufacturing up to 57.9 and services up to 56.8 in March. The initial strong manufacturing figure may be confirmed by the final reading this week.  Sterling has seen some strong gains against the euro this year and initially against the US dollar before dollar strength pushed back from its February peak.

Compared to the US and UK, the Eurozone economy is more uncertain. The March readings for the Eurozone PMIs and the German IFO survey were both positive last week.  However, those figures are based on data before the latest extension of Covid restrictions were announced.  The letter PMI updates may include downward revisions. This week, Eurozone CPI data for March is likely to show a rise in the annual headline inflation, but still well below the inflation target.

Concerns around the ‘third wave’ of Covid are particularly prevalent in the EU where the vaccine rollout has been particularly slow. We have seen an acceleration in EU Covid cases.  This has caused Germany to extend its lockdown and France to impose new Covid restrictions. Some emerging markets have also seen an acceleration in cases and concerns remain about the importation of new variants which could add to a third wave.

This week, we will see the March labour market as most markets are closed for Easter.  As usual, it will be seen as a bellwether of economic conditions. The figure for February was much stronger-than-expected at 379k. This was the biggest rise for four months, following very weak figures in December and January. The evidence from increases in payrolls and falls in unemployment benefit claims suggest growth is accelerating.

This week’s data is forecast to show a bigger rise than last month with a number over 650k expected by many.  We may also see a further decline in the unemployment rate to 6%. The ISM manufacturing survey is likely to provide further evidence that economic activity is accelerating. Income support payments from the fiscal package will soon be paid which should provide a further boost.