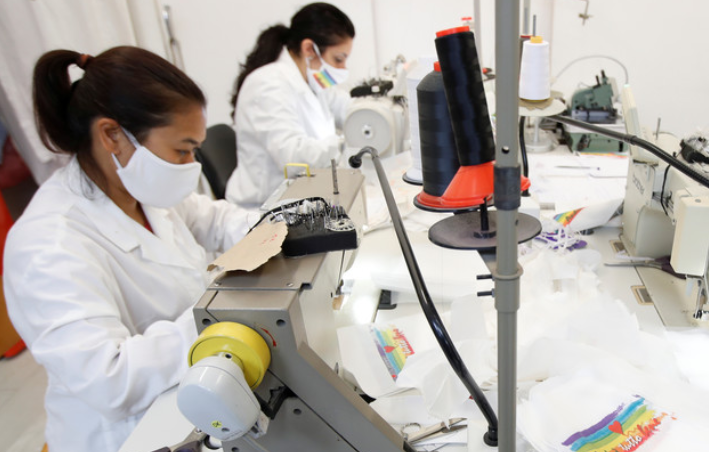 The number of confirmed Covid-19 cases is above 1.25 million, with the death toll now close to 70,000.  Italy, Germany and the US have extended their lockdowns. The number of cases and deaths continues to accelerate in many countries, including the US. The WHO has pointed to indications of slowing rates for both in Italy. Italy will be watched for indications of what may happen elsewhere.  Global equity markets have had another volatile week. Most markets are more than 20% lower than the start of the year. Government bond markets have generally been firmer as a safe haven play.  As a result, 10-year US Treasury yields are back to 0.60% and UK 10-year gilt yields have been below 0.30%. Both are recent low levels.

The RICS house price index will provide one of the first indications of the UK lockdown on house prices. Monday’s construction PMI will give an update on a sector where anecdotal reports suggest that much activity has continued despite the lockdown. Markets expect the headline measure to slip to the mid 40’s from 52.6 in February. Thursday’s GDP estimate for February is likely to show a 0.3% monthly rise supporting the view that UK economic growth was improving before the pandemic hit.  Sterling has continued to claw back some of the sharp losses from early March. It is now around 1.23 against the US dollar and 1.14 versus the euro, around 7% higher than March lows.

Although the number of Covid-19 cases continue to rise strongly, there are some positive signs in Italy.  Data releases from around the world last week showed the pandemic’s growing impact on economic output. March PMIs for many countries pointed to big falls manufacturing and services activity. In China, however, the indices rebounded sharply from historic lows in February. Three of the four Chinese measures moved back above 50, suggesting that the economy is growing again as lockdown measures start to be lifted. Developments there will be watched closely for an idea of how long it will take for economic activity to rebound elsewhere. Meanwhile, Eurozone CPI inflation dropped sharply to 0.7% in March on the back of lower oil prices. Sizeable falls are also expected in other countries.

This week’s European data releases predate the lockdown period and so are of little relevance. The market focus will be on whether EU finance ministers can reach a compromise deal on the issue of coronavirus bonds. There still seems to be some substantive disagreement between European countries.  France, Italy and Spain favour the Covid-19 bonds, whilst Germany and the Netherlands fear the debt and risk-sharing that this could lead to. Their preference is to provide support through the European Stability Mechanism which puts more restraint on recipient’s actions. A compromise is the most likely outcome.  There are reports of a proposal for a temporary fund of up to 10 years, which would release joint bonds but with targeted spending.

In the US, weekly jobless benefit claims will provide further clues on the state of the labour market. Over the last fortnight, these have risen by almost 10 million and another large increase is likely this week. This data provides a further indication of the state of the labour market after last weeks non-farm payrolls showed a fall of 700k.  This was, however, collected too early in March to show the full impact of the lockdown. The unemployment rate rose to 4.4% from 3.5%, though weekly data suggests that the April unemployment rate may move above the last recession high of 10%. The ‘risk-off’ mood helped the US dollar snap its recent downtrend against the euro and it is heading towards the March lows below 1.07.

In another indication for April, the University of Michigan consumer sentiment is expected to hit its lowest level in more than five years. CPI inflation for March is also expected to fall sharply to 1.6% from 2.3% in February. The Fed will also release the minutes of its March policy meetings which saw it enact a number of measures to boost the economy. Brent crude oil has moved back above $32/barrel from a low of $23/barrel with reports of Chinese buying and rumours of talks to restrict output. US President Trump tweeted that he was brokering a deal between Saudi Arabia and Russia.