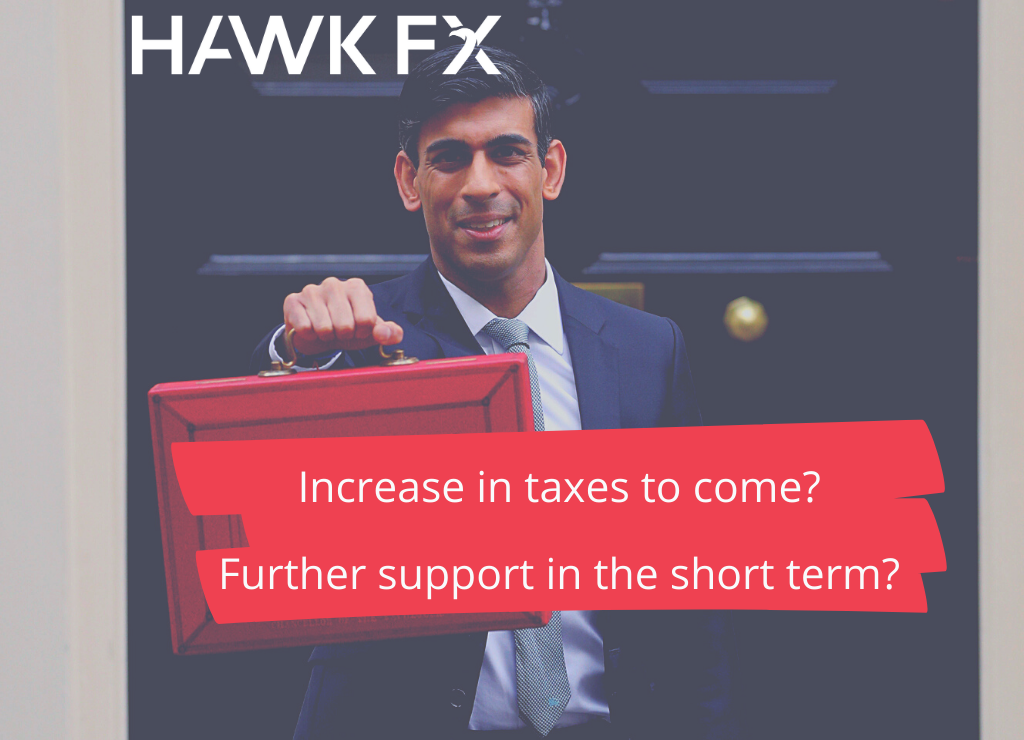 Chancellor Rishi Sunak will deliver the Budget on Wednesday with suggestions that tax increases will be signposted.  Government borrowing has surged over the past year and Sunak has highlighted the need to make this more sustainable.  Some think that a corporation tax increase could be signalled within this Budget.

The immediate focus is expected to be bolstering the recovery and limiting scarring of the economy. The Chancellor may announce a replacement of emergency lending schemes with a new UK state-guaranteed loan programme. The furlough scheme could be extended beyond April helping to prevent a sharper rise in unemployment. Other measures will be confirmed such as changes to business rates relief, the VAT reduction for hospitality and the stamp duty holiday.

Bank of England Deputy Governor Dave Ramsden commented on rising UK yields which are a result of positive news for the economy. Markets are no longer pricing in a move to negative interest rates. Whilst the unemployment rate edged up to 5.1%, business confidence is improving. Manufacturing and construction PMIs will be watched for further insight into how the economy is picking up.

EUR – ECB to look past inflation

The ECB have said they will look beyond higher Eurozone inflation in the coming months.  Officials have warned against rising Eurozone yields with the economy remaining fragile. Eurozone ‘flash’ inflation tomorrow may show a slight rise to 1.0%, following from the increase to 0.9% in January. Energy is expected to drive inflation higher in the coming months.  These temporary increases are unlikely to impact monetary policy. The ECB continue to worry about economic risks due to the relatively slow start to the vaccine rollout.

This week, we will have further updates from the largest economy, with German inflation and unemployment.  We will also see Eurozone manufacturing and services PMIs as a forward indicator.  The Bloc-wide unemployment and retail sales are likely to fall further with the impacts of lockdowns

In the US, the long-awaited $1.9 trillion fiscal stimulus package has passed the House of Representatives, without any Republican support.  The package will now go to the Senate for approval. There may need to be a compromise on federal minimum wage provisions between the two chambers before the bill’s passing.

Former US Treasury Secretary Larry Summers commented that the size of the fiscal package may be excessive and may lead to excess inflation. The Fed, however, has maintained that policy support including further fiscal support is necessary to secure the economic recovery.  The true unemployment rate is probably much higher than the figures show, which remains a major concern for the Fed.

The US labour market has been slow to respond to economic growth which has picked up again.  Weekly initial jobless claims dropped recently, but the trend remains upwards.  After December’s 227,000 fall in employment and a bounce of only 49,000 in January, Friday’s non-farm payrolls are expected to rise by around 150,000.  The unemployment rate may also increase slightly to 6.5%. Without any major surprises, this will confirm that there remains plenty of slack in the economy.