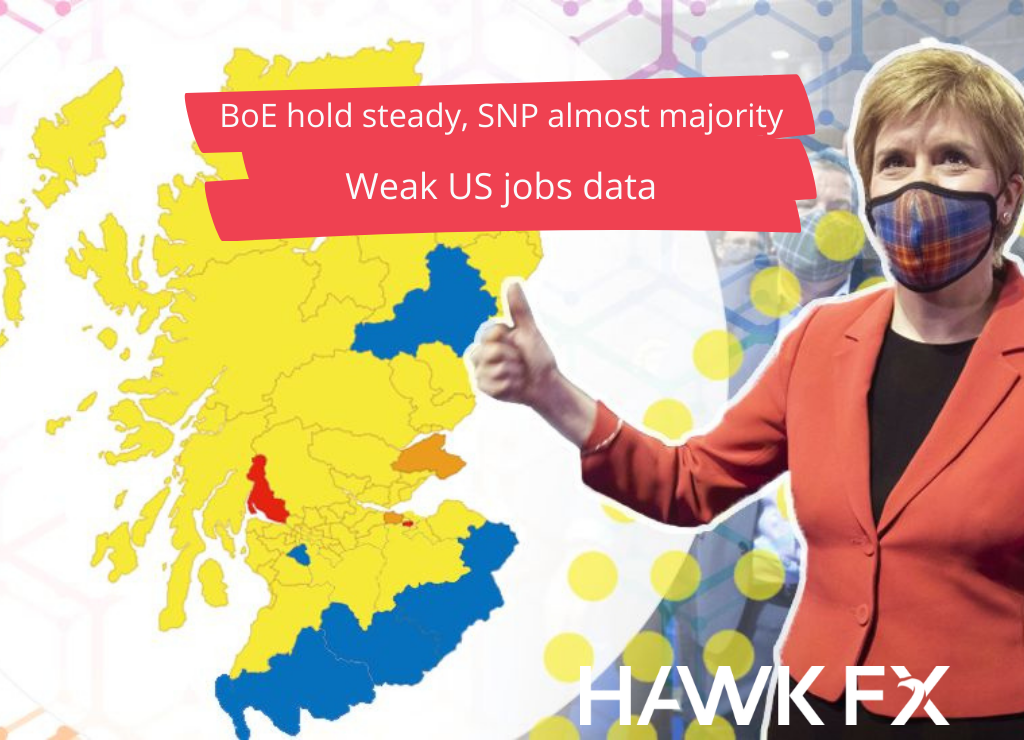 As expected,  the Bank of England held policy stable on Thursday. Bank Base Rate remains at 0.1% with asset purchases maintained at £895bn, though the pace of purchases will be reduced.  There were upgrades to GDP growth for this year from 5% to a forecast of 7.25%.  This reflects a much smaller first-quarter contraction than previously expected and a quicker lifting of Covid restrictions.  With the extension of the furlough scheme, the BoE now expects a lower peak in unemployment at 5.4% and a return to pre-Covid GDP levels by the end of the year.

This week, the main data will be GDP figures for March and the first quarter. We expect GDP to have risen again in March by around 1%, following the fall in January.  The quarter will still see a decline of around 1.5%, though this is likely to be made up in the second quarter given the positive momentum. We will also see the March international trade figures this week.  They will be interesting given the reported disruptions, partly due to new EU trading arrangements.

Over the weekend, the results of the electoral contests were released.  There was a poor showing from Labour, leading to immediate recriminations and a shadow cabinet reshuffle.  Meanwhile, in Scotland, the SNP almost claimed a majority, falling just one seat short.  The results will give the SNP a position to ask for a new referendum.

In the Eurozone this week, the German ZEW survey is the main release. It can provide a useful guide to business surveys later in the month.  The market expectations are for further improvement in the current situation index to -40.0.  The expectations component is also likely to rise above 70 after a fall last month.

Eurozone industrial production is likely to show a rise of about 0.4%, based on recent national figures. The European Commission’s updated economic forecasts will be interesting ahead of the ECB’s update next month. The Commission previously forecast Eurozone growth of 3.8% this year and any changes, will affect markets.

The US economic data last week were softer than expected and tempered some of the enthusiasm over the recovery in America. The non-farm payrolls added 266k jobs which was a big miss to the 900k plus expected.  There were also minor revisions down of previous numbers.  The US has still added 1.8 million jobs so far in 2021.  The unemployment rate also moved higher to 6.1%. The manufacturing and services ISM surveys for April remained strong, however, at 60.7 and 62.7 respectively.

This week, we will get a sense of whether the recovery remains strong with industrial production and retail sales.  The retail sales figure surged by almost 10% in March follow Biden’s stimulus plan so this may fall or provide only a small rise.  Markets expect a 1.3% rise in industrial output and the preliminary University of Michigan consumer sentiment index is also likely to have risen in May. Inflation for April is expected to have increased from 2.6% in March.

Despite the economic data, Federal Reserve officials still see significant spare capacity in the economy and the rise in inflation as temporary. They continue to suggest that there will be no tapering of asset purchases for some time.  The pressure to do so will increase as the economic recovery continues. This week, there are a number of Fed speakers that may clarify their latest views on the economic outlook