Market Report – BoE hike to 1%, but dovish on further moves; Softer EU data as ECB moves toward a rate hike; US Fed hikes 0.5% and suggests more on the way 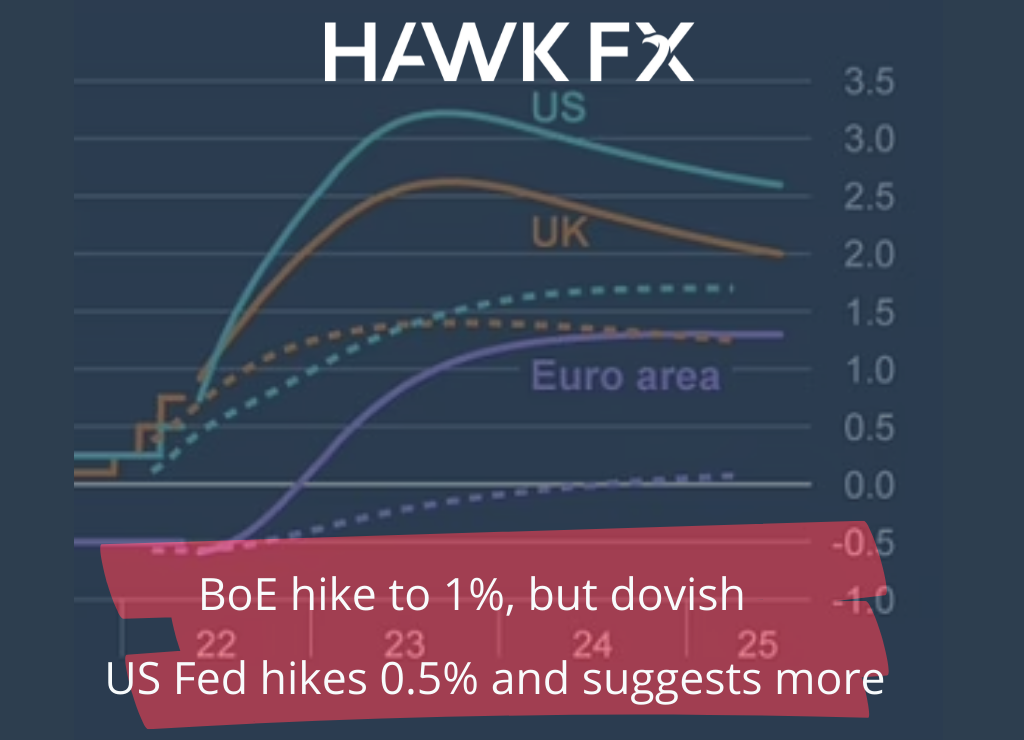 GBP – BoE hike to 1%, but dovish on further moves

The big news last week was the Bank of England raising rates again.  The BoE felt they had to respond to inflationary pressures despite prospects of softer economic growth.  This was the fourth consecutive hike by 25bp to a 13-year high of 1%. The members were split, with three voting for a larger 50bp increase, worried about second-round effects from high inflation. The Bank noted that some further policy tightening ‘might’ still be appropriate. Market expectations are for rates to rise to about 2.5%.  On this basis, growth in GDP would be expected to flatten over the next two years, with inflation expected to fall from a 10% peak this year, back below the 2% target. The reaction to the BoE’s ‘dovish hike’, saw the pound fall below $1.23, but markets still see significantly more interest rate rises than that cautiously signalled by policymakers.

BoE Governor Bailey highlighted the challenging task ahead for policymakers.  They are clearly taking a ‘narrow path’ between economic growth and rising inflation.  After a strong start to the year, with monthly GDP growth of 0.8%, it is likely to continue to slow down.  The figures for February showed only 0.1% growth despite the boost to activity from the relaxation of Omicron restrictions.  A similar level of growth is expected in March, with headwinds for the economy in the shape of higher costs of living for consumers.  This would leave the first quarter GDP showing growth of 1.0%, but this will likely be the strongest level for the year. The BoE is forecasting expecting flat growth in the second quarter.  The Bank of England had predicted GDP growth of 3.8% this year, though this looks like it may be a challenge following the slowdown in the second quarter which may well continue.  We will see a further indication of this with Retail sales this week.

The European Central Bank didn’t have a policy update last week and hasn’t started raising interest rates. However, recent comments suggest it is close to doing so.  Eurozone inflation hit an all-time high of 7.5% in April. The Governing Council appears to be moving towards a first hike the meeting on 21st July. The next ECB meeting on 9 June will be closely watched for an end to QE in early July which would lay the groundwork for a hike soon after. The markets expect the deposit rate which is currently -0.5%, to be raised out of negative territory by the end of the year.

The Federal Reserve led the raising of interest rates last week in a volatile week for markets.  The Fed increased rates by 50bp which was the biggest rise since 2000.  It also confirmed that it will start reducing its balance sheet in June. Chair Powell noted that further rises of 50bp could happen again at the next two meetings in June and July.  This would bring the upper target rate for fed funds to 2% which is closer to the neutral rate estimate of 2-3%. The big question at the moment is whether rates will have to rise above neutral to halt inflation which would also have a more significant slowing impact on the economy.

This week, the focus will be on inflation.  We may have already seen a peak in US inflation unless we get further energy price shocks. We expect annual headline CPI inflation to fall slight to 8.2% in April.  It is likely that core CPI will also have fallen slightly to 6.1% from 6.5%.  There is still uncertainty over how quickly inflation will fall, even if this does turn out to be the peak.  There are signs that inflationary pressures are broadening out with a ‘red hot’ labour market pushing up wage growth. The economy added a further 428,000 jobs in April, with unemployment staying at 3.6%.  Earnings continued to grow at a significant rate of 5.5%.  The Fed will be hoping that as supply issues ease, in goods or labour, it will help to bring down the inflation pressures.