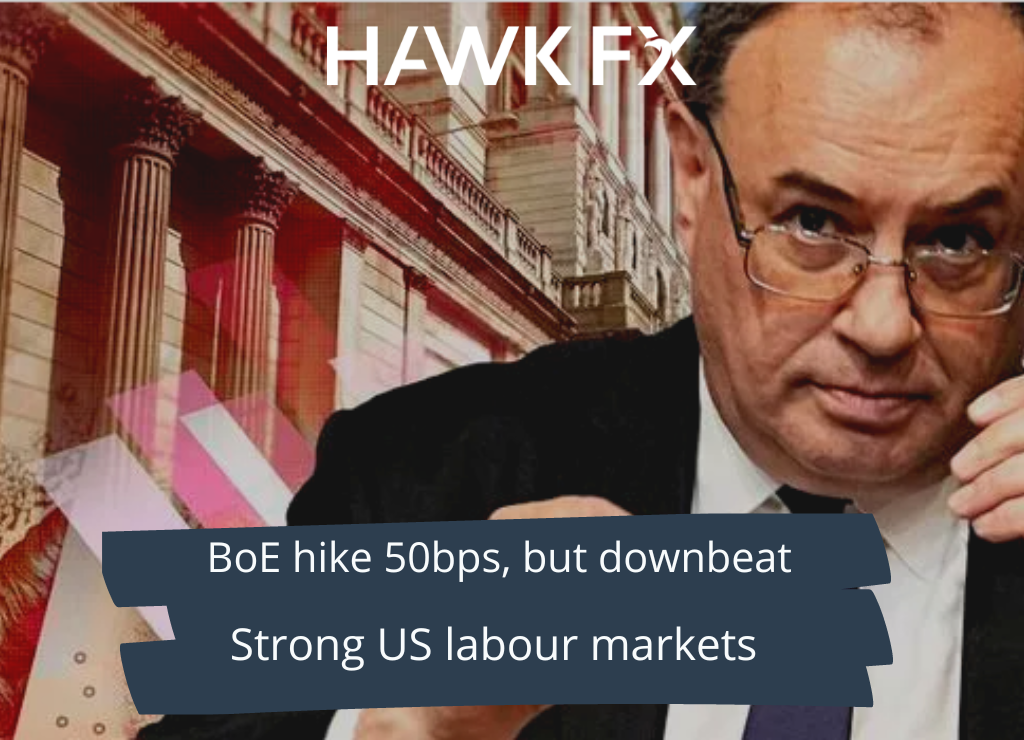 GBP – BoE hike 50bps, but downbeat on the economy

The Bank of England’s Monetary Policy Committee was downbeat about economic conditions, as they raised rates by 50bps.  The BoE suggested that the UK economy is likely to enter a recession later this year which they think could last for over a year. Policymakers expect inflation to move even higher in the short term, potentially reaching 13% as the energy price cap rises again in October. The MPC expect inflation to remain elevated through 2023 before falling back to its target in 2024.

The market reaction to the hike and comments was for sterling and UK gilts to fall sharply.  This is due to greater uncertainty around where interest rates will go and how hard the economic landing could be.  The BoE’s economic projections suggest that interest rates will peak below 3%, though a further 50bps rise could be seen this year. If the new prime minister offers significant fiscal support, particularly on energy bills, this may affect the Bank of England’s thinking.

On Friday, we will see the latest GDP figures.  We expect a monthly fall in June output of around 1%. The figures are skewed due to the impact of the Jubilee, which saw the May bank holiday move to June.  This will create a fall in monthly output.   The overall figure for the second quarter will be flat and may be an overall fall of 0.1%.  In what is proving a challenging year, most expect a bounce back in the third quarter, though we may see a further fall in output in the fourth quarter. The British Retail Consortium survey on retail sales will provide some indications of activity in July.

Last week was relatively quiet in the Eurozone, following the ECB rate hike.  The picture remains one of faltering growth, with the revisions to July PMIs doing little to alter that perception.  Manufacturing PMI was in line with previous forecasts at 49.8, showing marginal contraction.  The Services figure was slightly better than previously expected at 51.2, though this shows a continued slowing of growth.  Meanwhile, the retail sales for the Eurozone fell by a surprising 3.7%.

This week is relatively quiet in Europe, with inflation figures across most of the major nations expected to show continuing upward pressure.  Industrial production for the bloc is likely to show further weakness with growth expected to be around 0.1%.

The main data last week showed a strong labour market.  US non-farm employment rose by 528,000 in July.  In addition, unemployment fell and earnings growth accelerated. This all casts doubt on the narrative around the US slipping into recession.  Following this, the ISM surveys were better than expected for July, though inflation signals were mixed.

This week, the July CPI report will get a lot of attention, particularly after the strong labour market report. Oil prices have fallen in July which will probably have pushed down inflation.  We expect the annual rate to have fallen to 8.8% from 9.1% in June. With oil prices falling further in August, we may see further relief in inflation.  Unless the oil price rebounds sharply, we may now have seen the peak in US inflation for 2022.

Fed policymakers have said that they are looking for “compelling” evidence that inflationary pressures are easing.  This suggests that a further 50bps hike is likely in September.  Recent updates have shown signs of inflation broadening out.  The July report may provide further evidence of this with the annual core rate of inflation rising to 6.2%.