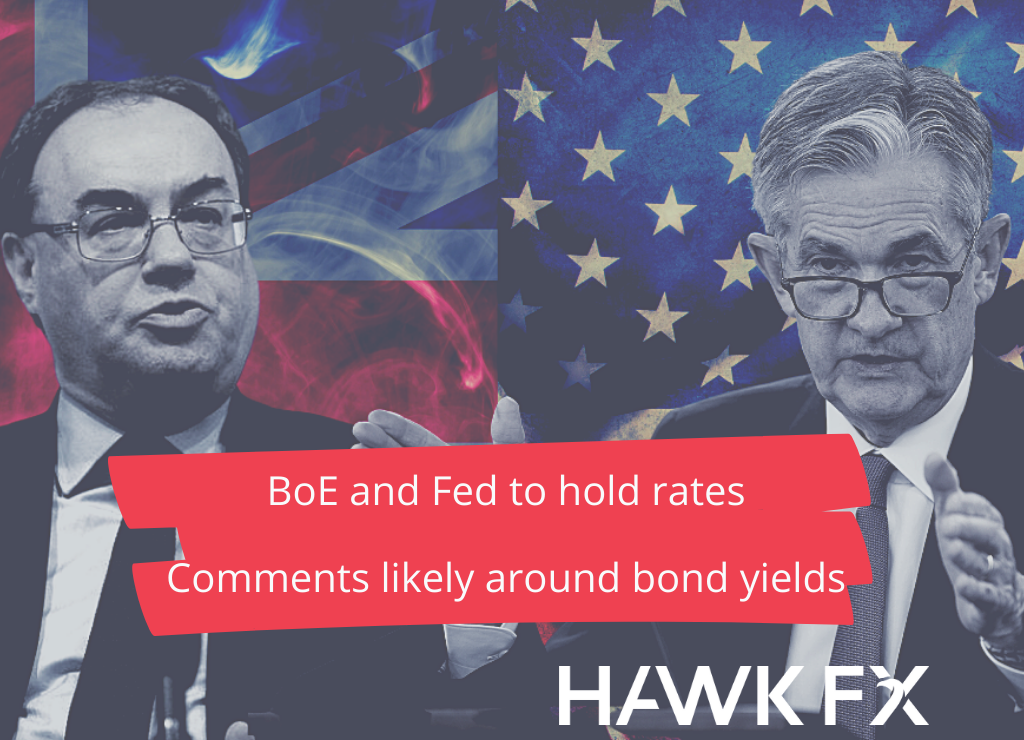 This week, Bank of England (BoE) policymakers are likely to make it clear that monetary policy will remain supportive.  They may comment that markets are wrong to worry about a rise in inflationary pressures. Some policymakers have said that the rise in bond yields may be a justified reaction to the improving economy.

There are no new forecasts or press conference.  However, the commentary in the press statement and minutes will be scrutinised for the BoE’s view on recent policy developments. Since the February update, vaccine rollout has gone well and the lockdown has started to ease. Ongoing support measures were also confirmed in the Budget. These factors will have reinforced the confidence in an economic rebound from moving forward.

Last week, GDP had a smaller-than-expected fall of 2.9% in January.  Services fell 3.5% though manufacturing activity only fell by 1.5%. This suggests that first-quarter GDP will outperform expectations. As a result of this, the Bank may point to upside risks compared to its previous forecasts. There have been suggestions that the BoE may accelerate its near-term pace of asset purchases to help cap the recent rise in yields. The Bank may warn that this is a tool it can use if it deems it necessary.

Last week was volatile in the markets as government bond yields slipped and then rebounded sharply. These market moves were noted by the European Central Bank.  Key policymakers had already expressed concern about the rise in market interest rates.  As a reaction to this, the ECB raised their near-term rate of asset purchases. ECB President Lagarde also said that they will continue to closely monitor the situation.  The only data of the week is the German ZEW survey.

The Biden administration’s fiscal stimulus package passed successfully.  The OECD has said this could raise US GDP growth by more than 3% this year. This has seen US 10-year Treasury yields again rebounding back to new highs for the year.  The US dollar also strengthened sharply against sterling and the euro in the first half of the week before slipping back.

The Fed is likely to retain the existing policy measures.  They will likely reiterate that it is still too early to start talking about cutting back its asset purchases.  It will be even longer before a rise in interest rates. It is unclear whether they will react to the rise in bond yields. They may provide a statement that they are monitoring market developments and that they will act if necessary. The main reason for the Fed to hold policy is that US economic conditions are improving.

Recent data suggests that the US is on course to post a decent first-quarter GDP increase. This is before the impact of the recent fiscal package starts to have an effect. There may be some sizeable changes in Fed policymakers’ economic projections in the latest update. In December, the median estimate was for a 4.2% rise in GDP.  The average of the current forecast consensus, including the fiscal package is for a 5.9% gain. On the whole, the Fed is likely to argue that there is plenty of slack for the economy to grow without generating inflationary pressures. Last week, inflation rose to 1.7% from 1.4% in January, though the ‘core’ rate slipped to 1.3% from 1.4%.