Market Report – Bank of England to hike for 5th consecutive time; ECB to hike in July and September; US Fed to hike 50bps and increase forecasts 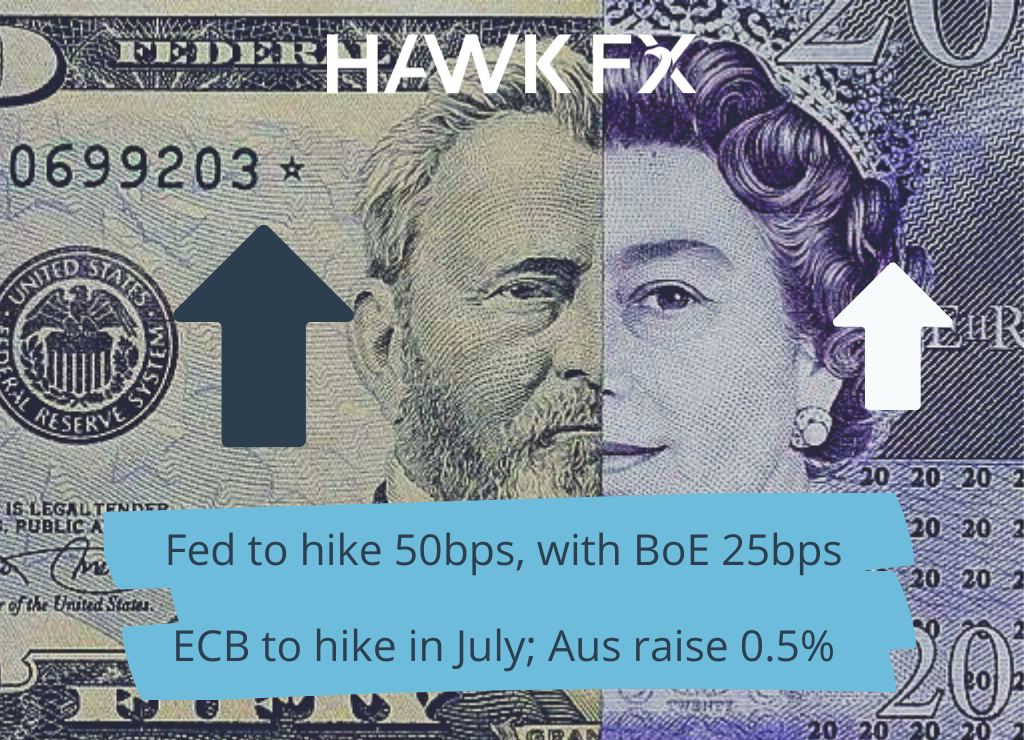 GBP – Bank of England to hike for 5th consecutive time

This week we will see the latest Bank of England policy update with another rate hike expected.  This will be a fifth consecutive 25bps hike to leave the base rate at 1.25%. There is likely to be a split in voting with differing views on the balance of inflation and growth risks. Given the evolution of data, with inflation moving higher and other central banks moving to tighten, we will see whether the MPC signal further monetary tightening.

In the latest projections in May, the MPC pointed to inflation falling below the 2% target in 2024.  Since then, the economic data has been broadly in line with BoE expectations, with inflation at 9% and a tight employment situation.  The next set of forecast updates will be in August, and the Committee may wait to see any changes before updating their policy guidance.  Any hawkish comments relating to further tightening at this meeting will no doubt help to support the pound.

Away from the MPC, we also have April GDP which is expected to rebound to 0.2% following the fall in March. May retail sales may well have fallen again by around 0.5%, if what is proving to be a volatile series.  We also expect the labour market report to show that the market remains tight with upward pressure on wage growth. Alongside revisions to the most recent PMI readings, this all paints a mixed picture for the Bank of England.

EUR – ECB to hike in July and September

Last week, the European Central Bank confirmed that it will probably raise interest rates by 25bp on 21st July.  Going further than many expected, it indicated that it may hike by a further 50bp in September with more to come. The ECB confirmed they would end QE in July ahead of these hikes, with other central banks also taking more hawkish stances, including Australia raising rates more than expected, by 50bps. We will also see updates from the Swiss and Japanese central banks this week.

Bond yield spreads between German and ‘peripheral’ Eurozone markets moved to their widest since 2010. This reflects concerns that global economic growth could slow sharply. The euro had a temporary boost from the announcement but gave back most of the gains. First-quarter growth was revised higher for the Eurozone.  This week, we will see the German ZEW numbers and Eurozone industrial production.

The Federal Reserve seems set to add to the recent aggressive tightening moves by central banks. Markets expect a 50bps rate hike for the second time along with guidance that rates will be raised another 50bp in July. Recent Fed moves have been well flagged and that seems to be the case for the next few months, but the path of rates beyond that is less clear and any comments by the Fed to signal the next steps will be seized on by markets.

There has been some speculation after the July meeting, that the Fed may ‘pause’ or only hike by 25bps. This week, the Fed are likely to give some signal of this intention.  We will see forecast updates this week including the ‘dot plot’ of interest rate projections. The previous update in March showed a median expectation of rates at 1.875% by the end of 2023.  We will be around this rate by July, so this will clearly need to rise, but the path over the course of this year and next will be closely watched for some idea of the expected peak.  We expect to see rates forecast to be closer to 3% by the end of the year, with further rate hikes in 2023.

Away from the Fed, retail sales and industrial production are expected to demonstrate ongoing solid growth.  The other housing data due this week is, however, expected to how housing starts slowing as interest rates rise.  PPI is also expected to show solid growth.