Market Report – Bank of England to hike, but will it be 50bps?; ECB raised rates for the first time in 11 years; Fed hikes again, but future expectations lower 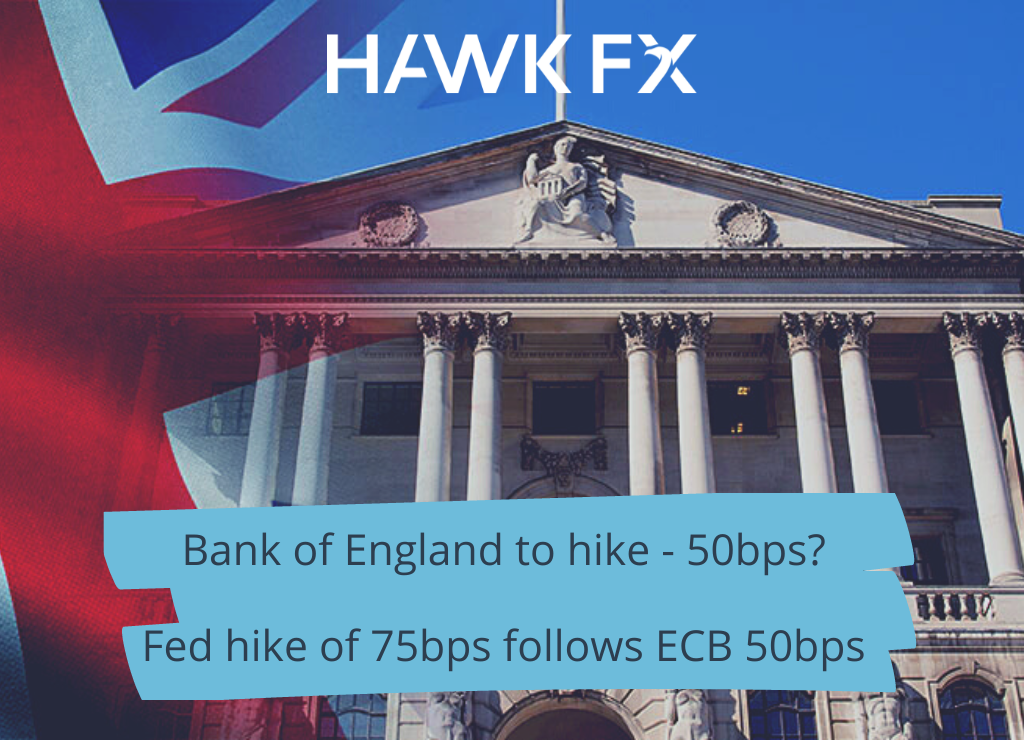 The Bank of England’s Monetary Policy Committee provide their latest update with a sixth rate hike in a row expected.  The previous five hikes have been 0.25%, but there is a chance this time that they could raise rates by 50bps.  Since June, the BoE has suggested a flexible commitment to be “alert to indications of more persistent inflationary pressures” and to “act forcefully”.  Along with central bank comments, this has been taken to mean that a 50 basis point increase is on the table.

Although the markets expect rates to be raised by 50bps, with three members voting for this previously, the future path is less clear. Inflation was higher than expected in June though mainly due to import prices.  The latest labour market report showed softer earnings growth. This softening in measures of confidence suggest that GDP growth could weaken more in the second half of the year.

The Bank of England will also provide updated forecasts, which may highlight that market interest rate expectations of a peak around 3% are excessive. The BoE may well lift its forecast for inflation to peak at 12% in October.  However, the GDP growth forecasts for 2022 and 2023 are also likely to be lowered due to the hit on spending power due to inflation. The PMIs will provide an update on economic activity ahead of the Bank of England and are expected to show further moderating of growth.

EUR – ECB raised rates for the first time in 11 years

The European Central Bank finally raised rates for the first time in 11 years on 21st July.   The ECB followed through with the 50bps move that had been signalled to the markets. This took some pressure of the beleaguered single currency as Eurozone CPI inflation rose to 8.9% in July up from 8.6% in June. The ECB also introduced the new Transmission Protection Instrument.

However, falls in July PMIs for the Eurozone provided more evidence that growth is slowing.  Although Eurozone GDP rose by 0.7% in the second quarter, marking an increase of 0.2% over the first quarter, the falling of the composite PMI below 50 (indicating contraction) is a worry for the ECB.

Last week, the Federal Reserve raised interest rates by 75bp.  This was the fourth consecutive increase and has taken rates 2.25% higher this year.   The policy update noted some recent signs of weakness, though the Fed highlighted high inflation as the big risk. Fed Chair Powell pointed to the likelihood of further rate rises including September.

The theme of falling economic growth continued with US GDP falling by 0.9% in the second quarter.  This is the second consecutive quarterly decrease and therefore marks a technical recession.

Policymakers have asserted that this weakness was not broad-based, however, it is a sharp contrast to the acceleration in GDP growth in the Eurozone. The markets still think that US rates will rise further but by less than previously expected.  Many also believe that the Fed will need to change direction and start cutting rates next year.

This week, the US labour market report will be seen as the next key piece of data.  Fed Chair Powell described the labour market as still strong despite recent rises in jobless claims. Any further  sign of weakness on Friday will raise expectations of a lower peak and earlier pullback in rate moves.  The ISM surveys of manufacturing and services for July will provide important insights on demand and whether supply constraints are continuing to disrupt activity.