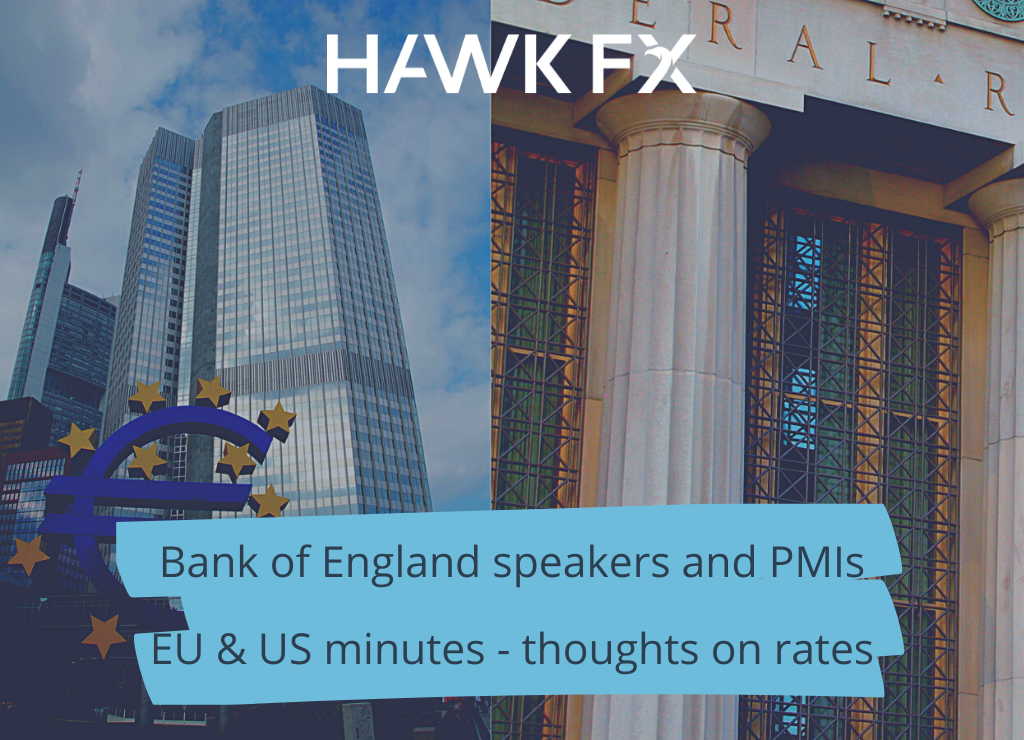 A run of positive data has added pressure on the Bank of England to raise interest rates next month. Inflation jumped to a decade high of 4.2% in October, partly due to energy prices.  Core inflation, excluding food and energy, also increased to 3.4% with forecasts of a rise to 5% next year. The labour market report was also positive, with an increase of 247k in employment and unemployment falling to 4.3%. Further data shows a record level of unfilled vacancies, after the furlough scheme closed suggesting the jobs market remains strong. Retail sales and consumer confidence were also better than forecasts.

This week, there are several Bank of England speakers and PMIs; ECB minutes as Covid situation worsens; Fed minutes ahead of Thanksgiving holiday speakers.  Their speeches will be watched for further thoughts on interest rates. The December decision is likely to be finely balanced again, with suggestions of patience to bring inflation back to target. With a tight decision in December, the Committee still suggest that only modest tightening is likely to be needed. The positive data and expectations of rate hikes saw the pound bounce back after it’s previous slump, to be the best-performing G7 currency last week.

The flash PMIs will no doubt continue to signal expansion, suggestion positive momentum at the start of the final quarter. Forecasts are for similar levels to last month, around 57.5 for manufacturing and 58.2 for services. This highlights the difficulty for policymakers with the difficult trade-off between fostering the economic recovery and tackling inflation.

Compared to other G7 countries, recent Eurozone economic data have been worse than expected.  Covid case numbers are rising significantly in a number of countries, including in Germany, the Netherlands and Austria.  With restrictions being reintroduced, with a full national lockdown in Austria, the near-term outlook for the Eurozone has weakened. With the potential for Germany to impose further restrictions and for other countries to follow, concerns increase around the impact on society and the economy.

The Eurozone flash PMIs are expected to be weaker with services PMI down to 53.5 highlighting a loss of momentum. Manufacturing PMI is also expected to fall, due to lower demand alongside struggle with supply constraints.  The German IFO survey is also set to show weaker data. Despite Eurozone inflation rising above 4%, the ECB remains more committed to keeping stimulus at current levels. The minutes of the ECB’s October policy meeting may provide further thoughts, the they look increasingly isolated with New Zealand and South Korea expected to increase interest rates again as most central banks look to take come action.

Economic data has generally been better than expected in the US, with a potential for upward revisions to further quarter growth forecasts. With recent strong payrolls data, we also saw retail sales and industrial production better than expected. We have Thanksgiving on Thursday this wee so the data will all come out before that.  The PMIs are expected to show continued strong expansion, along with positive consumer spending. The Fed’s preferred inflation gauge, is likely to track CPI higher, and be above 5% for the first time since 1990.

Along with the ECB minutes, we will see the Fed’s November policy minutes.  This may expose a slightly more hawkish tilt. The strong data we have seen recently may lead the Fed to taper asset purchases more quickly.  This would increase the chances of a rate rise next year which Chair Powell did not explicitly rule out. Markets will also be watching to see if Powell keeps his job or whether it will go to Fed Board Governor Brainard. President Biden is expected to make an announcement shortly.