Market Report – Bank of England and mini-budget follow the funeral of Queen Elizabeth II; Swedish Riksbank hike 1%, with Norges Bank and SNB to follow; Fed to hike at least 0.75% for the third time 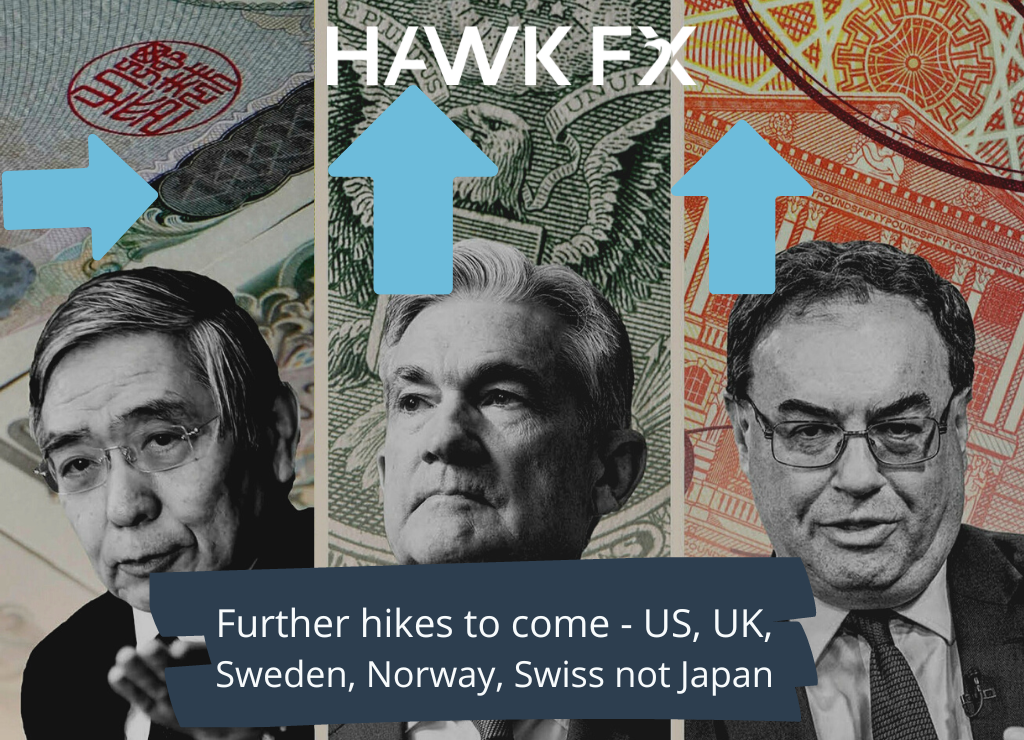 With a shorter week for the UK, following a period of morning and the Queen’s funeral, the Bank of England will now go ahead with their September meeting.  The markets expect a second 0.5% rate hike. There is likely to be a split in voting potentially with votes for smaller and larger hikes.  The most interesting element will be the BoE’s thoughts on the government intervention in energy prices. This will mean that inflation will most likely peak lower than previously forecast.

The government’s fiscal stimulus will, however, boost demand when inflation is already very high. The BoE may well comment that they will wait for more detail on the fiscal outlook and hold a steady course until their next update in November. The Bank of England won’t have long to wait with a ‘fiscal event’ due on Friday.  This will not be a full budget but it is likely to be based around the promises made by Liz Truss during her leadership campaign. These include reversing the rise in national insurance contributions made in April and not raising corporation tax next year. We may also get more details on the energy support arrangements and how they will be funded, along with a closer look at the economic strategy to be undertaken by new chancellor Kwarteng.

In August inflation fell just below 10%, though the ‘core’ rate rose slightly to 6.3%.  Unemployment continued to fall, with a new low at 3.6%, though job vacancies seem to have peaked, despite wage growth accelerating further.  Retails sales fell 1.6% in August and overall the UK data continues to point to a softening economy.  The PMI data is expected to provide further evidence of this. As a result, sterling continues to struggle, hitting new 2022 lows against both the US dollar and the euro.

With a relatively quiet week ahead, the September PMI data is expected to show further weakness in the economies of the Eurozone. We forecast both the manufacturing and services measures to fall further below 50.  These forward-looking indicators suggest a contraction in the Eurozone economy and add further to the challenges of the European Central Bank, on rates, and European leaders, on energy price measures.

Although the European Central Bank is not meeting this week, we have already seen the Swedish Riksbank hike rates by a record 1% to 1.75% this week.  The Norges Bank and Swiss National Bank are both expected to hike rates later in the week to 2.25% from 1.75% and 0.5% from -0.25% respectively.  This continues the theme of central banks hiking rates to stave off inflation.  This is, in contrast, to the Bank of Japan which is expected to hold rates at 0.1% later this week, steadfastly holding ultra-low monetary policy, perhaps hoping to see inflation that has evaded the country for decades.

Along with the Bank of England, the monetary policy updates from the Federal Reserve will be a key focus for markets this week. There is plenty of speculation that the Fed will opt for a third successive 0.75% hike. More recent hawkish comments from Fed Chair Powell suggest there is a strong chance of a 1% hike.  It will also be important what the Fed signals about its future policy intentions. The message will likely continue to be that getting inflation under control is the priority and further rate hikes are likely.

At this meeting, the Fed policymakers update their forecasts, including the ‘dot plot’ of interest rate projections. The previous forecasts showed a median expectation of rates peaking just below 4% in 2024. If they hike by 0.75%, that will take the Fed Funds upper bound to 3.5%, so these projections will be raised, but potentially peaking earlier, around 5% next year. The US dollar has continued to climb across the board on the strength of the economy and expected rate hikes.

Last week, August inflation was down modestly from July to 8.3%, reflecting lower petrol pump prices.  The fall was less than forecast, with ‘core’ inflation also rising by 6.3%. The biggest concern is that ‘core’ inflation is being driven by rises in service sector prices due to the tight labour market. If this proves to be the case, it suggests that inflationary pressures may persist, though we still expect to see a fall from current levels.