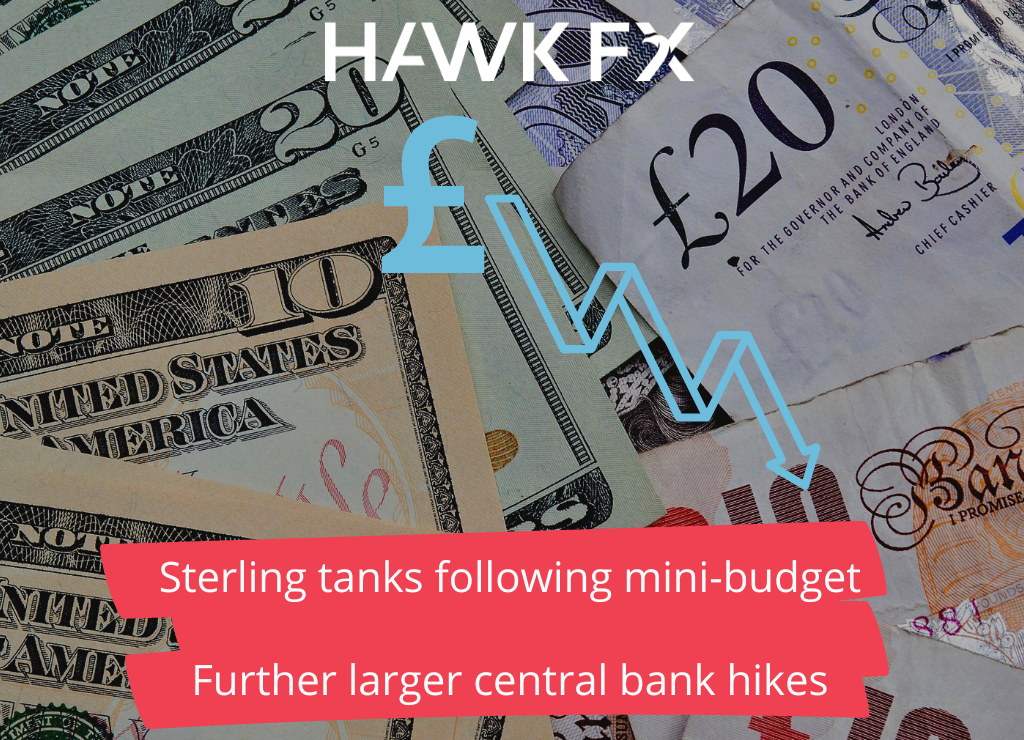 The mini-budget from Chancellor Kwarteng on Friday announced significant stimulus measures. The focus was on tax cuts set out during the leadership election. The planned increase in corporate taxes was cancelled. The standard rate of income tax will be reduced to 19p and the top tax rate will be abolished.  The expected cut to National Insurance Contributions was confirmed. For the homebuyers, the threshold for paying stamp duty on housing transactions was also raised.  As a result of these measures, the budget deficit will be substantially higher in the near term.  The Government forecasts this year’s debt sales to be £72bn higher than previously estimated. Chancellor Kwarteng expects the moves to be self-financing as part of a plan to boost trend growth to 2.5%.

Financial markets did not seem to be convinced as sterling tanked to the lowest level we have seen, close to 1.03. We have bounced higher to levels around 1.07 today.  The Bank of England last week was reticent about offering guidance, merely saying that policy was not on a pre-set course.  This month, the BoE was waiting for the outcome of the mini-budget. It will be interesting to see their expectations on the impact of the measures. Markets are pricing in larger rate hikes in the short term. The voting was split, with 5 policymakers voting to hike by 0.5%, 3 voted for a 0.75% hike and one for a 0.25% rise.

The wider data from the UK was not great news either, with the composite PMI falling further to 48.4 for September.  Consumer confidence also continues to fall, with the measure hitting a new all-time low in September.  This will continue to challenge the Bank of England as they balance inflation and growth.  The recent government intervention may support the economy in the short term, but put longer-term pressure on inflation.

Last week, though the European Central Bank had no meeting, the Swedish Riksbank, Swiss and Norges Bank all raised rates.  The Japanese central bank was alone in holding rates.  We continue to note the dilemma central banks have in balancing inflation risks against falling economic growth. The ECB and other European banks seem to be following the Federal Reserve in trying to combat the former.

This week, we will see the CPI report for the Eurozone. It is expected to rise further in September with annual inflation up to 9.7%.  ‘Core’ inflation rose to 4.6% from 4.3%. That will increase the pressure on the European Central Bank to consider a further substantial interest rate rise on top of the 1.25% increases over the past few months. Along with the balancing act other central banks have, Eurozone PMI data provided a growth warning by slipping further in September to 48.2.  Meanwhile, Eurozone business confidence is likely to deliver a similar message this week. The German IFO survey will also be closely watched for signs of the impact of gas prices and potential supply disruption.

USD – Fed hike 0.75% for the third time to combat inflation

The Federal Reserve raised interest rates by 0.75% at the third consecutive meeting. The median forecast of the policymakers now suggests further hikes totalling 1.25% by year-end with rates rising a little further in 2023. Upcoming comments from Fed policymakers will be watched more closely than ever by markets.  There will be interest in this week’s policy moves and their reaction to the moves in asset prices. Following the latest rate hike, the US dollar remains buoyant, hitting new highs for the year against both the pound and the euro.

This week, Friday’s consumer spending update for August is expected to show a modest rise in real terms. This will also cover the consumer expenditure deflator, which is likely to show a fall in headline inflation but a rise in core inflation.  The Fed in particular is very much focused on combatting inflation, so these numbers will have an impact on their next actions.  Last week, Fed Chair Powell acknowledged growth concerns but said that the Fed had little choice but to follow its course of rate increases.