Market Report – Bank of England expected to raise rates again; European Central Bank hawkish on rates; Fed to hike rates, but by how much? 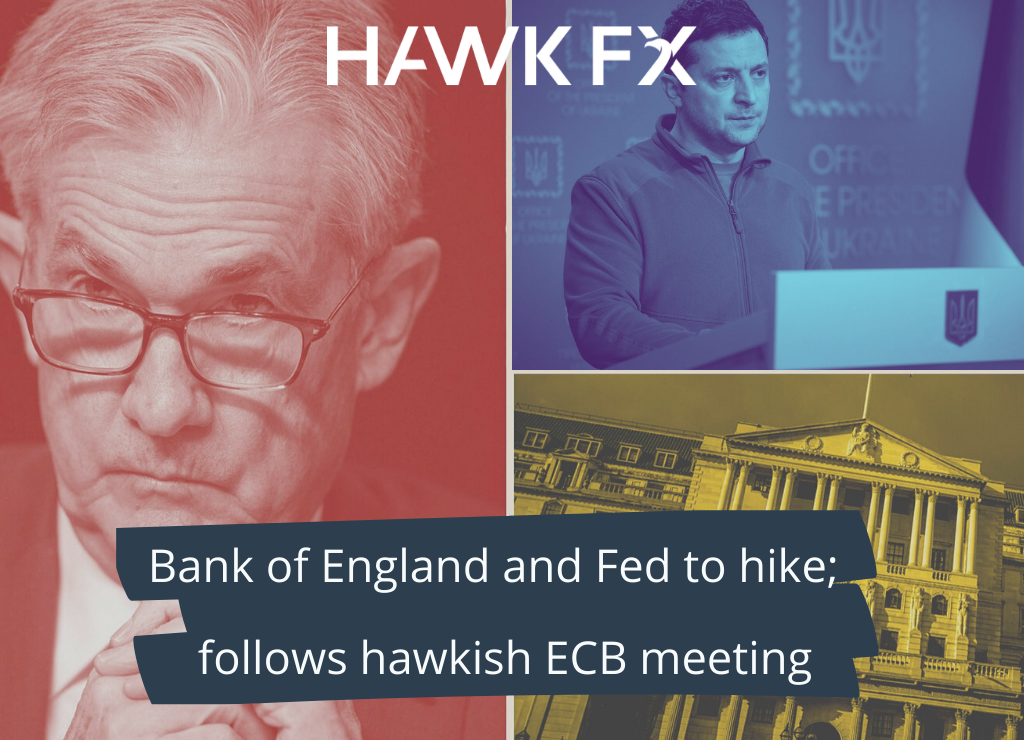 Developments in Ukraine will be high on the agenda of the Bank of England’s meeting this week.  The Monetary Policy Committee has raised rates at the last two meetings in response to inflation moving higher.  Since Russia’s invasion of Ukraine, commodity prices have risen sharply and have added to inflation concerns. Given the rise in oil prices and agricultural commodities, inflation is now expected rise to around 8% this year.

Survey-based measures of inflation expectations have also risen, which will raise further concerns.  As inflation moves even further above target, second-round effects, especially through higher wages can cause inflation to become more entrenched.  The economy has been solid through the first quarter, which will likely give the BoE comfort that they can raise rates without hampering the economy too much.  We expect a further 25 bps rise to 0.75%.

The economy grew by 0.8% in January, rebounding from the December fall due to Covid restrictions.  We expect the labour market report to show the unemployment rate falling back to its pre-Covid level in January.  This tightness in the labour market will not help with the easing of inflationary pressures.

With inflation pushing higher due to the situation in Ukraine, the European Central Bank is wary that inflation may stay above its target for longer. It said last week that it may end its QE programme earlier than expected.  Higher energy and commodity prices will push inflation up further, but the crisis has also increased the risks to economic growth.

The Eurozone remains highly exposed to events in Ukraine, with the bombing of facilities with a few miles of the Polish border.  There is much talk of moving away from Russian energy, but this will all take time.  Volatility in the Euro is likely to continue as we wait to see the wider impact of the Ukraine war on Europe. Industrial production and German ZEW survey are unlikely to provide much insight to the impact of recent events.

USD – Fed to hike rates, but by how much?

Last week, inflation in the US hit a 40-year high of 7.9%. It will almost certainly be higher next month.  Before the invasion of Ukraine, inflation was expected to have peaked by March and to be falling sharply later in the year.  Now, with the increases in energy and commodity prices, this is unlikely to be the case, whilst a labour market with little slack will keep further pressure on.

Against this inflationary and uncertain backdrop, the Federal Reserve is almost certain to increase rates for the first time since 2018.  This was expected even before the invasion.  This first hike was expected to be 25 basis points thought it is not impossible that they may consider a larger move of 50bp.  The dot plot of the Fed’s future rate expectations is also likely to show 4 or 5 hikes this year. Economists expect even more.

A host of data this week will provide further evidence on the near-term strength of the economy.  We will see the latest retail sales, housing starts, home sales and several business and manufacturing surveys.  Ongoing strength across the wider economy may give the Fed cause to move further and faster on rates.