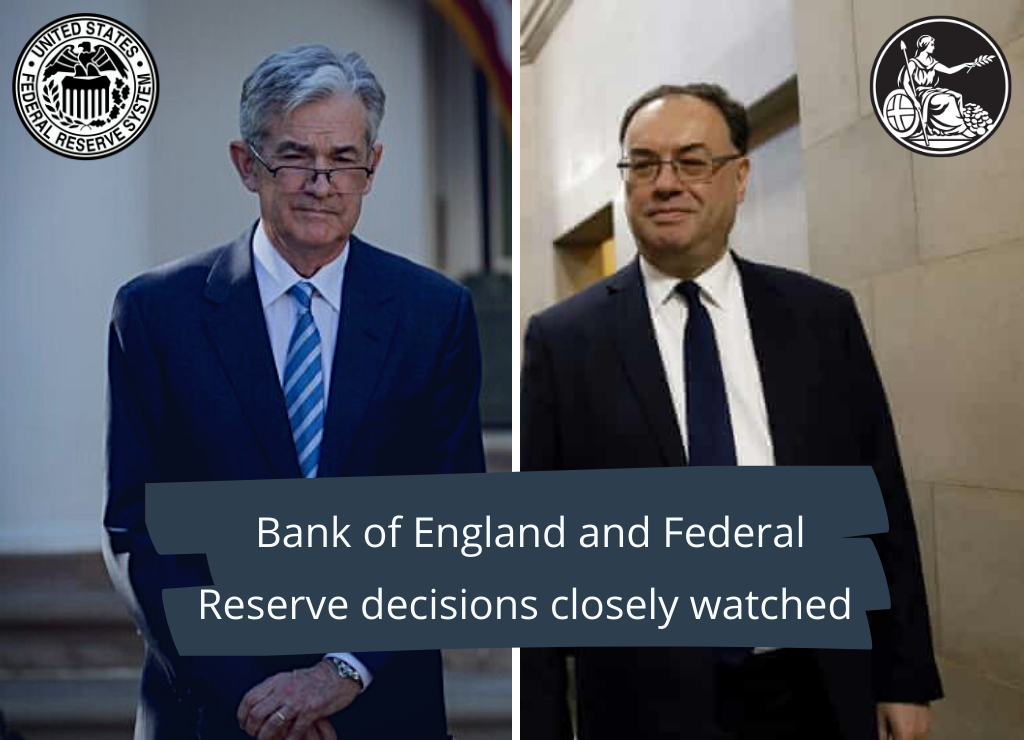 The Bank of England decision on monetary policy is this week. There is plenty of speculation that the BoE will hike interest rates to 0.25%. This is a reaction to the comments that action is required due to the inflationary pressures from BoE Governor Bailey and Chief Economist Pill.  Some members of the Monetary Policy Committee have said that they are not ready to vote for a hike yet. This is likely to be a close call with some policymakers hoping that an early move may stabilise inflation expectations.  The voting split will no doubt provide further interest along with comments about future moves.

The markets currently expect several more rate rises over the next 12 months, taking the base rate up to 1.25%. If the MPC do raise rates, they may note that they do not expect such a sequence of rate hikes.  The details of the BoE’s latest forecasts in its Monetary Policy Report will also be closely watched. Bond markets have had mixed reactions over the past week, with expectations of rate hikes potentially slowing down economic activity.

Last week, the Budget forecasts saw lower deficits compared to previous estimates.  The increase government spending is also a significant change from previous Conservative budgets. This week, beyond the Bank of England decision, the markets will be looking at whether the Purchasing Managers Index readings continue to point to a slowing down in activity.

Last week, the European Central Bank left policy unchanged, as expected. From the comments, the central bankers still see the inflation rise as temporary and do not seem inclined to take any action in the near future.  This is in sharp contrast to the US, UK and others, with the Bank of Canada last week providing further evidence of rising inflationary pressures and the feeling of a need for action.  In the Eurozone last week, inflation rose to 4.1%, with core inflation rising to 2.1%. It is no surprise that even where the ECB remain adamant that inflation is transitory, markets are still pricing in the risk of rate hikes in the fairly near future.

The Eurozone grew by a similar amount to the second quarter, at 2.2%. This week, we will have updates on the Eurozone unemployment rate, retail sales and manufacturing and services PMIs.  We will also hear from the Norges Bank, with their policy update.

The Federal Reserve will also meet this week and is expected to announce a start to the tapering of its asset purchase programme. Fed Chair Powell said as much in his latest comments. It was generally assumed that the Fed would announce an initial reduction of $15bn to its $120bn monthly programme. This would lead to an end of the process, with similar monthly reductions, by the middle of next year.  Recently some Fed policymakers have suggested that they would prefer a faster rate of reduction. If the decision is a quicker pace of tapering this will be seen as a hawkish signal that rate hikes may come sooner.

Beyond this week’s policy statement and press conference, the US labour market report will still be of interest. A strong rise for October Non-farm payrolls could further fuel expectations that the Fed will need to tighten policy more aggressively.  We will also see Construction spending, ISM manufacturing and services and Factory orders. With GDP growth slowing to 2.0% in the third quarter, from 6.7% in the second, forward looking data will build a picture of how 2021 is likely to finish.