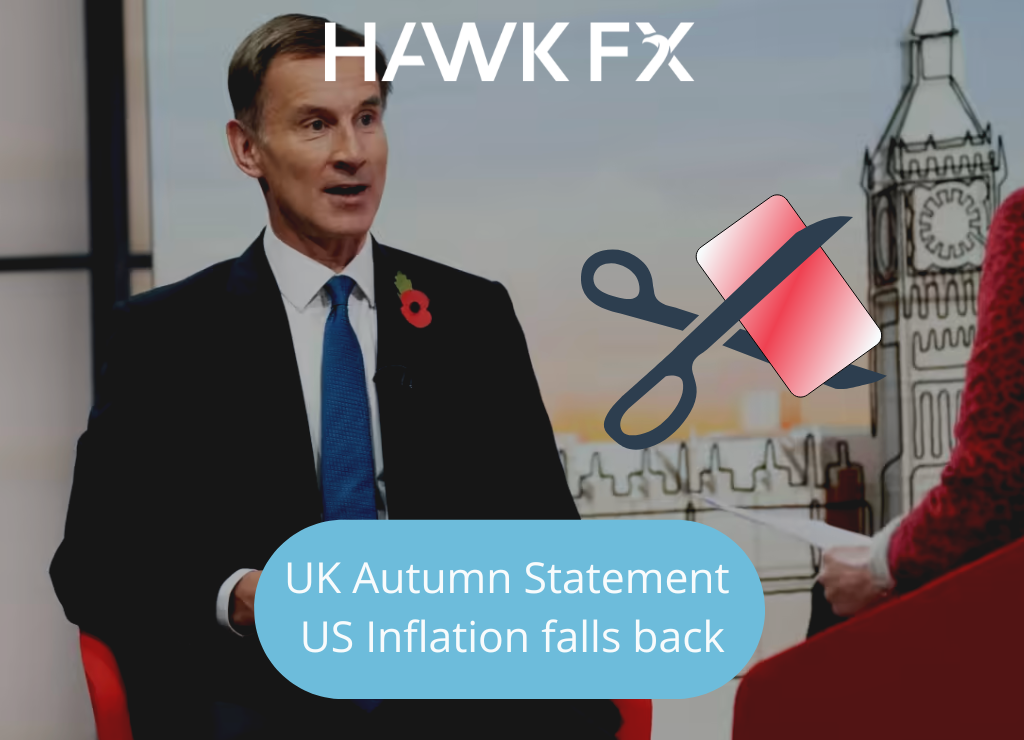 The main event this week is the Chancellor’s Autumn Statement on Thursday.  The fiscal update will come alongside the latest forecasts from the Office for Budget Responsibility. The Bank of England’s latest forecasts were a couple of weeks ago, so any differences will be scrutinised. The BoE forecast a significant fall in inflation over the next couple of years.  This is due to forecasts of falls in GDP for the next six quarters through to 2024. The OBR forecasts will take into account the new measures announced by the Chancellor.

The Chancellor is expected to set out measures to offset a deterioration in government finances due to increased spending. The information released in the press suggests tightening of £50bn to £60bn split between 60% in spending cuts and 40% in tax increases. A key question will be whether benefits and pensions retain their existing links to inflation, which would substantially increase costs. There may be a windfall tax on oil and gas companies. A further question will be how energy prices are dealt with after the current scheme ends in March.

Beyond the Autumn statement and forecasts, we will also see October inflation figures this week, expected to push higher to 10.5% due to energy prices, despite the price cap.  Core inflation is likely to have fallen slightly to 6.3%. The figures last week showed that GDP fell by 0.6% in September and by 0.2% in the third quarter.  This highlights the challenges faced by the UK economy.  The labour market report is also likely to show a cooling market.  The unemployment rate will probably remain at 3.5%, though wage increases may be slowing down.  Consumer confidence and retail sales figures are also likely to confirm a challenging picture for the UK economy.

We have a rather quieter week in the Eurozone, with no recent or upcoming central bank meeting.  The German ZEW survey may point towards an improvement in economic sentiment for November, as we have seen a fall recently in gas prices.  With some forecasts of a warmer winter, there is hope that the country may not need to take some extreme steps such as restrictions on power.  The level for the ZEW survey will no doubt remain extremely low by historic standards.  The figures for growth in the Eurozone are expected to remain in positive territory at 0.2%.

Market expectations were changed last week by lower-than-expected October inflation data.  This suggests that interest rates may not need to rise as much as previously thought. The fall to ‘only’ 7.7% inflation boosted the market move with equities moving nearly 6% higher on the day.  Treasury yields on 10-year government debt dropped by around 0.3%.  The US dollar fell as a result of this reversal in direction and hit the lowest against sterling since August. Federal Reserve speakers have suggested there will still be further rate hikes, though these may be at a slower pace.

The mid-term elections were less damaging for the Democrats than expected.  The Republican Party regained control of the House of Representatives but failed to match expectations of a red wave.  The Democrats retained control of the Senate, so Joe Biden will retain more control than expected for the final two years of his presidency. For the rest of this week, we have some data, which will likely paint a mixed picture of US economic activity.  Retail sales and industrial production are expected to be up in October but indicators in the housing sector will likely have posted further falls.