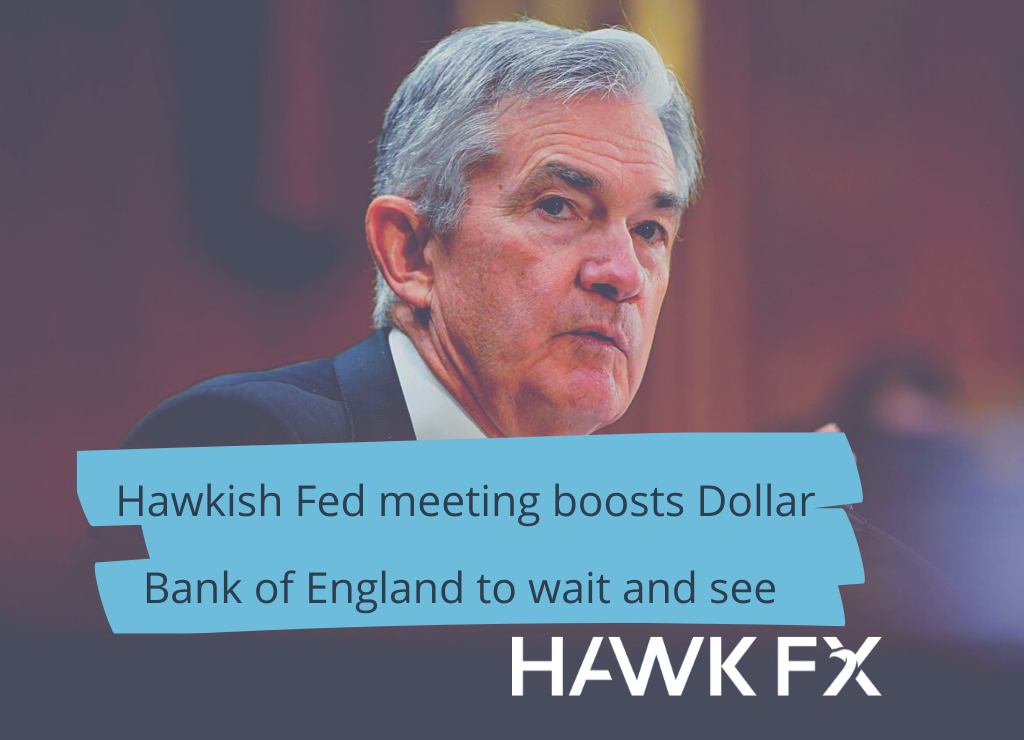 The Bank of England policy update will be the main focus for markets on Thursday, following the US Federal Reserve’s more hawkish tone. The BoE is almost certain to leave policy settings unchanged.  This includes total asset purchases at £895bn and Bank Rate at 0.1%. It will be the last MPC meeting for chief economist Andy Haldane.  He has been the most hawkish member in recent years and is expected to vote, on his own, for a reduction of bond purchases. The BoE will likely discuss stronger near-term growth and inflation.  However, the minutes of the meeting may be less hawkish than the US, because of the delta Covid variant and delays to lockdown easing.

Annual CPI inflation surprised last week with a higher than expected rise to 2.1% in May.  This inflation rise mainly reflected factors that are expected to be temporary, including energy, supply chain costs and services prices linked to the reopening of the economy. Employment also increased in the three months to April whilst the jobless rate fell to 4.7%.  These figures are likely to be boosted by the previous easing of restrictions.  Sterling had a bad weak against the US dollar, with a stronger dollar and UK Covid cases rising above 10,000 per day.  The government confirmed that ‘removing all legal limits on social contact’ will be delayed to 19 July to allow more time for vaccinations.

This week we will see June flash PMIs, GfK consumer confidence and CBI industrial and retail surveys.  Small further increases are expected from the PMI figures for services and manufacturing PMI (well above 60), which would suggest ongoing strong growth. Consumer confidence is also expected to continue increasing despite the delay in easing of restrictions.

There is further central bank action this week with President Lagarde’s appearance in the European Parliament today.  She will likely reiterate her comments from the European Central Bank’s latest meeting.  At this meeting, the ECB upgraded the risks to the economic outlook to ‘broadly balanced’. The ECB did still keep asset purchases at the higher pace than in the earlier this year. ECB policymakers have noted that the US recovery is more advanced than the Eurozone and they will monitor any changes to tapering of asset purchases.

We expect see more concrete improvements in the June flash PMIs this week. They have been lagging behind the US and UK, but appear to be improving with the acceleration in vaccine rollout. We expect Eurozone services PMI to increase to 59.0 from 55.2, which would be a third month of expansion. Manufacturing activity is also expected to stay strong with a reading around 63. These figures would support a return to growth in the second quarter and beyond. The German IFO business survey is also likely to show positive improvements.

Last week’s biggest market moves were a result of the Federal Reserve policy update. Interest rates and the pace of asset purchases were unchanged, as widely anticipated.  However, a more hawkish Fed Chairman Powell indicated that policymakers may soon start talking about reducing its asset purchase programme. Powell suggested again that price pressures are likely to be temporary, but he did acknowledge the risk of higher prices. The ‘dot plot’ still shows a very shallow path for interest rates.  The majority of policymakers expect no increase in rates for 2021 or 2022.  There is now a minority that see a rate rise in 2022, with a bigger change to 2023 expectations.  The consensus is now for two hikes of 0.25% in 2023, compared to a previous small majority in favour of no change.

This outcome was a hawkish surprise and saw the US dollar strengthen across the board, moving well below 1.40 against the pound and 1.20 against the euro.  The focus for the US will remain on the outlook for monetary policy.  There is a host of Fed speakers this week, including Chair Powell’s testimony to Congress.  This testimony is based around the lessons learned from the Fed’s response to Covid and will include the outlook for the asset purchase programme.

There are also a number of data releases this week, with the personal consumption and PCE inflation as highlights.  We forecast core PCE inflation to rise further above 3% to around to 3.4%.  Consumption probably increased despite weaker retail sales, helped by spending on services. Other data releases include the flash PMIs, new home sales, durable goods orders and the third estimate of first quarter GDP.  These are all expected to led further support to the generally improving economic situation.