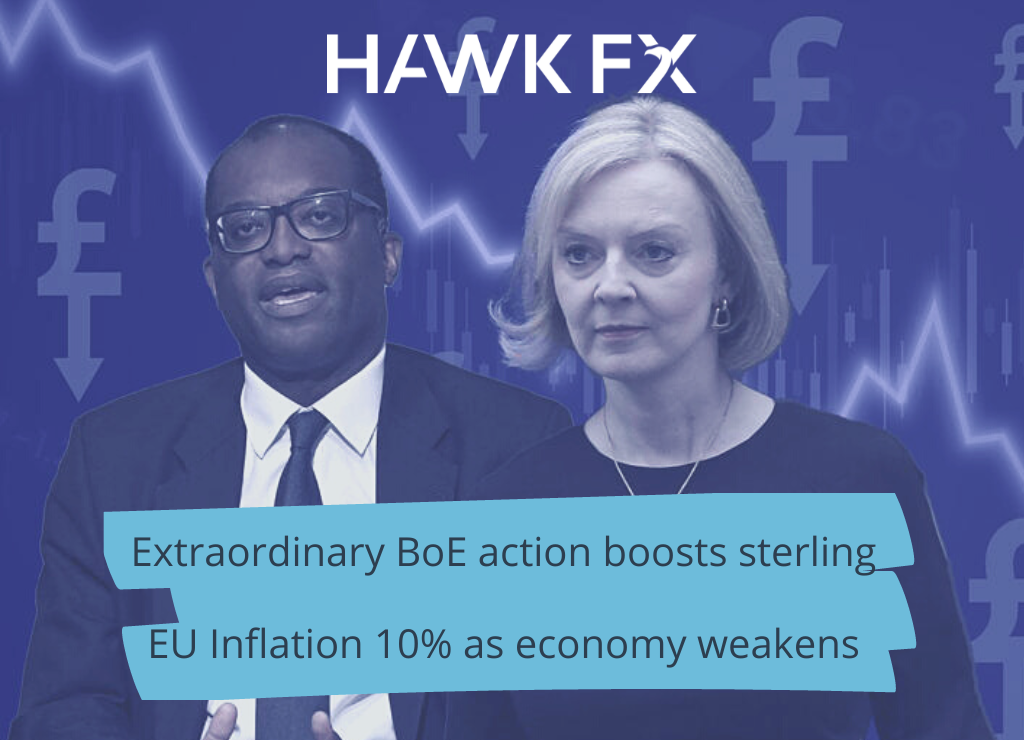 Last week, we saw sterling fall to a record low of $1.04 against the US dollar on concerns over the Chancellor’s growth plan.  Then came the extraordinary BoE action, with emergency measures amid the turmoil in markets.  The BoE delayed its planned active gilt sales and intervened to temporarily buy long-dated Gilts.  The 30-year gilt had soared above 5% but fell back below 4% after the BoE action.  The Chief Economist, Huw Pill said a ‘significant monetary policy response’ will be required at the November meeting. He did, however, play down the likelihood of an interest rate hike before the next meeting. Markets are still pricing in at least 1.25% of increases (to 3.5%) by early November and forecast rates above 5.5% next spring.

Following the action of the Bank of England, sterling has stabilised back above 1.10 to the dollar and higher across the board.  Although the government’s fiscal plan aimed at boosting long-term growth spooked markets, it was lauded by business organisations.  The main issue was the lack of an independent economic assessment from the Office for Budget Responsibility (OBR). The Chancellor will deliver a Medium-Term Fiscal Plan with new OBR forecasts on 23rd November.

The focus this week will be the Conservative Party conference. Prime Minister Liz Truss is scheduled to deliver a closing speech on Wednesday, under pressure as the latest polls point to a wide lead for Labour. Chancellor Kwarteng has already confirmed that the top rate tax rate will not be removed to placate his backbenchers.  The final readings of the September manufacturing, construction and services PMI survey, will also be watched to see whether they are slipping into further contraction.

Inflation continues to soar in the Eurozone, with the flash September estimate hitting 10%.  This is a marked increase from 9.1% in August and higher than forecasts.  This will add to concerns for the European Central Bank with core inflation increasing by 4.8%. The ECB will have to balance these inflation increases against a slowing economy shown by the weaker German IFO survey and the Eurozone economic sentiment index.  Energy insecurity is a major risk while the monetary policy tightening is expected to continue in the coming months.

This week will see the ‘account’ of the ECB’s September meeting. At that meeting, interest rates were raised by a record 0.75%. The ECB has stated that future policy decisions will be data-dependent, taken on a ‘meeting by meeting’ basis.  There may not be too much to take from the account of the September meeting unless they highlight particular concerns or measures they are looking at.  President Lagarde has indicated that more hikes are expected in the two policy meetings this year.  Like other central banks, the ECB is aiming to frontload hikes to bring inflation under control.

Being the first week of the month, the spotlight will be on the September labour market data on Friday. Last month’s labour figures were described by some as ‘goldilocks’,  not too hot, not too cool.  Non-farm payroll growth slowed but remained strong at 315k with wage growth showing signs of cooling. The unemployment rate rose to 3.7% from 3.5% driven by higher participation. The Federal Reserve will no doubt be watching these figures closely.  Indicators point to another good month for job growth with most expecting a similar number of around 300k jobs.  Earnings growth will be closely watched after rising by 0.3% month on month and may tick higher.

There will also be a significant focus on assessing the damage from Hurricane Ian. It seems unlikely to affect Fed monetary policy which remains focused on getting inflation back down. This week’s data are not expected to alter the Fed’s plans for significantly further tightening. The ISM manufacturing and services reports for September are expected to remain above the 50 growth/contraction threshold.  Factory orders and construction spending are also likely to portray a solid economy.